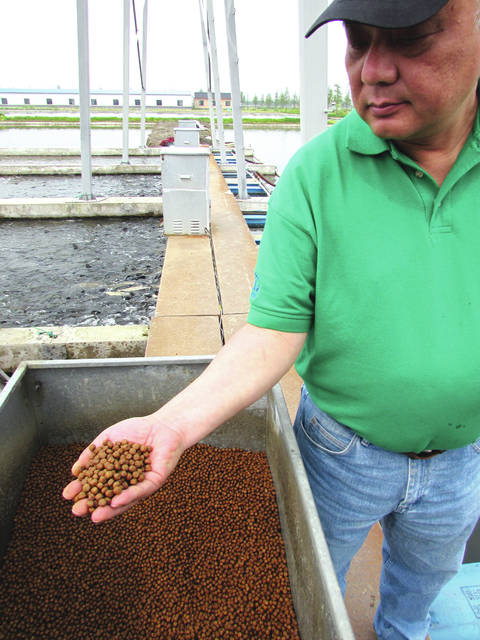 Jim Zhang of the U.S. Soybean Export Council, holds a handful of fish feed at an aquaculture facility on the outskirts of Shanghai, China in April, 2016. Rural Life Today editor Gary Brock toured the Chinese fish farm facility to see where much of Ohio’s soybeans go when exported to China. The fish feed is made of about 50 percent soy meal.

COLUMBUS — Ohio farmers and soybean producers should be very worried about the possible trade war with China, in addition to the ongoing concerns about trade with the NAFTA renegotiations, according to Dr. Ian Sheldon, Ohio State Professor and Andersons Chair of Agricultural Marketing, Trade and Policy.

“We are failing to follow logical processes of dealing with China and influencing the way trade occurs,” Sheldon said Monday. “Tariffs are not a good way of doing it.”

Last week, President Donald Trump signed an executive memorandum that would impose tariffs on Chinese imports of up to $60 billion. China retaliated Friday with its own set of levies, drawing up a list of 128 U.S. products that could be possible retaliation targets.

When asked about China accusing the U.S. of breaking international rules, Sheldon said that the U.S. has appealed to the argument that steel and aluminum imports are undermining national security. He said that national security is a subjective concept and is a “dangerous track down which to go.”

“The more we ratchet up our tariffs the more [China] will respond,” said Sheldon. “The national security argument is a dodgy one. The World Trade Organization is not working well in controlling China.” He said that the more the US increases tariffs, the higher the potential for China to target specific commodities, including soybeans.

On Monday, however, there were reports that trade tensions between the U.S. and China may be easing — slightly.

The Financial Times reported China has offered to buy more semiconductors from the U.S. to help cut its trade surplus with the U.S. The Wall Street Journal also reported that U.S. and Chinese officials are working to improve U.S. access to China’s markets, according to CNBC.

Investors “have apparently recognized that a trade war is in no one’s best interests and therefore extremely unlikely,” said Jeremy Klein, chief market strategist at FBN Securities, in a note. “Specifically, the President merely wants to fulfill a campaign promise while China will only enact token countermeasures to appease its citizens.”

Any trade taxes or tariffs between the two countries would go into effect in April, at the soonest.

Highland County farmer Nathan Brown said he has faith that President Donald Trump knows what he is doing in the present trade-tariff showdown.

“I hope our president knows what he is doing,” Brown said Monday. “As a farmer and part of the rural community that supported the president, if this tariff ends up hurting the farmers, it would be a slap in the face. If prices fall it could be really detrimental to the agriculture community.”

Brown pointed out that as president, “What he (Trump ) has done so far has been favorable to the farming community.”

Brown, a member of the Ohio Farm Bureau Board of Trustees, has been to China to see just where his soybeans go. Several years ago, as part of a U.S. Soybean Export Council tour, Brown toured Asian markets where American and Ohio soybeans are sold, including China and Viet Nam.

“As a soybean producer, it does make me a little leery,” he admitted. He pointed out that most of his soybeans head south to Cincinnati where they then head to China.

But Brown is an optimist. This spring he will be planting grain on about 800 acres in Highland County, and 80 percent of it will be soybeans.

He said that if the Chinese market does become more restrictive for American soybean producers, “This could hinder us, or it could open up new markets and new opportunities for us.”

Beijing had previously indicated it will take action against the soybean and corn industries in retaliation for any U.S. tariffs on China. China is the biggest buyer of U.S. soybeans, taking $14.6 billion worth in the last marketing year — more than a third of the entire crop.China is also the American farmer’s biggest customer, followed by Canada and Mexico in U.S. agriculture exports.

On March 22, President Trump granted exemptions on steel and aluminum tariffs to the EU, South Korea, Australia, Brazil and Argentina — but not China.

“Now that the U.S. has backed away from the other countries, it looks discriminatory against China,” said Sheldon. And he added that according to the World Trade Organization (WTO), that’s against the rules.

WTO is the organization designed to regulate trade. Dr. Sheldon posed the question: why we are undermining the very institution mechanism that is made to deal with these issues?

Sheldon said that if the true concern is the claim that China is stealing U.S. intellectual property, then the U.S. should file a proper dispute through the WTO. “The U.S. should go through the proper international process before taking unilateral action to China,” Dr. Sheldon said.

Sheldon added that another way the U.S. was trying to deal with this issue was the Transpacific Partnership (TPP) between 12 countries, which President Trump backed out of when he was elected.

“That agreement was going to put in place rules that are not in the WTO,” said Dr. Sheldon. “The idea was to put in place a trade agreement that if China was to ever join it, they would have to play by those rules.”

He said that by backing away from TPP, we’ve given up an influence or a say of how China can trade with these with other countries.

“We would definitely be affected (by a trade war)” said Fayette County farmer Wes Montgomery.

Montgomery and his family farm about 1,500 acres split between soybeans and corn. “I’d say it is definitely a concern by us.” He added that it appears soybean prices have taken a hit since the tariff news spread last week.

“Agriculture is pretty dependent on the export market.” Montgomery pointed out. Last season, he said they took a lot of their beans to Cincinnati, “And that’s where they go for export.”

He said he and fellow farmers are keeping an eye on the trade situation, adding that China’s pork market depends on soybeans for their feed meal, and “they would like to be less dependent on the U.S. for that meal.”

Sheldon also touched on the possibility of Mexico and Canada dropping out of North American Free Trade Agreement (NAFTA) if they don’t accept the US’s proposals. “This could do a lot of damage to US agriculture because with prices being quite low, exports matter a lot,” he said.

Sheldon said that this would lead to U.S. losing import market share and would drive down immediate prices, causing both medium and long-term effects.

Jim Zhang of the U.S. Soybean Export Council, holds a handful of fish feed at an aquaculture facility on the outskirts of Shanghai, China in April, 2016. Rural Life Today editor Gary Brock toured the Chinese fish farm facility to see where much of Ohio’s soybeans go when exported to China. The fish feed is made of about 50 percent soy meal.