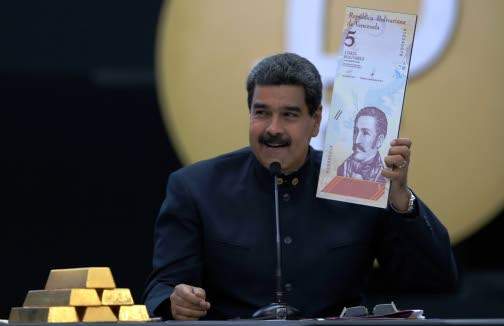 CARACAS, Venezuela (AFP) — The government of crisis-torn Venezuela, struggling to overcome chronic liquidity shortages and burdened by US sanctions, launched the first government-backed cryptocurrency, the petro, earlier this year.

But while Nicolas Maduro’s administration hopes a currency backed by the country’s vast oil reserves can lead the nation out of the financial woods, there are precious few people who know how to use it — even if they can access it.

The digital “coin” became available to the general public last Friday following a month of US$5 billion worth of pre-sales across 133 countries.

Yet it comes to the domestic market surrounded by confusion, despite a blizzard of media coverage, not least with the government and Maduro having given different official launch dates.

The confusion led one department store to place prominent signs in its shop windows informing customers that “we accept PETRO as a means of payment” — only to remove them within hours with staff unable to help those wanting to avail themselves of the opportunity.

“We don’t have information on how to take payment from clients” wanting to use the petro. “That’s why we took down” the signs, one store manager told AFP on condition of anonymity.

So-called cryptocurrencies — generated by computers — are “a very technical concept” which “not everybody necessarily knows how to use”, noted Asdrubal Oliveros, an analyst with consultancy Ecoanalitica.

Venezuela’s economic woes have much to do with the slump in recent years in the price of oil, which accounts for some 96 per cent of the country’s revenue.

US economic sanctions have also taken a heavy toll.

Washington has banned US citizens or anyone using the US financial system from using the petro.

Several credit agencies consider Venezuela and state-backed oil giant PDVSA to be in default of its financial obligations owing to late capital or debt interest payments.

Despite having the world’s largest proven crude oil deposits, Venezuela’s foreign reserves have dwindled to US$9.5 billion while it must pay off some US$8 billion this year.

Experts doubt the petro can succeed in the current parlous economic climate with public debt standing at 20 per cent of the country’s annual economic output and hyperinflation that hit 13,000 per cent this year, according to the IMF.

Yet Maduro wants the virtual currency to become a widely used means of payment by Venezuelans. Last week, he ordered use of the petro for state financial business — including PDVSA operations.

Tourism is another sector where Maduro wants petro transactions.

Yet Ariadna Zamora, who runs a travel agency, is not alone in having no idea how to go about it.

“Nobody has explained anything whatsoever to us. How can you have confidence in something you don’t know?” pondered the 52-year-old.

Maduro has said people will in due course be able to purchase petros in euros, Russian rubles, Chinese yuan, Turkish lira and three of the main cryptocurrencies — bitcoin, ethereum and zencash.

That will require a buyer first registering online and downloading a digital crypto wallet. He or she will then have to interface with virtual exchanges, where to date petros are not available.

But to most Venezuelans the whole concept is still more pie in the sky than daily reality.

“I don’t know… No idea,” responded an amused Carolina Mendez when asked if her ice-cream parlour takes petro.

Jose Angel Alvarez, president of Venezuela’s cryptocurrency association, said he thinks the petro can find its place in the virtual currency jungle.

But he wants more transparency on how it works as well as “a breaching of the wall of disinformation”.

Taking stock of the pre-sales phase, Maduro would not let on how many petro units had been sold or at what rate.

“I don’t know where there they get these US$5 billion from,” said Oliveros.

Economist Cesar Aristimuno told AFP ahead of the launch that the pre-sale price was between US$20 and US$30, well off the US$60 the government was touting as the “reference price”.