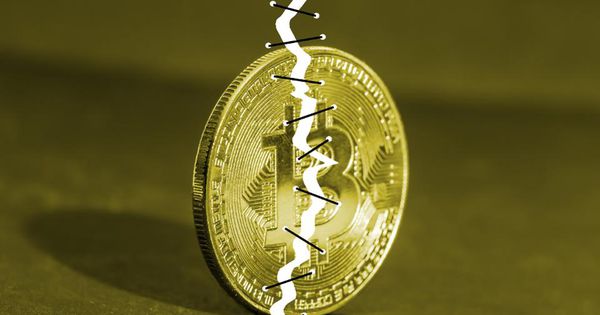 It’s not a good Friday for Bitcoin and friends. The top 10 cryptocurrencies are all in the red again.

Bitcoin is now about $70 below its lowest level of the year, reached on February 4. China is doing it no favors.

Besides the recent ad bans for initial coin offerings on every major U.S. social media platform, plus Google, the No. 2 economy and biggest fan of crypto keeps putting the screws to blockchain and bitcoin.

A blockchain funding center was recently scrapped in China. The government continues to talk about new regulations before going forward with any of this, and that has created some obstacles. These are not necessarily roadblocks, but they are definitely detours keeping Bitcoin away from $10,000.

“I think that the China news caused traders to dump Bitcoin,” says Naeem Aslam, chief market analyst with ThinkMarkets in London and a Forbes contributor.  “It further reinsured China’s negativity and reluctance in using blockchain-related products. China’s future in blockchain is a haze,” he says.

Last month, The People’s Daily called for domestic regulation before it commits to blockchain technology, the new digital ledger system that can eliminate some middlemen in transaction processes. The front page article featured an illustration of someone cooking what looks like golden bitcoins over a hot kettle dangling from three chains.  The government of China is still supposedly committed to blockchain, but is less excited about cryptocurrencies. Its ban on cryptocurrency exchanges went into effect late last year. The Bitcoin market fell, then rallied shortly after hitting a high of roughly $20,000 at one point on Dec. 15. That seems like eons ago. Bitcoin is now trading under $7,000.

Danske, Denmark’s largest bank, is also banning crypto trading despite saying it remains optimistic over blockchain, too. The ban, like the China blockchain funding center ban, led to the sell-off late this week, Aslam says.

Bitcoin is not the only crypto falling down the rabbit hole. Almost every 10 coin was down on Thursday and all of them are down on Friday. Bitcoin is down over 3% as of late morning.

In Ethereum, big changes such as rental fees are coming to that blockchain platform and issuer of the ether coin. New database architecture is creating more uncertainty and so ether is down even if a revamp of its blockchain tech is good for the long term.

Ripple, another favorite of cryptocurrency gamblers, is also down. The coin affiliated with the RippleNet blockchain is down over 2%.  Uphold, a digital payments startup with around $3 billion worth of transactions recently allowed for its members to purchase Ripple coins (XRP) without any fee. That has not moved the needle on XRP however.

“This is more fear, uncertainty and doubt,” says Serge Millman, managing partner of Starta Ventures in New York. “Bottom line seems that there is just too much supply on the market, not in Bitcoin per se, but in all coins. Who needs 1,500 utility coins? No one.” A utility coin is a type of cryptocurrency that acts as a discount to the service or product sold by the coin issuer.

The last seven days have been a bloodbath for crypto. Of the top 50 coins, only four are in the green.

There are also rumors circulating in Japan and China that one of the big and early investors in Bitcoin is trying to drive the price down to the price of Bitcoin Cash. That would take another $6,000 off of Bitcoin, as the Bitcoin Cash coin is worth just around $680. It would make it unprofitable for Bitcoin mining companies to make any money. They are the owners of computer systems that create all these new Bitcoins being made in transactions. Pushing it down that low might be impossible, but financial markets love a good conspiracy.

Cryptocurrencies can have a brighter future if it becomes more transparent; the exchanges don’t take months to sign up new users; and the startups issuing new coins are decent enough to warrant investment.

Many in the industry believe that a better rules-based system will be a positive for cryptocurrencies in general. While stricter rules designed to protect investors will definitely wipe out dozens of these coins issued via ICOs, the pioneer coins are likely to survive.

Doh! Not a good Friday for Bitcoin and friends.