Last year, the company ran 28 trips to Afghanistan, including trekking journeys into the rugged Wakhan Corridor between the Pamir Mountains and the Karakoram range, cultural visits to the cities of Kabul, Bamiyan, Mazar-i-Sharif and Herat, and the country’s first ever commercial kayaking expedition. The UK-based company also offers trips to Pakistan, India, former Soviet Central Asia, the Caucasus and – also growing in popularity with skiers – Iraq. 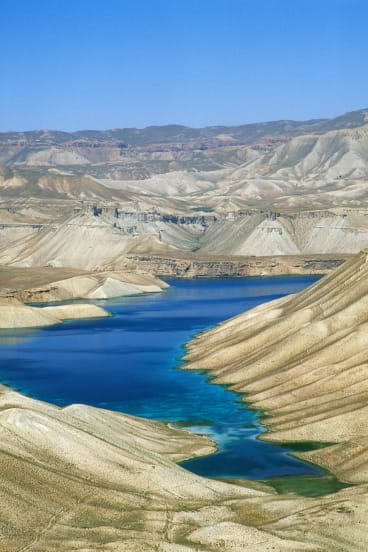 The startling hues in the lakes of Band-i-Amir, Afghanistan.

Untamed Borders isn’t the only tour operator specialising in trips to relatively inaccessible, difficult destinations such as Afghanistan; the intrepid traveller can choose between a number of UK- or US-based companies with names such as Wild Frontiers, Hinterland Travel and War Zone Tours. Hinterland Travel, founded in 1972, is the oldest; Untamed Borders, Wild Frontiers and War Zone Tours emerged after 2001, in more recent, volatile times. If their clients have anything in common, it’s an adventurousness and broad-mindedness that comes from already being well travelled.

“In our experience, travellers want to see an authentic world that has not yet been changed by mass tourism and where they will not be crowded out by selfie-stick-wielding tourists,” says Jonny Bealby, founder of Wild Frontiers. “Now, as at many points in history, this is a pivotal part of the world where so much of the planet’s critical geopolitics are played out. For the culturally interested traveller, it’s a region that simply can’t be missed.”

Why visit Afghanistan? Certainly not to feel pampered. On Earl’s trip, the guesthouse accommodation offered “only intermittent electricity”, in communal rooms kept sporadically warm with wood-fired stoves. “Whenever these ran low, a man would appear with a plastic bottle of blue methanol gel to get it started again, then nonchalantly throw the empty bottle on the fire and leave, filling the room with foul-smelling plastic fumes. Everyone would leave the room, preferring cold air to toxic smoke, so it defeated the purpose somewhat.”

Daily meals were similarly basic. “A bizarre token salad was ever-present: never more than a couple of slivers of sliced onion and a singular cherry tomato.” That said, there are melons, Willcox promises, as large as beach balls.

Driving in Afghanistan is the worst of all, involving rundown vehicles on ill-maintained roads shared with reckless motorists. “I was involved in two low-speed car accidents in the two weeks there,” says Earl, “including one where a motorbike crashed into our stationary van despite being the only vehicles on the road for hundreds of metres in either direction.”

But Afghanistan also has plenty to offer. One can just imagine the slick television commercial for Afghan Tourism, inviting you to retrace the steps of Marco Polo, Genghis Khan or Alexander the Great, explore magnificent valleys and ancient tombs, swim in the lapis lazuli waters of the lakes of Band-i-Amir. There’d be sweeping shots of the remains of the Buddhas of Bamiyan and the blue-tiled shrine of Hazrat Ali in Mazar-i-Sharif, and plenty of smiling locals: the hashish-smoking Sufis in the ancient Silk Road city of Balkh; the Pamir’s yurt-dwelling Kyrgyz, one of the world’s last nomadic people; the glassblowers and tile artists of Kabul and Herat. 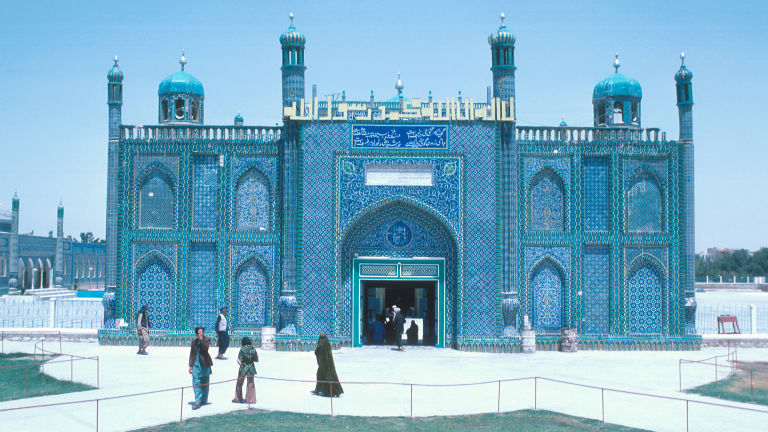 Hazrat Ali shrine in the Afghan city of Mazar-i-Sharif, also known as the Blue Mosque. “There are mosques whose architecture rivals the Taj Mahal all over the country,” says one visitor.

“Afghanistan really feels like stepping into an ancient world at times,” another Australian guest of Untamed Borders, Ben Drew, 31, tells me. He learnt Farsi, one of the country’s two official languages, before travelling. “The clothing, the religion, the interactions between people, the architecture … There are mosques whose architecture rivals the Taj Mahal all over the country.” If you’re lucky (or unlucky), you’ll witness the spectacle of the popular Afghan pastime known as “buzkashi” – horse-mounted rugby, except the “ball” is the headless carcass of a goat.

It’s not uncommon for locals to invite travellers over for a drink of tea. Foreigners provide Afghans a means of reconnecting with a world that largely regards them as war victims, while also putting money into the local economy. Travellers with Untamed Borders, for example, regularly stay at guesthouses converted from the homes of locals, just one way families are benefiting from the rise in tourism.

“They usually think we’re journalists, so sometimes there’s a look of surprise when they find out we’re tourists,” says Willcox. “For some of them, there’s definitely a feeling of pride.” 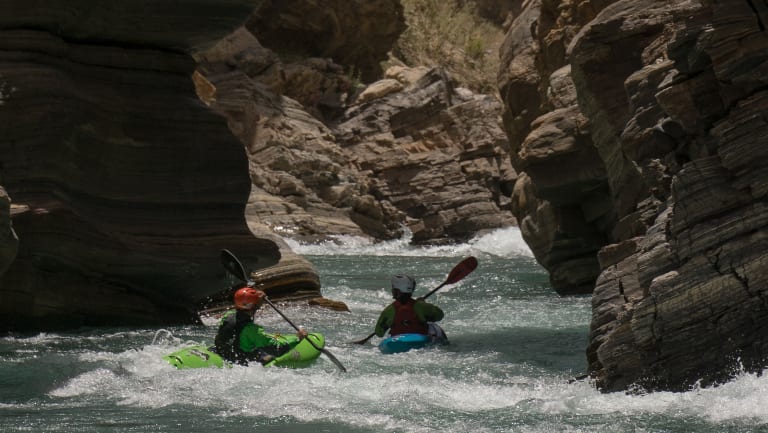 Of course, no trip is worth not getting to come back and talk about it. The situation in Afghanistan has worsened since the 2007 publication of the Lonely Planet guide, with suicide attacks and civilian deaths on the rise. The latest US government travel advisory reports “high levels of kidnappings, hostagetaking, suicide bombings, widespread military combat operations, landmines, terrorist and insurgent attacks, including attacks using vehicle-borne or other improvised explosive devices”. Terrorist groups seem to attack with little or no warning. “If you decide to travel to Afghanistan,” it suggests, “draft a will.”

In August, 2016, two Hinterland Travel minitour buses were attacked by the Taliban as they passed through the western province of Herat. The convoy, which included three armed military escort vehicles, was bombarded with a rocket-propelled grenade and small arms fire. There were no fatalities, but at least seven tourists were injured, their belongings destroyed in the resulting blaze. The trip was aborted.

In January, Taliban gunmen stormed the InterContinental Hotel in Kabul, killing at least 40 people, including 15 foreigners. In 2014 the Serena Hotel in Kabul was also attacked, leaving nine dead. Outside of military bases, the two hotels are among the most high-security buildings in the country. There have been several more incidents during the writing of this piece, including three separate suicide attacks in Kabul in March that killed at least 48.

With all this going on, some might regard inessential travelling in Afghanistan as fundamentally risky and reckless.

“Given our previous track record and subsequent record currently in the Middle East, I’d not consider anything that we did as being irresponsible,” Hinterland Travel founder Geoff Hann says of the 2016 incident, in which he suffered shrapnel wounds. “Apart from not travelling at all, I do not know what else we could have done.” In fact, Hinterland Travel has suspended travel in Afghanistan for 2018 – “I am waiting for the right moment to return,” says Hann – while Untamed Borders and Wild Frontiers’ 2018 Afghanistan trips will proceed as planned. 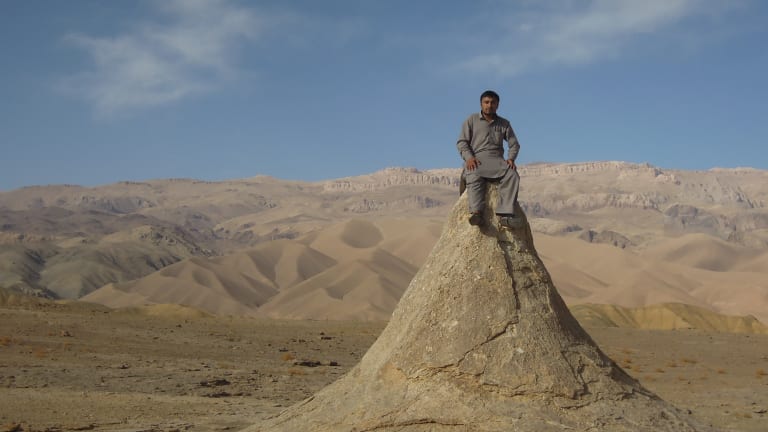 Travellers to Afghanistan “want to see an authentic world…where they will not be crowded out by selfie-stick-wielding tourists,” says one operator.

Apart from organising paperwork and permissions to bring groups to certain areas, there’s a lot to be done for a tour company endeavouring to keep up with the ever-changing safety situation in the country. Untamed Borders and Wild Frontiers make risk assessments based on up-to-date security memos compiled for development companies and journalists in the region, sourced from local security companies and others. These are far more detailed and more nuanced, Willcox says, than the “good but very general” advice for the general public supplied by governments.

Guests are briefed on safety protocols, supplied with local clothes on arrival, transported in the local vehicle of choice (a “beat-up old Toyota HiAce”, in the case of Earl’s tour group) and, as a rule, are put up in smaller, low-key accommodation rather than popular hotels. (Willcox points out that the InterContinental and Serena hotels were, and continue to be, high-profile targets.) Tour groups are generally steered away from areas with a higher presence of foreigners, including military and humanitarian aid workers – popular targets for insurgents – and larger groups are split into smaller groups in the single digits to draw less attention. There are certainly no flag-wielding tour guides or headsets. To prevent strandings, two vehicles are taken when driving, and references to tours are carefully scrubbed from the internet.

Guides are highly informed and experienced (War Zone Tours’ guides have military or security backgrounds), with backup personnel in the UK or US ready to provide assistance around the clock. The extra peace of mind comes at a cost; the price of a 12-day trip can be between $6000 and $10,000.

Even with all the prior preparation, it’s a fluid situation, Willcox says. Itineraries may need to be tweaked at a moment’s notice, routes altered, mode of transportation changed, or parts of a trip entirely aborted. “Things change,” says Willcox. “Incidents happen. You have to act accordingly. We can’t ensure safety, that’s not the way security and safety works. You look at what the risks are, you minimise those risks, and if you still feel even with those safeguards in place that you can’t get them to an acceptable level, then we don’t go to certain regions, or do certain things in certain places.”

To Earl’s mind, “being exposed to driving [in Afghanistan] seems far more dangerous than the conflict, and people never seem to question the sanity in driving”. This was technically accurate in 2017, according to United Nations figures: there were 4734 traffic-related deaths in Afghanistan, compared with 3438 civilian deaths caused by suicide bombings and ground engagements (an additional 7015 were injured). 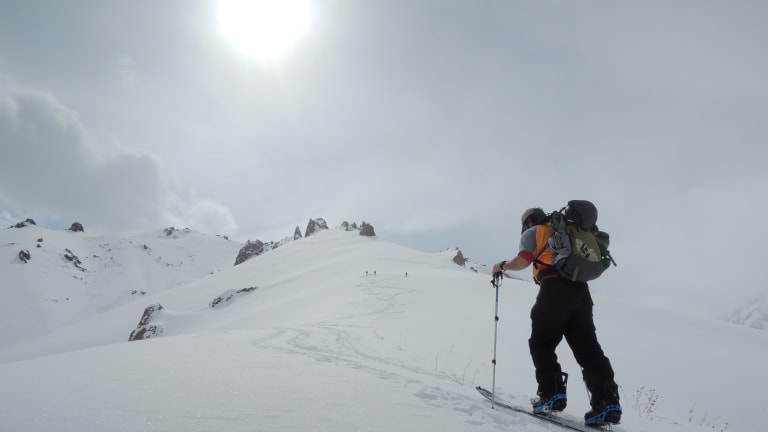 While emphasising the lengths taken to minimise risks, Willcox says that trips to Afghanistan and the like attract the kind of traveller who doesn’t mind an element of unpredictability. “If people talk about their holidays, often the stories they tell are the ones where something didn’t go quite right. Or there was a bit of drama, or something like that. Perhaps there is an appeal in going somewhere that isn’t quite as ordered as people’s daily lives tend to be. But we do strive to make things as ordered as possible. And, if there is a problem, we have the knowledge, experience and resources to solve those problems.”

Asked if he would return to Afghanistan, Earl is adamant. “Of course! Nothing went wrong, I never felt unsafe, I had a great time and I saw some amazing things. What’s not to like?” As far as skiing is concerned, the exhilaration of carving his own route through untouched snow was only enhanced by the various challenges involved. “You may have to hike for several hours to get in a single run, and the altitude makes it that much tougher, too,” he says. “But you appreciate the descent that much more.”

To read more from Good Weekend magazine, visit our page at The Sydney Morning Herald or The Age.