Smart City Project: How Pune is cycling towards sustainability 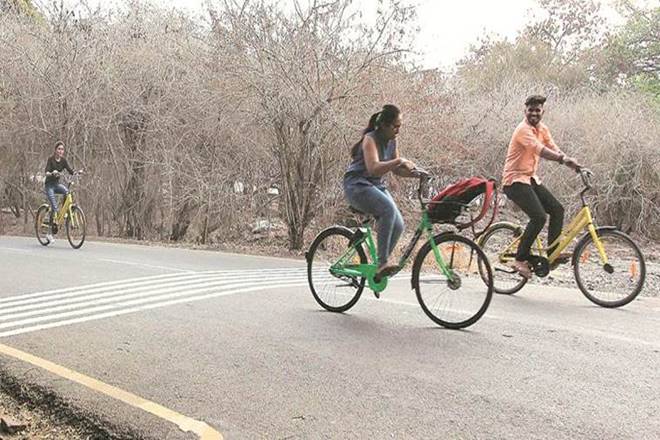 The wheel has come full circle for Pune. Once known as a bicycle city, its bicycles had been elbowed aside by motorised vehicles in recent decades, with the cheap, healthy and environment-friendly mode of transport being considered a risky proposition.

The wheel has come full circle for Pune. Once known as a bicycle city, its bicycles had been elbowed aside by motorised vehicles in recent decades, with the cheap, healthy and environment-friendly mode of transport being considered a risky proposition. That is likely to change thanks to the Public Bicycle Sharing System being implemented across the city as part of the Pune Smart City project. Spearheading the initiative are the Pune Municipal Corporation (PMC), Pune Smart City Development Corporation and environment and transport activists. With a Rs 350 crore funding provision, a comprehensive bicycle master plan has been put in place. According to the plan, PMC will be creating infrastructure and a cycling ecosystem that private operators can tap, deploying cycles and operating bicycle-sharing schemes. Dedicated cycle tracks of 470-km length are in the works, with the 73 km of existing tracks to be integrated into the cycle network. Four private players that signed MoUs for the purpose have started operations. Zoomcar PEDL, Chinese company Ofo, Yulu and start-up Mobycy have launched bicycle-sharing apps and made bicycles available for the city’s residents to hire. The response so far has been overwhelming and the companies say they are gearing up to deploy more bicycles on roads.

While Pune has made unsuccessful attempts to have bicycle lanes in the past, what has made all the difference this time is the bicycle plan and its implementation in public private partnership (PPP) mode. Says Kunal Kumar, PMC commissioner, “along with partnerships for public bicycle sharing, we are creating infrastructure which makes cycling safe and a preferred mode of mobility. As more people switch to bikes, they will help reduce traffic congestion, fuel consumption and air pollution, besides getting exercise”. For a perspective, consider that the total number of registered vehicles in the city stood at 36.27 lakh, as of March 31, 2017. M R Nirmal, VP, operations, PEDL, highlights that his company was the first mover in the field and has 1,000 cycles on Pune’s roads, with each of them logging six to seven rides a day. While they have launched the service in 11 cities, Pune has the most bicycles of all. The token pricing is intended as an introductory offer, says Nirmal. “Being an urban mobility platform, we are in this for the long haul. We would like to be available everywhere and plan to have 50,000 cycles by the end of 2018-19,” he adds. Akash Gupta, co-founder of Mobycy, says the start-up has launched 200 bikes and the number will be scaled up given that they are logging 300 rides a day. “This is a profitable business for a start-up like ours and we expect return on investment in six to seven months,” he says. ofo, the world’s first and largest station-free app based bike-sharing platform, too has launched operations. Rajarshi Sahai, director of public policy & communications, ofo, says station-free bike-sharing has come as a shot in the arm for urban transport across the world and Pune is likely to have no different an experience. “In fact, Pune’s approach to have global bicycle-sharing operators bring in the bicycles while the city builds infrastructure and parking is an example of role clarity for public and private sectors,” Sahai feels.