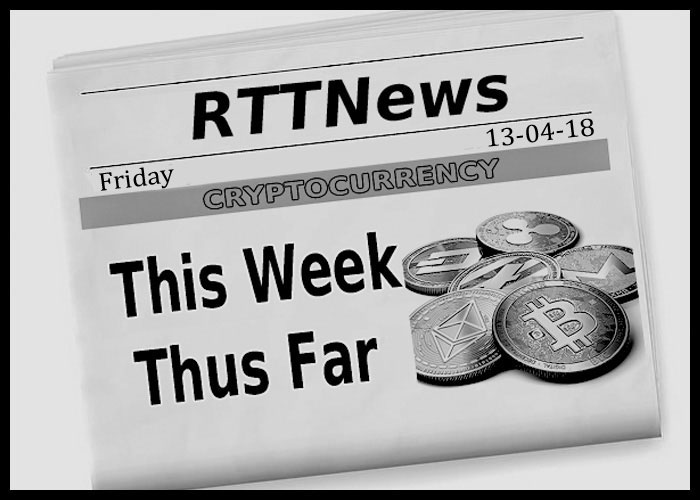 Bitcoin staged a remarkable rally on Thursday and the upward trend continued into Friday. The up-move came after the top cryptocurrency witnessed a sharp slide at the start of the week that extended into the next day. The Bitcoin price reached near $6,600 before finding support and bouncing back strongly. One of the main reasons cited for the volatility in the cryptocurrency prices was the April 17 tax filing deadline in the US. Apparently, investors sold cryptocurrencies to pay off taxes and returned later in the week, contributing to the sharp rebound. Other news that boosted sentiment included the news of two Wall Street legends exploring cryptocurrency markets and Bitcoin being declared Islamic law compliant. Geopolitical factors also played a role in driving the market sentiment.

Here is a collection of the main stories from the world of cryptocurrency and blockchain this week, thus far.

Bitcoin Above $8K After Strong Rally

Bitcoin, the top cryptocurrency, is holding above $8,000 Friday morning after it caught markets by surprise a day earlier by surging over $1,000 in less than 60 minutes to reach above that level for the first time in two weeks. The trading volume of Bitcoin also hit an hourly record of $1.2 billion on Thursday, meaning more Bitcoins changed hands in an hour than in any other 60-minutes period since cryptocurrency trading became popular in 2017.

Prominent investor George Soros, who called cryptocurrencies a bubble in January, is planning to trade the same through the Soros Fund Management, Bloomberg News reported. And, the Rockefeller family’s venture capital arm, Venrock, revealed investment in the decentralized network of video applications called the PROPS Project and a strategic relationship with an advisory-focused cryptofund, CoinFund. Voices of caution continued from the Wall Street with analysts at the Bank of America Merill Lynch, led by the chief investment strategist Michael Hartnett, warning that the Bitcoin asset price bubble is already popping. Meanwhile, a lawsuit has been filed against banking giant JPMorgan Chase & Co. for allegedly charging customers with substantially higher interest rates and extra fees for buying bitcoin and other cryptocurrencies with their credit cards. In Europe, Denmark’s Danske Bank announced that it does not wish to “support the investment environment surrounding cryptocurrencies.”

Blockchain start-up Ripple invested $25 million in ripple coins or XRP into a fund run by Blockchain Capital Parallel IV, LP., a venture capital firm focused exclusively on the blockchain technology. Meanwhile, cloud computing company Salesforce is working on a blockchain product, co-founders Marc Benioff and Parker Harris revealed in an interview to Business Insider. In China, Canaan Creative, which is among the country’s leading Bitcoin mining machine manufacturers, is planning to list its shares on an overseas stock exchange, including Hong Kong or the U.S., an executive said in an interview to Caixin.

Twitter handle @Bitcoin, which is said to promote Bitcoin Cash (BCH), was suspended and subsequently deleted, reportedly following users’ complaints. But the account was reinstated later after a lot of conspiracy theories spread. The cryptocurrency Nano and the team behind it are facing a class action lawsuit in the U.S. which alleges that the team behind the cryptocurrency violated rules and regulations while listing the coin on the troubled BitGrail exchange in Italy. Elsewhere, Texas state regulator found widespread fraud in cryptocurrency offerings during an investigation of investment offerings that were tied to virtual currencies. Indian crypto exchange Coinsecure lost 438 bitcoins worth about $3 million in what is alleged to be a hack by an insider to siphon out cryptocurrencies from the bitcoin wallet.

In India, a Special Investigation Team that is targeting black money, reported directed three top government agencies to clamp down on cryptocurrency operation and circulation in the country and trace suspected connections to shady offshore transactions. In neighboring Pakistan, the central bank asked banks not to provide services for cryptocurrency dealings. Vietnam announced a crackdown on the country’s cryptocurrency market in the wake of a multi-million-dollar fraud.

The Financial Conduct Authority of the UK said it is planning to come out with a framework for a cryptocurrency policy later in the year. The Australian Transaction Reports and Analysis Centre (AUSTRAC) framed new laws to regulate digital currency exchange or DCE providers operating in Australia in a bid to help strengthen public and consumer confidence in the cryptocurrency market. In other regulation news, Venezuela‘s National Constituent Assembly approved a Presidential Decree allowing the use of cryptocurrencies and validating its national cryptocurrency, the Petro. The South Africa Revenue Service said normal income tax rules will continue to apply to cryptocurrencies.

More than 3.5 million people in Japan are trading with cryptocurrencies, the country’s financial watchdog, the Japanese Financial Services Agency, estimated. The watchdog investigated 17 domestic virtual currency exchanges to check if they are following the government’s digital currency regulatory policy. The most popular cryptocurrencies in Japan are BTC, ETH, XRP, BCH, and LTC.

A number of top ranked U.S. business schools including Stanford, Wharton and Georgetown are reportedly adding more classes on digital currency and its underlying blockchain technology to keep up with demand from students and their potential employers. Elsewhere, the Sao Paulo-based think tank Fundacao Getulio Vargas (FGV) announced that it is are starting a Master’s degree in Crypto finance with the aim of grooming new professionals to lead the startup ecosystem in Brazil. And a new report by prominent global job site “Indeed” says there is high demand for professionals in the blockchain sector across the metro cities in India.

Crypto Tutorial: All About Cryptocurrency Exchanges

What parts of the world are seeing the best (and worst) economic performances lately? Click here to check out our Econ Scorecard and find out! See up-to-the-moment rankings for the best and worst performers in GDP, unemployment rate, inflation and much more.