Bank Of Japan Not To Issue Digital Currency 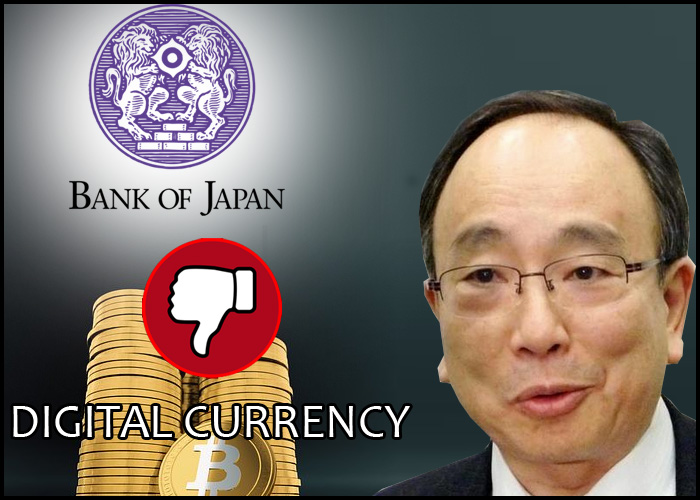 Bank of Japan (BoJ) has made it clear that it will not issue a central bank digital currency, citing financial stability concerns.

However, the Deputy Governor of Japan’s central banking authority said there is need to understand innovative technologies for its future possible application in the central bank infrastructure.

Masayoshi Amamiya was making closing remarks at a Conference on Financial Technology Innovation in Asia.

The FinTech Conference was jointly organized by the International Monetary Fund, the Financial Services Agency, and the Bank of Japan.

Issuing a digital currency directly for consumers – whether on a blockchain or not – could undermine the existing two-tiered system, according to Amamiya.

Currently central banks give access to limited entities such as private banks, which face consumers directly in a second tier. The modern two-tiered structure is the ideal process “to achieve both efficiency and stability in the currency system.”

The top BoJ official compared the issuance of central bank digital currencies for general use to allowing households and firms to directly have accounts in the central bank. This may have a large impact on the two-tiered currency system and private banks’ financial intermediation, he warned.

He called on financial authorities to make a detailed study of how high-frequency trading using algorithms and artificial intelligence could affect asset price moves and market volatility.

To tackle new challenges to the currency system, the Bank of Japan has recently been taking various initiatives in the fields of innovation and financial technology. In 2016, the Bank established its “FinTech Center.” It has also been conducting a joint research project called “Project Stella” with the European Central Bank to study the potential of distributed ledger technology. The research results were recently published.

Crypto exchanges are flourishing in Japan, where more than 3.5 million people are estimated to be trading with various cryptocurrencies.

Over the past two years, a remarkable amount of funds has flowed into virtual currency transactions, the country’s financial watchdog reported earlier this month.

Following the recent hacking of Japanese crypto exchange Coincheck, Japan’s financial regulator made a widespread crackdown on the country’s cryptocurrency exchanges to step up consumer protection.

What parts of the world are seeing the best (and worst) economic performances lately? Click here to check out our Econ Scorecard and find out! See up-to-the-moment rankings for the best and worst performers in GDP, unemployment rate, inflation and much more.