Cryptocurrency And The Diffusion Of Innovation – Main Street Crypto 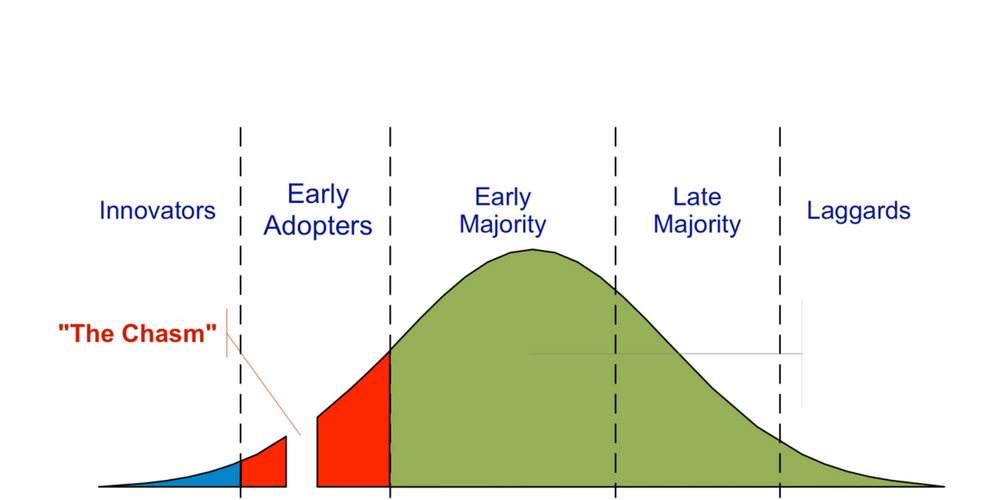 The US is $21 Trillion dollars in debt. There are those that suggest there is another $21 Trillion dollars that has been spent but is unaccounted for. It’s clear we are at a turning point, for the current system is unsustainable, along with the fact that many people are waking up to how they’re being duped.  But what stage are we in right now? Many say we are in the first part of the early adopter phase and I tend to agree. There is a scramble right now and adoption will happen but not without a period of fear, uncertainty and doubt or FUD as they say. (Comment By MainStreetCrypto)

Cryptocurrency And The Diffusion Of Innovation – Coinjournal

The growth and advancement of technology is a game of inches.  No idea springs forth fully formed, ready for adoption by the masses.  Everything builds on what came before it due to a process called the “Diffusion of Innovations” a term invented by Dr. Everett Rogers while he taught at the University of Ohio. Rogers was the first academic to research and attempt to understand how and why ideas are spread, dividing these into five categories that can be viewed via a Bell Curve.

First, you have the Innovator(s), then the Early Adopters, the Early Majority, then the Late Majority, and finally you get the Laggards.  Each of these groups plays an important role in the process and they tend to correlate with things like education, financial stability, and social class.  As always there are outliers, those who don’t seem to fit into the category they are placed in but find themselves there anyway.  For instance, Innovators came come from any social strata and may lack any formal education at all but they have an innate sense that something needs to be done and they find themselves doing it. Early Adopters tend to be educated, have financial stability, and as one would guess, come from the higher levels of society.

This is not to say that rich people are smarter than poor people, it just means that rich people are more likely to jump on gee-whiz trends like calculator watches and Google Glass.  Both of those inventions were, in a word, garbage, but they paved the way for future technological advances.  Neither got past the Early Adopter phase, but they didn’t need to. These devices, and others like them, served as proof of concept and became the building blocks for things like the Apple Watch and the Sony contact lens that can record video. They sparked the imagination and drew venture capital and Innovators who wanted to build something better.

Once you understand the actors, you then need to understand the processes by which the idea is spread out into the public consciousness. How this diffusion takes place is called Communications Channels.  There is a common joke among military communications units “You can talk *about* us, but you can’t *without* us” and like the best jokes, it is grounded in a great deal of truth.  Unless and until communications channels are firmly established ideas cannot spread and therefore cannot be adopted en masse. Parallel thinking is a real thing, and it does happen at different times in different geographical areas which is why Asia had printing presses centuries before Europe did.

And finally, we arrive at Social Systems, the place we all live in.  The society in which you are raised shapes your worldview because your embrace or rejection of the norms and mores of where you live determine your success or failure more than your birth circumstances. History is rife with examples of men and women who have risen from obscurity to positions of vast wealth, power, and acclaim and just as many tales of those who have lost those things because they refused to accept new ideas or because they embraced them.

I am going to attempt to show you how all of this relates to cryptocurrency, making it as clear as possible.

Read More: Cryptocurrency And The Diffusion Of Innovation – Coinjournal