Meet the Russians Behind Your Blockchain (And Cryptocurrency, Too) 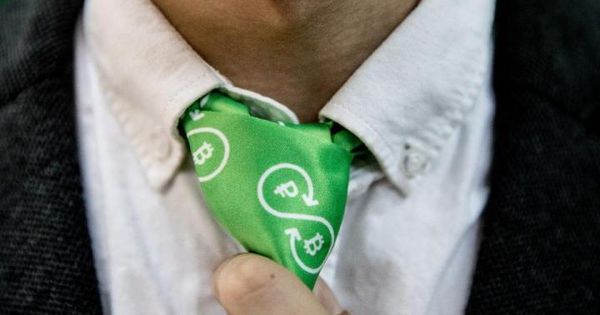 A man fixes a tie with the logo of Sbercoin, Russia’s first cryptocurrency exchange. They opened an office in Moscow this month. Sergei Bobylev/TASS (Photo by Sergei BobylevTASS via Getty Images)

In the often hard-to-understand, cryptic world of blockchain and the cryptocurrencies that depend on it, few can claim two A-listers in the industry. The Russians can.

Here are the two household names: Vitalik Buterin, the young founder of the Ethereum blockchain, enabling cryptocurrency issuing startups to flourish in a way venture capital never has. He is now a millionaire many times over.

Pavel Durov continues to make headlines. He fights the law and wins. His messaging app Telegram is currently building its own blockchain platform called the Telegram Open Network. They’ve issued around a billion dollars worth of new coins to help fund it. Durov is a rock star. He lives somewhere between Dubai and St. Kitts. He recently fought a Russian spy agency ban on Telegram. Forbes lists him as a billionaire thanks to his bets on high tech innovation. His new blockchain platform may make him a billionaire many times over.

“Whatsapp, Telegram, Google, all have Russian-Americans or expat Russians leading it or developing it,” says Igor Matsenyuk, a Russian gamer who sold his $80 million position in internet company Mail.ru back in 2010 and now runs IT-Territory, plus venture capital firm Farminers.  “If you are talking about the value of the market, of course the U.S. is bigger. But in terms of talent, I think Russia is in the top three along with China,” he says.

First a note to the newcomers: blockchain is a digital ledger. It is disruptive because it does away with the middleman. Think of buying insurance directly from an insurer instead of a broker. Think of making a call without AT&T or, in Russia, the Beeline. That’s the blockchain in a nutshell. It also helps users track every aspect of the sale, from farm to table.

Vitalik Buterin, co-founder of Ethereum, is one of the most famous Russian-born developers in the space. There are many more. (Photographer: David Paul Morris/Bloomberg)

Cryptocurrencies were developed along with blockchain. The new money, like Bitcoin and Buterin’s Ether are on every hedge fund’s radar today.

Russians are all over this space. They are in Silicon Valley on special visas, or zipping in and out of the Bay Area on tourist visas working on projects with Americans. They are in Singapore and Barcelona. They are founders and top advisors, one and all.

Russia may be known as a geopolitical hotspot thanks to another A-lister, Vladimir Putin, but it is — or better yet, can be — much more than the giant gas station Senator John McCain likes to call her. Russia always was a high tech nation. But most of Russia’s tech prowess was pure government largesse that fed the minds of Kremlin-backed physicists. They did manage to blow up an H-bomb, and get a man into space first, but the Russians were never known for putting their science, technology, engineering and math skills to practical, commercial use.

Until the blockchain craze.

As of late last year, 20% of the top 50 blockchain startups by funds raised were Russian. They were either founded solely by Russians or had Russian partners, according to angel investor Elena Masolova. Like many globetrotting Russian techies, Masolova spends a lot of her time in Silicon Valley. She is best known for selling Darberry to Groupon. She has her hands in a bit of everything. She runs a corporate training company called Eduson.TV in the Bay Area, and is an advisor to TokenStars, a cryptocurrency play that lets users sponsor certain athletes.

“The reason is simple why Russia is everywhere on this topic,” she tells me over drinks at the Hotel Ukraine in Moscow. “You have lots of engineering talent and lots of cryptography talent in Russia. Plus you have a Russian economy that is not so great, so blockchain and cryptocurrency in general just looks like an enormous opportunity to entrepreneurs there.”

Telegram founder and CEO Pavel Durov raised nearly $2 billion from accredited invested for his new blockchain project. The developer team is based in Russia. (Photo by AOP.Press/Corbis via Getty Images)

The Russians (including Russian-Americans and expats) building blockchain companies include guys like Aleksander Ivanov, founder of the Waves Platform; Vasiliy Suvorov, a senior executive at Luxoft and one of the founders behind the Crypto Valley Association being built in Switzerland; Alex Fork, CEO of fintech firm Humaniq; Alex Fedoseev, CEO of 1World Online; Siberian-turned-Australian Sergei Sergienko, the CEO of ChronoBank; Igor Barinov, the blockchain priest at POA Network in San Francisco; and Sergei Ponomarev, CEO of the Supercomputer Organized by Network Mining company, to name a few.

According to the Unified State Register of Legal Entities in Russia, there were 50 companies registered as blockchain technology firms at the start of the year. Their values range from zero to one billion rubles.

New comers are sprouting up all the time. Some stay close to home. Others think globally.

Yuriy Mukhin, is the chief executive of Glass Cube and CEO of a new insurance blockchain start up in Russia. They’re one of nearly 50 new blockchain-related companies that have launched in the country over the last year.

Here’s another: Sergei Chekriy and his partner Yury Mukhin are two Russian entrepreneurs behind I-chain, an open sourced blockchain platform for the $4+ trillion global insurance market. “We aim to build a global platform that will make insurance more fair and affordable, will allow customers worldwide to get insurance products at least at a 30-40% lower price by using blockchain, AI and big data,” says Mukhin, the company’s CEO.  “New technologies will drastically change the insurance industry.”

The company launched in early 2017 with $4 million in seed funding from Pavel Pribylov. The I-chain prototype is in its testing phase. It is scheduled to be released in May to the public.

They call I-chain ‘the Uber of insurance’ because it connects insurers and related businesses with customers. Insurance companies can develop and sell insurance products on the platform. I-Chain gives its partners a software mix of insurance company needs like know-your-customer, AI-based risk management, claims processing , among others. The idea is to use blockchain to give insurance companies a chance to lower the costs that are normally spent on development and maintenance of in-house software.

“Consumers will be able to buy insurance products from the platform through a website, or social networks, or mobile apps and messengers,” Murkin says, adding that insurance industry service providers will be able to provide their services to insurers on the  platform, like a call center for example. The platform has an internal marketplace, similar to the AppStore.

“All transactions and insurance deals will be registered in  the blockchain,” says Sergei Chekriy, the IT-architect behind the platform. “It’s about ensuring maximum transparency, reduce the costs of preventing fraud, and simplifying the reporting to regulators,” he says. Their blockchain platform is free for partners and consumers, but makes money by charging a 0.5% transactions fee for maintenance and development.

Getting inside the minds of these companies is not any easier in English than in Russian. Investors today are looking at these startups the way a traditional venture capital investor does. They want the big picture. They want to understand the technology, and the management team, regardless of where they are based. They want to understand the advantage of one company over another, and that requires deep dives, and often leaps of faith in untried tech and markets.

In this sense, Glass Cube’s i-Chain is competing worldwide for attention in a fintech segment already looking closely at blockchain to cut costs.

“Russia might be overlooked for many reasons, like political and economic isolation, but the combination of an extremely enthusiastic community and a supportive government might position them to be a serious challenger in the blockchain industry,” says Robert Wiecko, COO of Dash Core Group, the developers behind the cryptocurrency Dash.. (Shutterstock)

“Our thinking is to create a blockchain platform to serve insurance companies and customers anywhere they may be,” says Mukhin. “We plan to acquire insurance licenses in our key markets globally and provide the opportunity to new insurance businesses to work under those licenses and compete, driving prices down for consumers. It’s a clear win-win situation: the clients will get products cheaper, the insurers will cut their costs and the market will grow,” he hopes.

Glass Cube aims to raise up to $200 million from investors through a mix of venture funding and crowdfunding. The funds will be usesd to launch a full-fledged version of the i-chain to scale, conduct a global marketing campaign, and establish partnerships with insurance companies worldwide.  They also plan to issue a utility token in the weeks ahead. One utility token allows holders of it to serve 1,000 customers on the i-chain.  Ten tokens – 10,000 customers.

Like their American counterparts, Russian startups believe they are onto the next best thing. They all believe their project is “the one” that will change a market or an industry.

But global-minded early-entry firms need to be able to scale to compete.

“Through the internet, every customer is reachable,” says Ruslan Tugushev, CEO of Storiqa, a Russian blockchain platform primarily for consumer goods retail. They have 55,000 investors and raised over $25 million in their coin sale in three months. “We will scale worldwide only after creating the perfect business processes here. A larger market requires well-elaborated systems.”

The Russian government is only marginally friendly towards this technology. That’s changing slowly. Russia recently allowed for a cryptocurrency exchange to open in Moscow. In public speeches, Putin talks about disruptive technologies and has met with Buterin to discuss blockchain.

But with U.S.-Russia relations on shaky ground, the Russians behind your blockchain are worried they will be cut out, ostracized by their peers. Startups also have a hard time finding foreign investors, and foreign clients.

“We have to face the reality of sanctions and what that means in terms of opportunities available for the Russian-based companies,” says Igor Podzigun, head of international business development for the three-year-old blockchain solutions company Apla. “We won’t make it if there is a new Iron Curtain,” he says.

Russian tech companies are not sanctioned. So far there is no Iron Curtain.

Russians are behind some of the most successful blockchain platforms in the world. The Russians also dominate the cryptocurrency mining space. Go to a blockchain conference, and there are sure to be Russian miners dominating the exhibition hall.

“Russia might be overlooked for many reasons, like political and economic isolation, but the combination of an extremely enthusiastic community and a supportive government might position them to be a serious challenger in the blockchain industry,” says Robert Wiecko, COO of Dash Core Group, the developers behind the cryptocurrency Dash.

“For me, investments are made first of all into the people behind the idea, rather than just the idea,” he says. “Trust in management is key. I know Yuri and Sergei. I trust them. And they have good tech, too.”