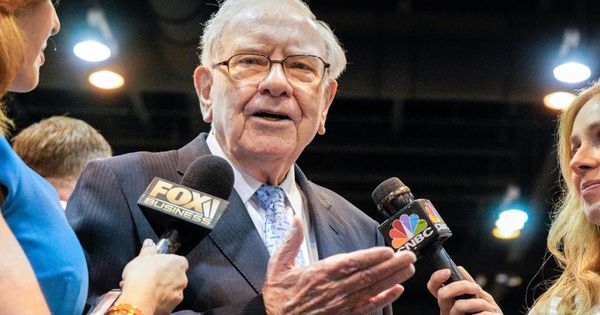 Warren Buffett, Chairman and CEO of Berkshire Hathaway, speaks to reporters during a tour of the exhibit floor at the CenturyLink Center in Omaha, Neb., Saturday, May 5, 2018, where Berkshire brands display their products and services. Tens of thousands of Berkshire Hathaway shareholders have arrived in Omaha for the annual shareholders meeting, where Buffett and his Vice-Chairman Charlie Munger preside over a Q&A session. (AP Photo/Nati Harnik)

Today, at the 2018 Berkshire Hathaway Annual Meeting, Warren Buffett and his partner, Charlie Munger, shared their continuing faith in the U.S. stock market, as well as reasons for pessimism on other assets such as crypto-currencies, bonds and gold. They discussed how their investment strategy has evolved. They are now happy owning more capital intensive businesses, such as railroads and utilities. In a more colorful moment, Munger described trading crypto-currencies as, “trading turds”.

Buffett opened the meeting by using a historical example to stress his belief in the long-term benefit of owning stocks. He shared a series of historic, and bleak, New York Times headlines from 1942. At that point, many believed that Japan would invade the Philippines, and then perhaps Australia, leading to potential dire consequences for the United States. Of course, that didn’t come to pass, and stocks were a good investment at that time.

March 1942 was when Buffett made his first stock investment at age 11. His point was not that 1942 was an especially good time to invest, but that long-term investment in U.S. stocks has historically been a great strategy for investors. In fact, a $10,000 investment made then would be worth $51 today. That record is hard for other investments to beat. For example, Buffett stressed that 300 ounces of gold bought in 1942, would still be 300 ounces of gold today.

On the other hand, a successful stock investment can generate profits that can be reinvested. So whereas a company may have had a single factory or brand in 1942, now they may have many many more, whereas 300 ounces gold would still be 300 ounces of gold. He believes that gold owned since the time of Christ has returned far less than 1% a year over a long period of time.

He is also negative on crypto-currencies following broadly similar logic. Ultimately, in Buffett’s view, the way to make money in a non-productive asset, is to sell it for someone else for more than you paid for it, which can be risky and hard to predict. Yet, with productive assets, such as a farm, you can hold the asset and make money. Charlie Munger was more negative on crypto investing, he described the situation as, “somebody else is trading turds, and you decide you can’t be left out”.

Buffett also reminded the audience that GDP per person has increased six-fold over his lifetime. Warren Buffett has lived under 14 different Presidents including the Cuban missile crisis and “war in the streets” in the 1960s as well as a Presidential assassination and a resignation. He’s amazed at the gains the U.S. has made over time and strongly believes the U.S. “really, really works”.

Of course, in 1942 owning the overall market was hard to implement for the smaller investor, and involved significant costs in trading commissions and fees. Today’s many low cost ETFs are able to track the broad U.S. stock market at some of the lowest costs in history. For example, the iShares Core S&P Total U.S. Stock Market ETF currently costs 0.03% a year, or $3 for every $10,000 invested.

Though not talking to it directly, both Buffett and Munger did allude to high valuations currently. Buffett talked about how private market prices for acquisitions are generally high. In the context of currently low bond yields, Munger mentioned how low bond yields have pushed up asset prices, especially for levered buy-outs. Ultimately, though Buffett’s theme is long-term investing, rather than trying to call any particular market cycle. He mentioned that his father-in-law had always found a reason to be pessimistic over recent decades, yet stock investments have continued to rise in value.

Buffett continues to believe in strong management, with the right incentives, and business with moats. Ultimately, they want to buy better companies rather than cheap companies. For example, when questioned about Wells Fargo, a large holding that has experienced penalties for its conduct recently, he chalks a lot of those problems as being the result of the wrong incentives for employees. He mentioned that when managing Berkshire he knew that a few employees would inevitably made mistakes, but the key thing was to make sure that employees weren’t incentivized to do bad things.

Equally, when asked about his investment in Duracell, he praised the companies brand as being a critical asset to the business. He also talked about his experiences buying American Express and GEICO in the past, at times when they were temporarily troubled. Charlie Munger discussed buying Costco at 13x to 14x earnings, and how it made sense based on how the business is managed and its property assets, and that he didn’t run any specific model or formula to inform the purchase. Buffett added how Costco “surprise and delight their customers”. Buffett also discussed Apple, which Berkshire owns around 5% of, where he described the value as a wonderful, special product backed by a very broad ecosystem.

Buffet also looks for business that required limited capital whether See’s Candy, American Express or Coca-Cola, which are all long-term Berkshire holdings. However, he mentioned that he now has invested in more capital intensive businesses such as railroads, airlines and utilities, because they now have far more money to put to work and the returns are attractive.

He described these capital intensive business as “second best” and Munger called them “good enough”. At various points during the meeting Buffett mentioned that its much easier to find opportunities for a billion dollars than tens or hundreds of billions of dollars. Having to manage a much greater sum of money, has necessarily changed his investment approach over time. Berkshire are also looking to keep their holdings of public companies below 10%, which further compounds their issues as a very large investor.

Buffett also reminded the audience that he wanted to see his investments decline in value, so that he could buy more of them for the long-term.