Just as stocks are untradable without an exchange, the same is true for Bitcoin and other digital currencies. That has made crypto exchanges a crucial — and sometimes problematic — element of the rapidly emerging world of digital currencies. On the surface, they look a lot like stock markets, matching buyers with sellers and publishing prices. Yet in many ways they differ vastly, potentially exposing investors to risks they may not fully appreciate. That’s worrying regulators and prompting new exchanges to come up with ways to mitigate the dangers.

1. How do cryptocurrency and stock exchanges compare?

They share a key function, as places to trade assets, but the similarity ends there. Crypto exchanges both hold an investor’s assets and charge brokerage commissions, functions that are normally segregated in the world of stocks. That helps to make many exchanges highly lucrative, as do the fact the fees they charge are fatter than traditional bourses’. For example, Japan’s second-biggest crypto venue, Coincheck Inc., was almost as profitable in 2017 as Japan Exchange Group, operator of the nation’s biggest stocks and derivatives markets. Another crucial difference: While stock markets are tightly regulated, their digital-asset counterparts so far have very little, if any, supervision in most jurisdictions.

2. What risks do these differences pose for investors?

Put simply, the protections seen in the stock-trading world don’t exist for cryptocurrencies. The biggest potential danger for an investor is losing an entire investment, whether through theft by hackers from the exchange holding the assets or by the bourse going out of business. Among the most recent cyberthefts, Coincheck had nearly $500 million in digital tokens stolen in January. Half a dozen or more of the largest exchanges have failed since mid-2014, some following a hack (including Mt. Gox, once the world’s No. 1 exchange), others after being shut down by the authorities. CoinMarketCap listed 217 major crypto exchanges as of May 3.

Top 10 cryptocurrency exchanges account for about half of trading volume 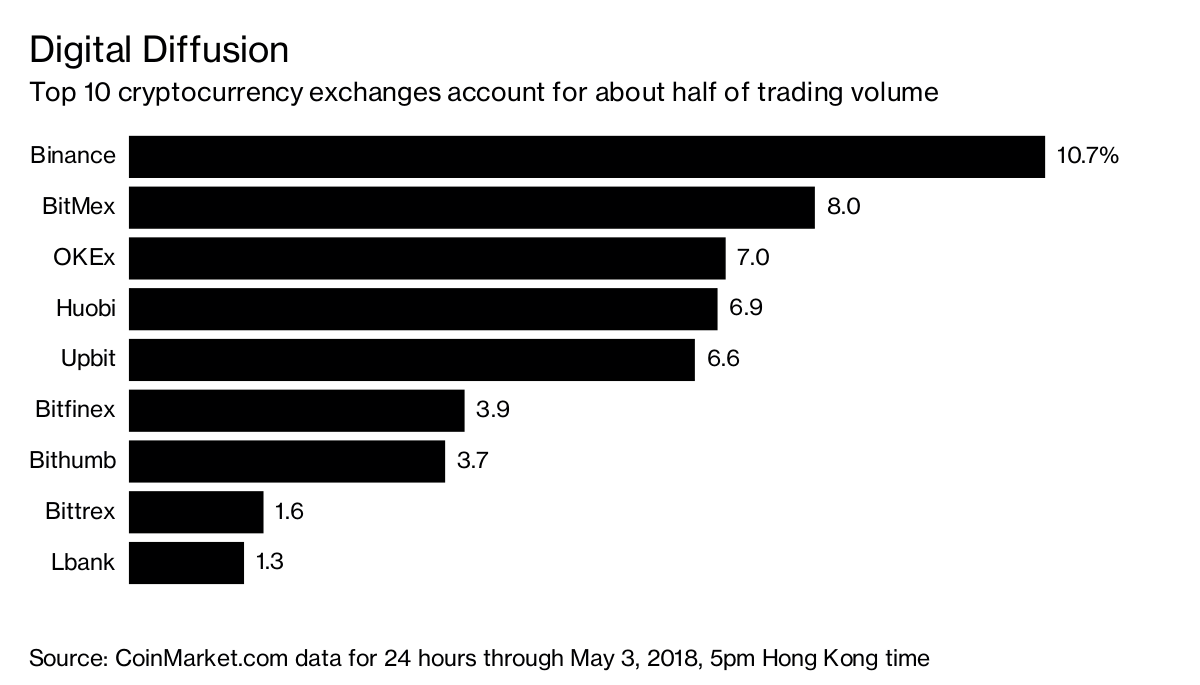 3. How can investors protect themselves?

They can keep digital tokens away from exchanges and store them offline, in what’s known as cold storage. However, in reality, they don’t tend to. It’s impractical for frequent traders, who will spread their holdings across several exchanges, according to Henri Arslanian, financial and regulation technology head at PricewaterhouseCoopers LLC in Hong Kong. Some platforms are trying to raise standards: Gemini Trust Co., hired Nasdaq Inc. to monitor for potentially abusive trading in Bitcoin and Ether.

4. What about government oversight?

Authorities around the world are only slowly waking up to the opportunities and dangers of crypto trading, and their responses have been mixed. While Japan introduced a licensing system for digital-asset exchanges last year, China, once the global center of crypto activity, is now undertaking the most strident crackdown. The tiny Mediterranean island state of Malta is compiling a framework to regulate the sector in a bid to establish itself as a hub for cryptocurrencies.

5. Are regulators doing anything to protect investors?

There have been widespread and repeated warnings to investors, particularly about volatile prices and the risk of losing everything. Many regulators have also warned exchanges not to list tokens that would be considered securities under local law. Bank of England governor Mark Carney said in March it was time to end cryptocurrency “anarchy” and hold the industry to the same standards as the rest of the financial system. In April, New York State Attorney General Eric Schneiderman wrote to 13 exchanges seeking information about their internal controls and how they protect customers. The head of the Kraken bourse, Jesse Powell, slammed his efforts and said that licensing, regulation and market manipulation didn’t matter to most crypto traders.

6. How are exchanges responding?

By fundamentally changing. A new generation is emerging, one that hues more closely to blockchain’s original libertarian ideals and that also threatens to overhaul crypto markets. Known as decentralized cryptocurrency exchanges, these new venues don’t hold client assets and do little more than put buyers and sellers together, leaving the actual transaction to the investors. The system is essentially a peer-to-peer platform and will be more transparent in operations and fees than the current exchange model, according to one of its proponents, Kelvin Wong, head of communications at OAX Foundation, a Hong Kong-based decentralized exchange developer.

7. Do these represent the future of crypto trading?

That depends who you ask. Sam Tabar, strategist at AirSwap, which opened a decentralized venue in April, predicts that traders migrating to the new model will be this year’s big crypto story. But others such as Chia Hock Lai, president of the Singapore Fintech Association, say the new types of bourse have their own particular issues, such as an inferior user experience and lower levels of technical support. For David Lee, author of the Handbook of Digital Currency, decentralized venues will in five to 10 years become the main avenue for trading cryptocurrencies.