Huobi.Pro, the world’s third largest digital asset exchange, will host Blockchain Festival 2018 in Ho Chi Minh City from May 24-25. It has just announced the agenda and the speakers confirmed for the event. 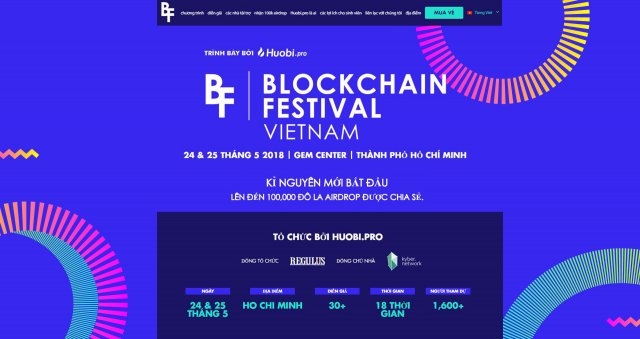 The world’s leading blockchain asset financial services provider will host the first Blockchain Festival in Vietnam from May 24-25.

The two-day Blockchain Festival, the first of its kind in Vietnam, will feature more than 30 speakers, including keynotes from Mr. Le Ngoc Giang, Ministry of Justice of Vietnam with The Road Ahead for Vietnam’s Blockchain Industry, and Dr. David Nguyen, President of Vietnam Chamber of Commerce Singapore and Chairman of Regulus Investment & Capital Holdings.

“Vietnam is becoming more and more important on the global blockchain map,” said Dr. David Nguyen. “As such, Vietnam needs more help from global leaders in the blockchain industry, like Huobi. We are grateful to Huobi for organizing Blockchain Festival Vietnam, as it represents an important milestone for Vietnam’s blockchain development. We hope that this festival will help increase the awareness level of the public, especially for ICT businesses, students, and universities.”

Fueled by a young population with a high rate of smartphone usage and large batches of IT graduates each year, Vietnam has become one of the fastest growing economies. In Southeast Asia, Vietnam has been dubbed “the blockchain country to watch” because of the country’s high-tech literacy and engineering resources. According to the World Economic Forum, Vietnam is ranked among the top 10 countries for producing engineering talent.

“Huobi organized the Blockchain Festival in Vietnam to bring industry knowledge, insight, and experts to one of the fastest growing markets in the blockchain and crypto landscape,” said Ms. Wu Xing, Senior Director of Huobi.Pro. “There has been a surge in demand from the Vietnamese market and we hope that by opening up new opportunities here, we can have a positive impact on both the local economy and ecosystem.”