A former McKinsey & Company consultant has been found at the heart of an internet prank that enraged thousands of people worldwide. An apparent Initial Coin Offering ‘scam’ saw Dr. Yassin Hankir allegedly make off with millions in investors’ funds with his company Savedroid. While Hankir has since stated he had investors best interests at heart by raising awareness of online crimes, his stunt seems to have struck a nerve with a number of ICO investors.

An initial coin offering (ICO) is a means of crowdfunding centred around cryptocurrency, which can be a source of capital for start-up companies. In an ICO, some quantity of the crowdfunded cryptocurrency is pre-allocated to investors in the form of “tokens,” in exchange for legal tender or other cryptocurrencies such as Bitcoin or Ethereum. These tokens become functional units of currency if or when the ICO’s funding goal is met and the project launches. While some have touted the technique as the way of the future, though, others have been swift to condemn it as a hive of criminality.

After investors offered up some $50 million to support Savedroid’s purported mission to build an AI app for crypto saving and investing, along with a credit card, the firm looked to have embodied the latter, as staff seemingly vanished off the face of the earth. People began to suspect the worst, following a series of photographs showed an empty office, before former Frankfurt-based McKinsey & Company Engagement Manager Dr. Yassin Hankir waded into the debate with an apparent audition for the internet’s smuggest prankster. Hankir posted two photographs and a not-so-cryptic farewell message to his Twitter feed, as he apparently reveled on an Egyptian beach at the cost of his investors. 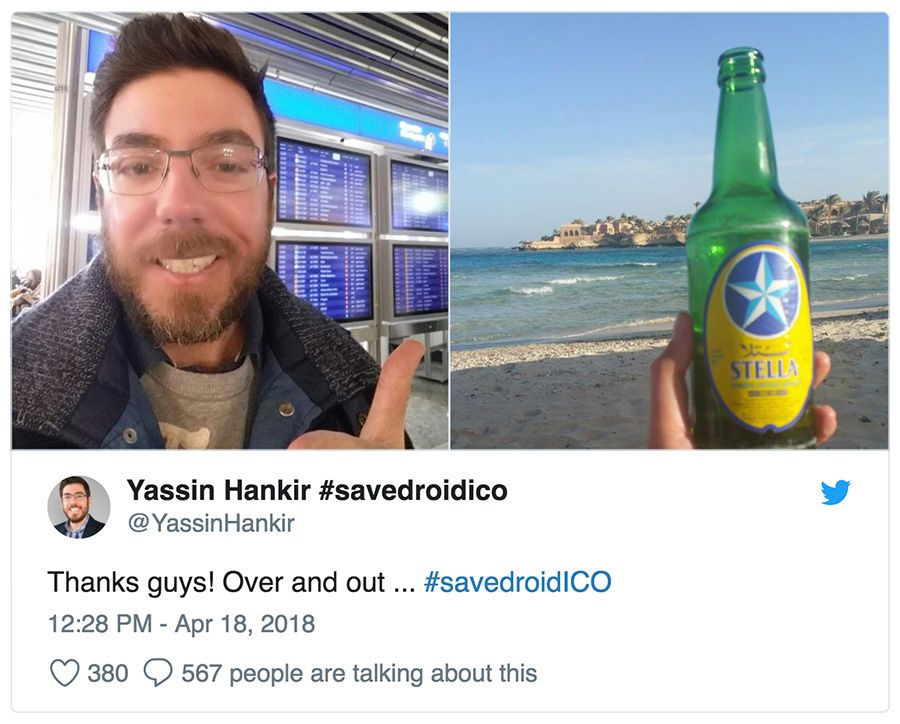 After several hours of panic, outrage, and a concerted effort by web-users “TO HELP FIND THIS ******”, however, Hankir and Savedroid both emerged from the shadows to confirm that the worst had in fact not occurred. Instead, a banner reading “AND IT’S NOT GONE” appeared on the Savedroid website – referring a popular joke from South Park satirising the gambling of bankers – before CEO Hankir himself appeared in a video, very much still in Europe, to explain what he had hoped to achieve with the stunt.

He elaborated that he wanted to draw attention to the cheating problems of the ICO scene, adding, “Even we as a highly regulated startup could have just run away with the money.”

While Hankir may have had honourable intentions, however, his methodology did little to endear him to those who consider themselves the ‘ICO community’. Upon discovering they too had fallen victim to the stunt, one of the crypocurrency world’s many mouthpieces, Crypto Briefing, later raged, “When you take $50 million in funds that are raised by investors who believe in your project, you don’t then pretend to disappear with that money… Yassin Hassir may consider himself a genius for drawing the eyes of millions to his stunt. But to his investors, he caused them anxiety, pain, and distress.”

The ICO market has drawn enthusiasm and stark warnings in equal measures over the past 12 months. While the scene has boomed, the success of the up-and-coming fundraising technique has seen a horde of inexperienced investors flood the market. These investors are primarily fuelled by the infamous condition of FOMO (or “fear of missing out”), making for impulsive collective investments which have made the market as a whole notoriously volatile.

While many legitimate sources also use ICOs, many projects are often guilty of trying, with questionable ethical intent, to attract investors to help “introduce Blockchain in new markets” via white papers containing clichés aimed at attracting inexperienced investors. These investors often have no reasonable justification for Blockchain use, besides jumping on a bandwagon, and are easily influenced by buzzwords.

The most commonly used of these, according to EY, include; meaningless platitudes including “next-generation platform”, or, “First project to unlock multibillion market of < … >”; ploys to manipulate those inclined to believe conspiracy theories like, “No corrupted central authority”; and appeals to socially alienated individuals such as, “We are creating a community/ecosystem/economy”. According to a recent study by Big Four consultancy EY, these investors are also particularly vulnerable to criminality, estimating that of the nearly $4 billion raised since mid-2015 via this financing method, as much as 10% – or $1.5 million a month – of issued tokens end up in the hands of hackers. ontribute to the volatility of post-ICO trading, as large sums are invested into projects which, were they to perform a fundamental valuation, they would see are likely to fail.

These tactics can be used by criminals to make huge sums of money in little to no time at all – something which Hankir’s prank aimed to raise awareness of. Notoriously one of the largest ICO scams to date, Vietnam-based Modern Tech used supposed ‘iFan’ and ‘Pincoin’ offerings ICOs to divest its victims of an estimated $658 million, while digital currency OneCoin was accused by Indian authorities running a Ponzi scheme and collecting about $11.4 million from unsuspecting investors. Elsewhere, BitConnect saw its allegedly criminal activities nipped in the bud at $750,000, when investors filed a class action suit against the company on suspicion it was likewise running a Ponzi scheme. The company has since closed its operations.