‘There’s nothing wrong with me, I just experience the world differently from most people’ 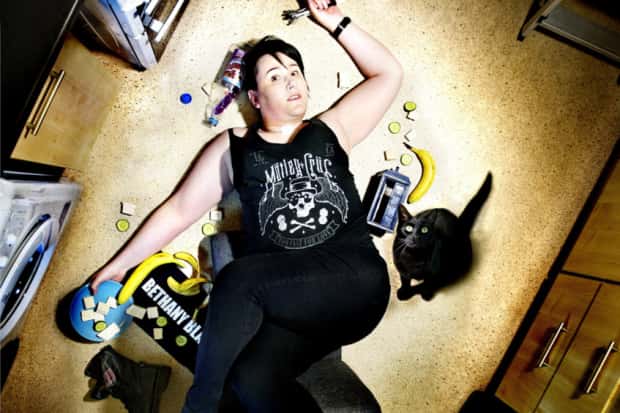 I recently discovered I’m on the autism spectrum. Actually, I’ve known for over a decade, but it was late last year I was finally diagnosed with autism. Shortly after, I discovered I also had ADHD.

That was more difficult to figure out, as my sister kept saying “You’ve definitely got ADHD,” and I didn’t believe her because she likes diagnosing things. Anyway, she sent me the list of symptoms and I lost it. Then I got a second one and never read it. Then my inability to remember to do things – like lock doors, take towels into showers, turn ovens off and the like – became too much for my partner and she told me to get tested for pre-senile dementia. Whilst I was trying to remember to book an appointment I looked at the symptoms list and there were 21 diagnostic criteria, so basically, I couldn’t be bothered reading that.

I always thought I was a hypochondriac and over the last few years I found out I’ve actually got a lot of things wrong with me. It messed with my self-perception, I’ve always thought I’m a just loveable screw-up, but it turns out I’m a terrible burden.

I’ve struggled with depression ever since I was about seven. I knew that I was trans and realised that it meant the world wasn’t intended to be for the likes of me, that even if I was to be out and happy in myself then the world wouldn’t accept me.

By the time I was 20, trying to live with it as a secret had taken its toll and left me suicidal and, sidebar, taking a lot of drugs and drinking booze like it was a full-time career.

When you’ve had to cope with a condition your whole life it becomes so normalised it’s only when you talk to other people who’ve never experienced it that you realise how weird it is. It was after my fiancée dumped me at the age of 32 where everything fell apart over the space of about a year. I broke my leg, got ME, put on seven stone from not being able to walk for a year and our house got broken into the week before Christmas. On top of all of that, I had six friends and one kitten die. It was quite the year.

Broken, I went to the doctor and she leapt into action. She immediately put me on an eight-month waiting list to see a therapist, so all I had to do in the meantime was not kill myself. By this point I’d had 36 years of practice at that, so the last eight months were easy. My first session went so well I was convinced that within six months I would be, if anything, too mentally healthy.

On my third meeting with her she said, “Let’s talk more about your agoraphobia”. That came as a shock. “I’m not agoraphobic,” I said. Clearly not agoraphobic. That’s Sigourney Weaver in Copycat who never goes out or only communicates with others on the internet; or Matthew in Game On, a complete fantasist and… Oh my God, I’m agoraphobic.

But how could I be agoraphobic? I was at my therapist’s office, wasn’t I? I was out and about.

Turns out this was like OCD, and not like the version you see in films. My OCD unfortunately doesn’t manifest in a clean and ordered house, it mostly involves intrusive thoughts telling me I either have, or want to, hurt people I care about. So, for me agoraphobia means not going out except for work, and then going straight from my house to my car to the green room to the stage back to my car and then home again.

I find people terrifying. Crowds especially. Public transport is an absolute no go. Ever. I get panic attacks when groups of men get on, especially if they’re drinking and loud. As a result, I’ve not got a train or bus in years.

People always like to ask, “So why is that?” Like that’s ever going to be the story that gets the party started. Like there’s going to be an answer that goes, “well I was on a bus once and it filled up with rabbits and they all wanted a cuddle, and I realised then that I would never have a public transport journey as good as that again and can’t bring myself to try.”

Nope, the answer, “I got beaten up on a lot of trains and buses as a teenager,” as an explanation ruins any further conversation about it. So, I was referred for psychotherapy, where they said these responses are technically PTSD and I got discharged to look after my own mental health with a handful of Prozac and beta blockers and the phone number of the emergency psychiatric ward if it all gets too much whilst I sit on the two-year waiting list. Yay for mental health provision in the UK!

I told my therapist I think I might be on the autism spectrum and I finally got an assessment. I went with my sister as they needed someone who knew me when I was a kid (my parents now live in France), and over the three hours of testing I got asked a lot of questions about how I deal with things. It becomes clear that so many of the things I thought were just “comedian” traits match the diagnostic criteria for autism.

The broadcasting rather than listening? Being afraid of being in crowds but being OK with being on a stage and awkwardness in conversations, (and honey, you haven’t seen awkward until you’ve seen two comedians who’ve never met before trying to have a conversation – it’s like watching one of those Japanese games Expos where they’re showing off their latest AI as it awkwardly tries to interact)? Autism.

So why didn’t they spot it earlier? Because, women are better at masking autistic traits. Skills society teaches women are desirable; being quiet, reserved, taking a back seat in group conversations? They are all traits of autism. That forming close bonds with animals over humans? That’s an autism trait.

Suddenly it explained so much about who I am and why I am how I am. The relief was extraordinary.

But at the same time there was grief. That there was “something wrong with me”, as I felt it at the time, and that no matter how hard I tried to improve there were things I’d not be able to do. There was a guilt about it too, my OCD kicked in saying “maybe you’re just pretending so that you’ve got an excuse for every time you don’t want to do something”. The in-depth questions brought up a load of issues for me that I’d never even considered. It explained why I drank to be able to socialise. It also explained why I now find it hard to make friends. It also made me sad that no one  had spotted it earlier and all  the lost opportunities I’ve missed because I’d not had the support I needed to be able to take advantage of them all. In the end though it’s been the best thing that’s happened for me. There’s nothing wrong with me, I just experience the world differently from most people. It’s not exactly a super power (although my father-in-law did ask me how many Lego bricks were in his son’s room after I’d been in there) but by the same token it’s not something I feel I should hide away.

Oh yeah, and I finally read that ADHD list, I’m sure you can guess how that went? Suffice to say I was in tears of relief by the 21st symptom in a row that I had.