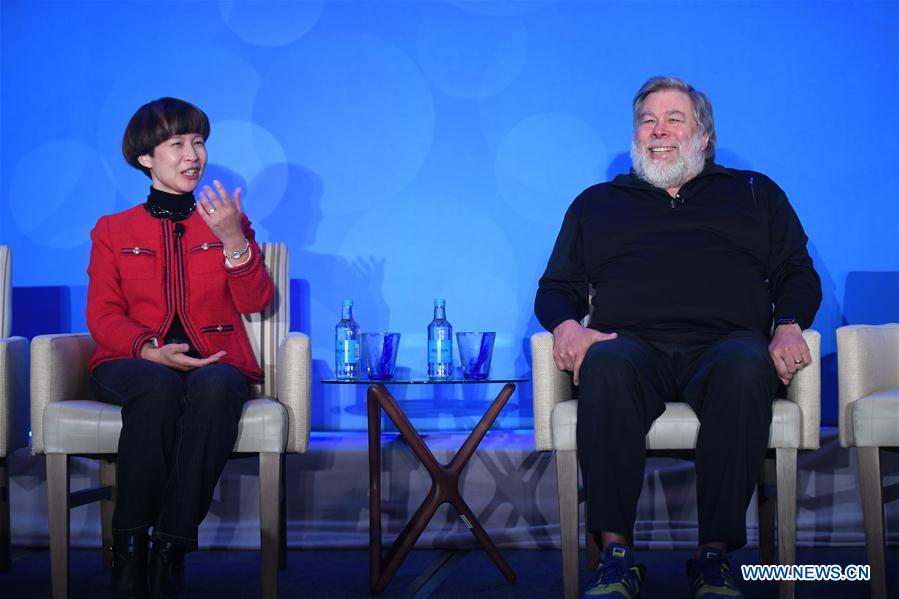 HALF MOON BAY, the United States, June 29 (Xinhua) — With the development of artificial intelligence (AI), the need for open exchange and collaboration on global AI strategy is growing, especially between the United States and China, said tech company heads and experts at an AI tech meeting here on Friday.

“I think it’s much better to talk and communicate and share and get more done than I’m gonna just stay narrow and compete, and keep what we have from them,” Apple Co-Founder Steve Wozniak told Xinhua at the first U.S.-China AI Tech Summit held in Silicon Vally.

The gathering on the development of AI technology saw heated discussions on the relationship between the United States and China on the major challenges ahead with the acceleration of AI adoption across various industries.

The summit traces its origin to a meeting of Helen Liang, managing partner of an early stage venture capital firm FoundersX Ventures, and Cyrus Hodes, advisor to the minister of artificial intelligence of United Arab Emirates, who shared the same shuttle leaving the Wuzhen Summit held in China in December 2017.

Like other experts, they were marveled at the pace of AI acceleration across industries on display at Wuzhen, and similarly at the transformative innovation coming out of the U.S. tech communities.

Liang and Hodes then created the AI Alliance of Silicon Valley, a nonprofit organization aimed at bringing together top executives, policymakers, and technologists in the AI field to discuss issues openly.

“We agreed there is a clear disconnection between U.S. and China on the implications of broad AI deployment, even as they both race forward in developing the technology,” Liang told Xinhua.

“I think there are significant misunderstandings. One of the misunderstandings that I felt was that the media has been portraying it is a new superpower race, U.S. or China,” Kay Firth-Butterfield, the World Economic Forum’s Head of Artificial Intelligence and Machine Learning, told Xinhua at the meeting.

The misunderstanding “is growing in a way that could be worse,” said Nicolas Miailhe, co-founder and president of The Future Society.

“The tension right now between the White House and certain countries, including China, proves how high (the) stake AI is,” Miailhe said.

“Competition is good, but because of the velocity of the rise of AI, we need to collaborate,” he said.

“If governments jump-start regulation and governance without a good understanding of how business models and tech are changing the world, the room for mistake and for wasting value is huge. The route to smart governance is dialogue,” he added.

Friday’s meeting seeks to start an open dialogue between tech leaders of China and the United States on major challenges ahead with the acceleration of AI adoption across various industries.

It catalyzes a subsequent series of industry forums, working groups and other collaborations, focusing on Future Mobility, AI in Healthcare, AI in FinTech, AI in the Law, AI for Enterprise and Robotics and Drones.

Silicon Valley is “one of the most diverse places in the United States. … We welcome cooperation,” said Wozniak.