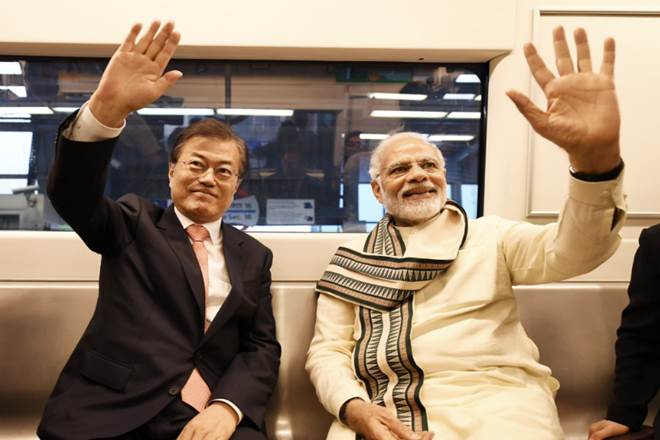 The prime minister’s office (PMO) tweeted a picture of the two leaders travelling on the Delhi Metro. (Twitter)

Prime Minister Narendra Modi and South Korean President Moon Jae-in took a ride in the Metro to Noida today. Both the leaders headed there for the inauguration of a Samsung facility to manufacture mobile phones. The prime minister’s office (PMO) tweeted a picture of the two leaders travelling on the Delhi Metro. Another picture tweeted by the PMO showed them at the Yamuna Bank metro station.

A DMRC spokesman said the leaders boarded a Metro train at the Mandi House station around 4:36 pm and reached the Botanical Garden station on the Blue Line at 05:02 pm. They travelled with tokens in a normal train with passengers and there was no delay in services on the Blue Line due to their movement, the spokesperson added.

The leaders also returned to Delhi in the Metro. While returning they boarded at the Botanical Gardens metro station in Noida at 06:56 pm and de-boarded at Mandi House at 07:21 pm. The ride to and from took 25 minutes each, PMO sources said. The South Korean President is on a four-day visit to India. “Undertaking the journey of development together! PM @narendramodi and President of RoK, Moon Jae-in travelling together in Delhi Metro en route to Noida for inaugurating manufacturing unit of Samsung Electronics,” Ministry of External Affairs spokesperson Raveesh Kumar tweeted along with pictures of the leaders travelling in a train.
The two leaders also visited Gandhi Smriti. “Paying homage to the Mahatma! PM @narendramodi and President of RoK, Moon Jae-in visit Gandhi Smriti,” Kumar tweeted. The prime minister had earlier taken a Metro ride with French President Francois Hollande to Gurgaon to inaugurate the interim secretariat of the International Solar Alliance (ISA). Modi had also taken the Metro during his Australian counterpart Malcolm Turnbull’s visit to the iconic Akshardham Temple in east Delhi.