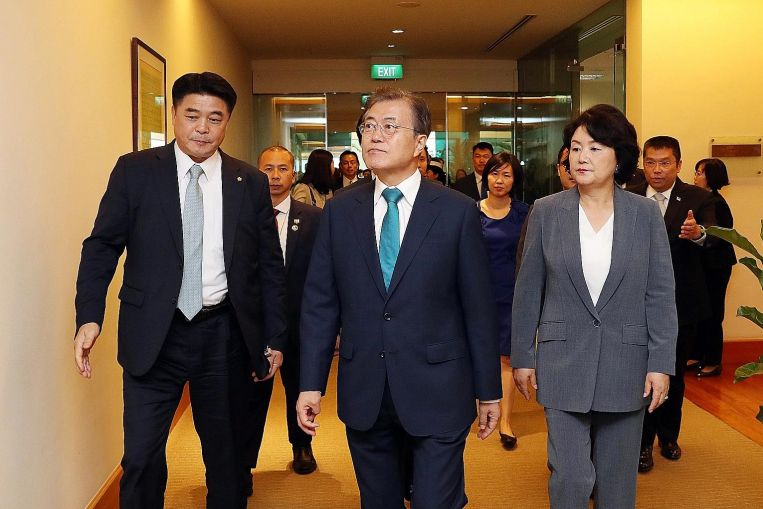 South Korean President Moon Jae-in said Singapore is “an important partner” whose cooperation is necessary for implementing one of his government’s top priorities – deepening ties with South-east Asian countries.

In a written interview with The Straits Times ahead of his three-day visit, Mr Moon also expressed hopes to build a strong friendship with President Halimah Yacob and Prime Minister Lee Hsien Loong, both of whom he will meet today.

Mr Moon, accompanied by First Lady Kim Jung-sook, arrived in Singapore yesterday evening. He will get an official welcome at the Istana today, and Madam Halimah will host a state banquet, while PM Lee will host him to lunch.

“Solid trust between the leaders of our two countries should provide impetus for further promoting forward-looking bilateral cooperation,” said Mr Moon, who is the first Korean leader in 15 years to make a state visit to Singapore.

Mr Moon, 65, first unveiled the New Southern Policy in Indonesia last November, aiming to achieve a more “balanced diplomacy” by elevating its engagement with Asean to the level of major powers such as the United States and China.

In his interview with ST, Mr Moon said South Korea and Asean are “optimal partners” on the path towards a future of peace and prosperity, noting that South Korea has actively supported the regional grouping’s efforts to create an Asean community. “It is also firmly committed to elevating ties with Asean to the level of those with the four major powers whose interests converge on the Korean peninsula,” he added, referring to the US, China, Russia and Japan.

He also said there is more that Singapore and South Korea can do together, although the two countries are rivals in many areas.

He cited how Korean companies have been involved in building major Singapore landmarks, including Marina Bay Sands, and said joint research and sharing of experience in areas such as artificial intelligence, fintech and biomedical services will “allow our two countries to take the lead in the era of the Fourth Industrial Revolution”.

Today, he and PM Lee will witness the exchange of several agreements to boost cooperation in trade, environment, small and medium-sized enterprises and start-ups. Tomorrow, he will deliver the Singapore Lecture titled “Republic of Korea and Asean: Partners for achieving peace and co-prosperity in East Asia”.

Chang May Choon and Charissa Yong