CHANDIGARH: Another accused in the multi-crore Bitcoin scam has submitted a complaint against dismissed UT police sub-inspector Naveen Phogat, accusing him of taking Rs 10 lakh bribe for favouring him in the case. 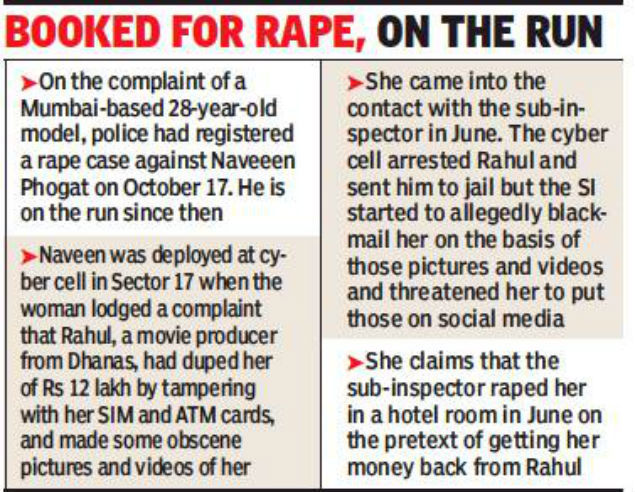 Rajesh Kumar, one of the accused in the Bitcoin scam, levelled the allegations. His brother filed the complaint on his behalf to the UT SSP, who forwarded it for inquiry to DSP (cyber cell) Rashmi Yadav.

Phogat has been absconding since he was booked for allegedly raping a Mumbai-based woman at the Sector 31 police station on October 17. The rape case investigation has been transferred to the crime branch.

On October 27, Phogat, had submitted a representation to UT DGP and demanded a fair and impartial inquiry by an officer not below the rank of inspector general of police (IG). Phogat had also accused SSP Nilambari Vijay Jagdale, cyber cell deputy superintendent of police Rashmi Yadav, and cyber cell inspector Jasminder singh of trying to frame him in the rape case.

Phogat had also claimed that his dismissal was in violation of the service rules and his fundamental rights. Phogat was looking into the multi-crore-rupee Bitcoin scam when he was suspended and transferred to police lines in July on the charges of taking Rs 30-lakh bribe from an accused.