What crash? The hottest crypto on the market has tripled in value

Binance Coin, also known as BNB, is used by holders to pay the fees levied by the exchange for trading. It’s also on the way to becoming a favourite medium of exchange for issuers of initial coin offerings, allowing startups to raise money by listing on one of the most liquid crypto exchanges with about $US1 billion ($1.4 billion) in daily trading volume.

What’s made Binance Coin particularly attractive is the company’s practice of tying the performance of the exchange to the amount of tokens in circulation.

After an ICO issued 200 million of the coins in July 2017, the company plans to spend 20 per cent of its profits each quarter to buy back and destroy Binance Coins – an undertaking that may continue for the next ten years, Zhao said in an interview. About 50 per cent of the coins were allocated to company employees and investors.

“We are in the same boat,” said Zhao. “We don’t want the price to drop, to be negatively impacted. We are very much aligned with our investors.”

The buyback, which is similar to what many public companies do with their shares, raises a concern that has long hung over the cryptocurrency market since its beginning a decade ago: whether the coins are actually securities. If that is the case, then tokens such as Binance Coin and the exchange would likely fall under the jurisdiction of local regulators, which many members of the crypto community have sought to avoid.

“Personally, I don’t think it’s a security,” Zhao said. “I don’t think that there’s any regulation against destroying assets you have yourself. In the worst case, we can stop the burning process.”

Binance has also been developing a public blockchain for the transfer and trading of digital assets that Zhao expects to be launched in two to five months. The network, called Binance Chain, will provide coin traders access to a decentralised exchange that handles transactions through an automated process, eliminating the need for a third party to hold and trade funds. 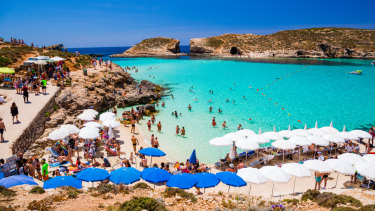 Binance is based in Malta. Credit:Shutterstock

Once Binance Chain is ready for prime time, Binance Coin will be moved to that digital ledger from the Ethereum network, and used to pay various transaction and listing fees. So-called validators, which will support the chain, will be required to hold certain balances on Binance Coins in the future as well, Zhao said.

Binance made about $US400 million last year, and expects profits of about the same amount, or a little more, which it receives in cryptocurrency, this year, Zhao said. The company doesn’t release audited financial results.

In the meantime, the company is seeking to raise the profile of Binance Coin in ways that harken back to the heydays of the crypto bubble.

Zhao’s staff as well as 130 volunteers known as Binance Angels are organising user gatherings called MeetUps to sing the virtues of the coin. Photos of one recent event posted to Twitter show a woman in a Binance t-shirt standing by a poster saying, “Take BNB to the moon.”