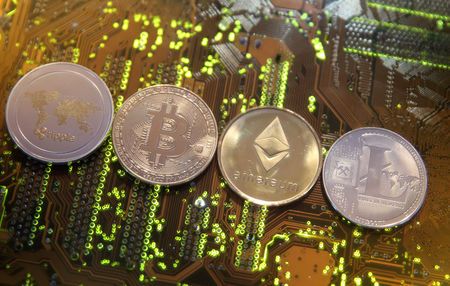 NEW YORK (Reuters) – Losses from the theft of cryptocurrencies from exchanges and fraud-related activities surged in the first quarter of the year to $1.2 billion (920.67 million pounds), or 70 percent of the level for all of 2018, cybersecurity firm CipherTrace said on Tuesday.

The value of losses from crime in the digital currency sector in 2018 hit $1.7 billion. But cryptocurrency crime has ballooned as the market has slowed down, prices have plunged and business activity has stalled.

In the first quarter of 2019, theft of digital currencies from exchanges and scams totalled $356 million, while losses from fraud or misappropriated funds amounted to $851 million, the respected U.S.-based CipherTrace said in a quarterly report.

CipherTrace said it included losses at Canadian digital platform QuadrigaX, where roughly C$180 million (US$134 million) in cryptocurrencies have been frozen in user accounts after the founder, the only person with the password to gain access, died suddenly in December.

“I would also add that insider issues such as fraud or theft have grown mostly due to operations outside of the U.S. where regulations are poor, or simply due to greed and mismanagement by young management teams at these cryptocurrency companies that are managing hundreds of millions or even billions of dollars.”

Jevans is also the chairman of the Anti-Phishing Working Group, a global organization that aims to help solve cyber crimes.

The CipherTrace report also said there was a major gap in the current cryptocurrency regulatory environment with respect to cross-border payments from U.S. exchanges to offshore exchanges, which are beyond the purview of U.S. authorities.

An analysis of 164 million bitcoin transactions showed that cross-border payments to offshore exchanges have grown 46% over the last two years, contributing to the $8.7 trillion, or 11.5 percent of the world’s wealth, hidden offshore, the report said.