A Coachella woman suspected of dumping 3-day-old puppies in a trash bin has relinquished the 38 dogs officials seized from her home last week as the puppies continue to make progress.

The dogs have been at the Coachella Valley Animal Campus in Thousand Palms since they were seized from Culwell’s home at the time of her arrest on April 22.

Culwell was arrested on suspicion of animal cruelty and animal abandonment after authorities identified her as the woman seen on a surveillance video tossing a plastic bag containing seven puppies into a trash bin outside the NAPA Auto Parts store in Coachella on April 18.

At the time of her arrest, animal services officers found another 38 dogs living in her home which they described as being in a state of disrepair. 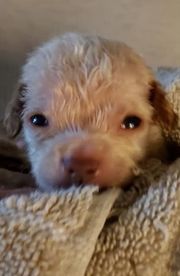 One of the six remaining puppies abandoned in mid-April. All six have opened their eyes, their caregiver told county officials. Monday, the caregiver released photos of the puppies. (Photo: Courtesy of Noni Boen Schirm)

The dogs, found to be in good health overall, remain at the animal campus in Thousand Palms and will be made available for adoption or transfer to the department’s rescue group partner organizations this week, Welsh said.

Because several of the dogs appeared to have recently given birth, officials could not tell which was the mother of rescued puppies.

Culwell has since told officials that they are from two different litters, Welsh said, and at this time there is no plan to reintroduce them to their mothers.

A woman who dumped a bag containing seven 3-day-old puppies behind a Coachella auto parts store is being sought by Riverside County law enforcement. USA TODAY

The puppies are being fostered by a volunteer with MeoowzResQ, a Southern California rescue group. One of them, believed to be the runt of the litter, died Wednesday night.

The remaining six puppies are doing well and have all opened their eyes.

“The woman who has graciously dedicated many hours and a fair amount of her own money toward these abandoned puppies is doing a great job,” Dr. Allan Drusys, Animal Services director and chief veterinarian, said.

“We don’t want to interrupt her wonderful work with the two mothers, especially since time has passed and the mothers may reject the pups at this stage,” Drusys said.

The volunteer, Noni Boen Schirm of Rancho Cucamonga, told The Desert Sun the puppies had their first baths on Sunday.

Thank you! You’re almost signed up for Climate Point: California

Keep an eye out for an email to confirm your newsletter registration.

Schirm is a critical care rescuer and bottle feeder and said has been caring for puppies, kittens, baby guinea pigs and rabbits, birds, hamsters and pigs for 21 years. She has worked for the San Bernardino city shelter for that period, as well.

She said all seven of the discarded puppies had mild colds when they arrived and had to have medication. As they started to get healthier, they also started eating better, she added.

They were weak when they arrived and she didn’t think any of them would make it. 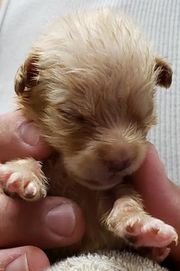 One of the six remaining puppies abandoned in mid-April. All six have opened their eyes, their caregiver told county officials. Monday, the caregiver released photos of the puppies. (Photo: Courtesy of Noni Boen Schirm)

“Most pups wiggle and crawl. These guys didn’t do anything but just slept like lifeless kind of,” she said. “I started them on fluids a little bit at a time, then got them warmed up before I fed them. I can’t feed them while their bodies are cold, they’d go into shock. So it was a long process to where they are now.”

She was saddened when one died on Thursday and believes it may have been at the bottom of the pile in the plastic bag and suffered the most injury when tossed into the trash bin.

“He cushioned the fall for the others,” Schirm said.

They are being fed Esbilac, a milk formula for puppies, by syringe, about 15 milliliters each.

They didn’t know how to swallow and wouldn’t take even 5 milliliters of Esbilac when they were first brought to her, so she had to tube feed them.

“They have problems with their sucking reflex,” she said. “Most pups can suck on the bottle, these guys can’t figure it out.”

She will keep feeding them by syringe rather than bottle because she doesn’t want to risk them aspirating and dying.

It is an around-the-clock job for Schirm, she said.

Desert Sun reporter Sherry Barkas covers the mid-Coachella Valley cities of La Quinta, Indian Wells, Rancho Mirage and Palm Desert. She can be reached at [email protected] or (760) 778-4694. Follow her on Twitter @TDSSherryBarkas