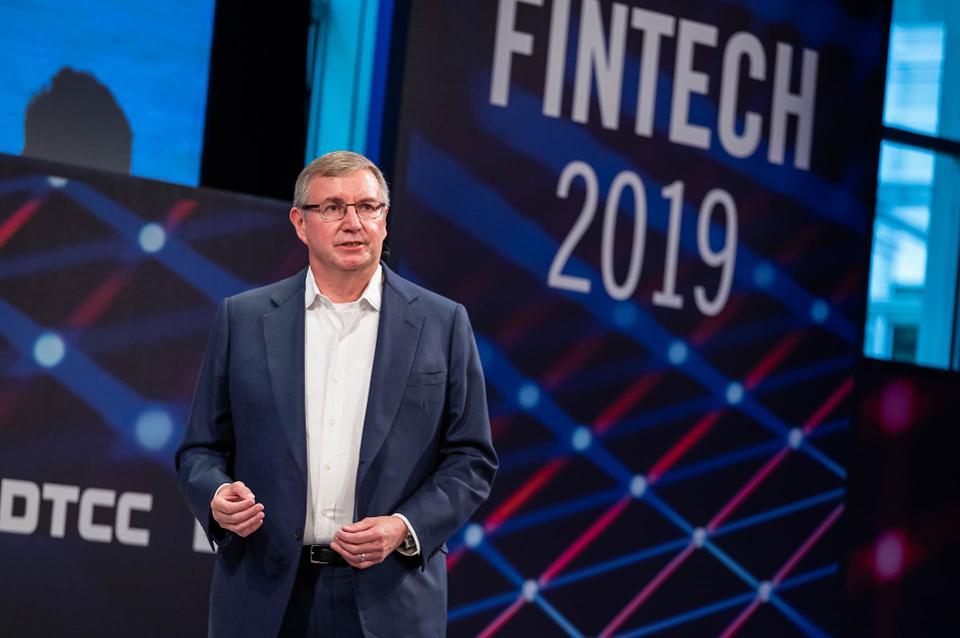 Cryptocurrency took center stage at the annual Fintech Symposium hosted by the Depository Trust and Clearing Corporation, which keeps the master record for $48 trillion worth of stocks, bonds, and other assets. Literally. While other hot technologies like artificial intelligence and cloud were all highlighted in various ways, the only two panels at the event, featuring DTCC clients, were on cryptocurrency an the underlying technology that makes it possible, blockchain.

As the DTCC is in final preparations to launch its own blockchain, or distributed ledger technology (DLT) solution, designed to store information on $10 trillion worth of transactions annually, and last month published its first paper on how securities issued on a blockchain should be managed, the event seemed part an update on what is possible, and part a preparation of what is actually to come.

“The potential of DLT is undeniable,” said DTCC CEO Michael Bodson, reading from prepared remarks. “But the question remains whether its enormous power to transform financial services will ever be fully harnessed. Personally, I have confidence in the technology, but our own experience with it reinforces that it’s going to take time and patience, and much more hard work and practice.”

Following Bodson’s opening remarks, which at once touted the potential of blockchain to modernize global financial infrastructures and compared the technology’s development to binge-watching “episodes of the technology hype cycle,” was a panel on cryptocurrency and other crypto assets featuring executives from Northern Trust, Fidelity and New York Stock Exchange sister company, Bakkt.

“It is part of our hope that there’s institutional interest for crypto,” said Bakkt CEO Kelly Loeffler, who previously worked for 15 years at NYSE parent company Intercontinental Exchange. Bakkt is building an institutional infrastructure for cryptocurrency trading, starting with custody services later this year, followed by crypto futures, and eventually payments.

In addition to filing with the New York Department of Financial Services to become a qualified custodian, and acquiring a cryptocurrency custody company, Loeffler highlighted coffee giant Starbucks as a launch partner for a nascent project designed to let businesses actually accept cryptocurrency in exchange for goods and services with the assurance of working with a trusted provider. “They can get the benefits of crypto assets,” she said. “Without being exposed to some of the risks.”

A poll taken by the audience of about 300 DTCC customers and others showed that while 74% of the audience’s employers were participating in blockchain projects expected to be rolled out to customers, only 23% were planning to implement a business solution involving cryptocurrency. The three largest obstacles to the audience deciding to invest in cryptocurrency were regulatory uncertainty (29%), valuation approach (29%) and fraud (21%). 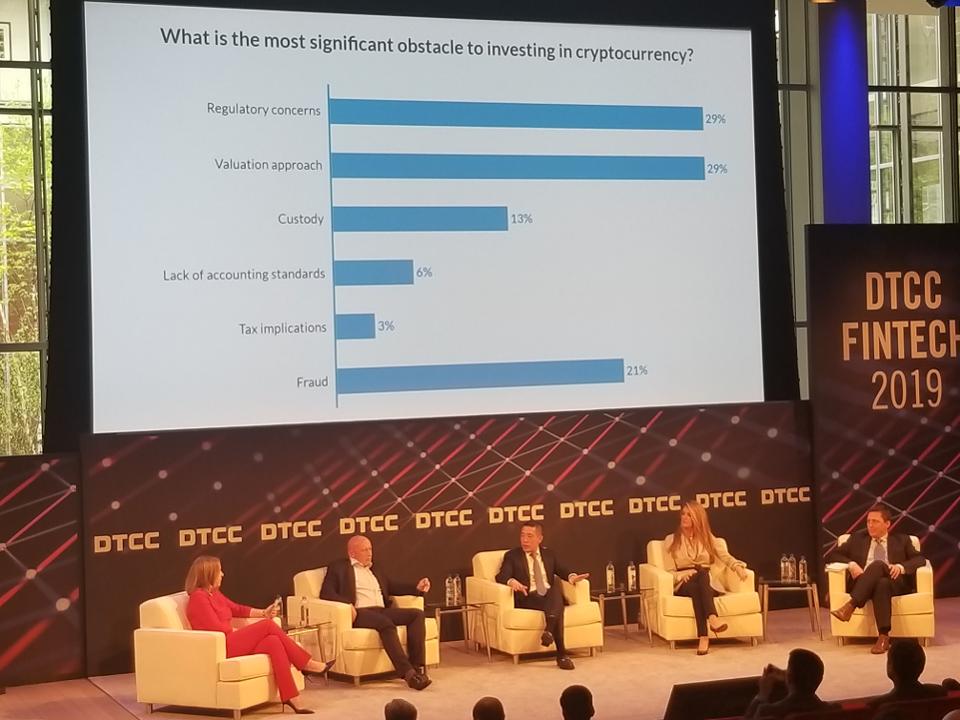 A panel on cryptocurrency at the 2019 DTCC FIntech Symposium, featuring data from an audience survey.

Also on stage for the same panel was Bob McElrath blockchain architect for Fidelity Digital Assets, a subsidiary of Blockchain 50 member, Fidelity Investing. Similar to Bakkt, Fidelity is also making a play in crypto custody, and is already providing support for hedge funds, retirement funds, endowments, and more, he said. Going forward, McElrath predicts a proliferation of cryptocurrencies pegged to fiat currencies, or what he called “dollar coins,” securities issued on a blockchain and trading of a wide range of these an other assets without reliance on a custodian at all. Ironically though, its mastering custody that he says is the first step other, more innovative blockchain applications. “If you can’t do custody,” he said. “You can’t do anything else.”

When pressed by panel moderator and DTCC managing director Jennifer Peve on what actual problems bitcoin solves, McElrath, gestured to the audience, saying that it was a lack of trust in many of the institutions in the room that was the first problem bitcoin solved. The second benefit of bitcoin was to as a counter to risk absorbed in other more traditional investments. “The purpose of bitcoin is a hedge against very large scale failure,” he said.

While Fidelity and Bakkt are largely focused on cryptocurrency custody, asset management giant and Blockchain 50 member Northern Trust focuses on helping its traditional hedge fund clients calculate the net value of their cryptocurrency assets and other fund administration activities. Originally announced at Forbes, the variety of hedge fund support services for cryptocurrencies and other crypto-assets, falls short of actually holding onto the assets for the clients.

However, Northern Trust’s global head of market advocacy and research, Justin Chapman, says the firm has other crypto products already built. “We have the technology that we can deploy on digital assets and potentially cryptocurrencies, if the demand from the clients is there,” he said. Specifically, Chapman said he’s waiting for a critical mass of interest to form from market makers, brokers, exchanges and other firms. “We need buy in from firms and participants in the ecosystem,” he added.

One possible way forward discussed at the event came during an earlier conversation between DTCC CEO Bodson, and Martin Chavez, the global co-head of Goldman Sachs’ securities division. In a sweeping conversation that went all the way back to Chavez’s time at Harvard studying the Byzantine Generals problem that bitcoin solves, of how to earn trust in a complicated system, the Goldman exec debunked earlier reports that his company was ever considering opening a bitcoin exchange, adding however, that it wanted to hire the best bitcoin talent to better understand blockchain.

While cryptocurrency itself isn’t likely in Goldman’s near future, Chavez added the caveat that he expects to see other companies adopting so-called “stable coins” that are backed by traditional, less volatile assets such as dollars, but have the benefits of instant transfers, 24-hour availability, and no charge-backs offered by assets on a blockchain. The biggest uncertainties surrounding this possibility, he said, are who will define the standards of such technology and who will own it? “How’s it all going to look?” he asked. “I’m not sure.”

Other forms of blockchain adoption discussed at the event, didn’t focus on cryptocurrency at all. In a panel moderated by the global head of Accenture’s financial services and blockchain practice, David Treat, speakers from Amazon, State Street and the DTCC (all Blockchain 50 members) spoke about how blockchain was adding to their business.

The DTCC’s chief architect, Rob Palatnick, reviewed plans to move records for $10 trillion worth of transactions annually to the AxCore blockchain, a fork of ethereum designed for enterprise needs, as well as his new role as the chairman of Hyperledger, a blockchain consortium providing open-sourced software catering to enterprises.

One of Hyperledger’s founding members, U.S. custody bank State Street, was also on stage with Palatnick. State Street’s managing director of global technology services, Nathaniel Rand, talked about the company’s efforts to simplify reconciliation by moving various banks to a shared, distributed ledgers. Slowing adoption however, is that while many banks are building similar blockchain solutions, they’re not all using the same technology, which re-introduces the old problems.

“It’s like a dating game,” Rand said. “And you can’t find a match.” As more companies either agree to build on the same platform, or create bridges for seamlessly linking the shared ledgers, real-time reconciliation— and the associated savings—becomes increasingly likely. “2020 is when we expect to see some of the benefits of the network effect,” he added.

Of the companies on stage at the symposium, Amazon was the latest to the blockchain game. Speaking during the same panel, Amazon Web Services’ head of worldwide financial services business development, Scott Mullins, explained the delay. “We’re not a product company, we’re a company that likes to build services that work backwards from problems,” he said, adding, “We could not find a discreet problem we were solving with this technology.

After years of research however, the company launched two different services earlier this year, one a more traditional blockchain service that makes it easier to build networks—using any number of Hyperledger platforms or ethereum—with parties who do not fully trust one another; and another for trusted parties that doesn’t rely on blockchain at all. “We’ve had a journey of our own, both from supporting customers and the use cases they have, all the way up to some discreet problems that we think we can provide services for.”