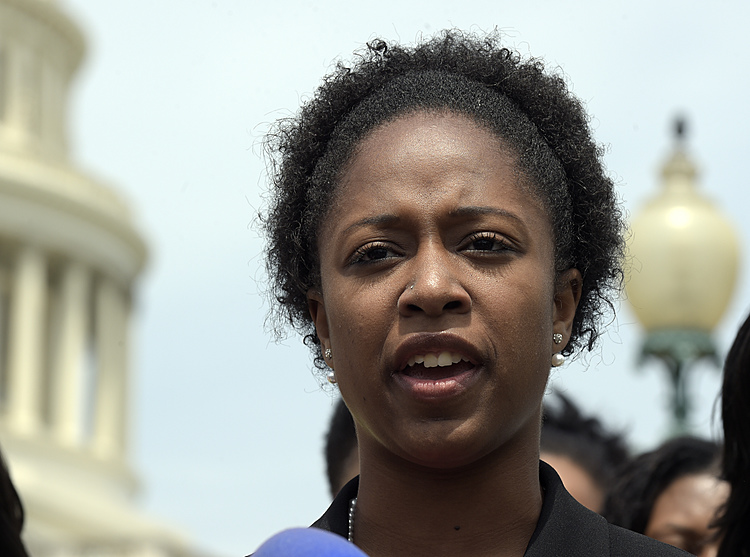 COLLEGE PARK, Md. (AP) — The first black woman to serve as American University’s student government president is seeking more than $1.5 million in court-ordered damages against a neo-Nazi website operator who orchestrated an online harassment campaign against her.

In a court filing Monday, Taylor Dumpson’s attorneys asked a federal judge in Washington for a default judgment against The Daily Stormer founder Andrew Anglin and a follower accused of racially harassing Dumpson on Twitter. Dumpson sued Anglin and the internet troll last April, but neither responded.

Dumpson seeks a total of more than $1.8 million in damages, fees and costs, including $1.5 million in punitive damages against Anglin and his company, Moonbase Holdings LLC.

Anglin’s website takes its name from Der Stürmer, a newspaper that published Nazi propaganda in Nazi-era Germany, and includes sections called “Jewish Problem” and “Race War.” For months, the site struggled to stay online after Anglin published a post mocking the woman killed by a man who plowed his car into a crowd of counterprotesters at a white nationalist rally in Charlottesville, Virginia, in August 2017.

In February, attorneys for SiriusXM Radio show host Dean Obeidallah asked a federal court in Ohio to award him more than $1 million in damages for his claims that Anglin falsely accused him of terrorism.

Anglin hasn’t responded to Obeidallah’s suit, but he hired attorneys to defend him against a federal lawsuit that Tanya Gersh filed against him over a “troll storm” he unleashed against her family.

A federal magistrate ruled Anglin must be present in the U.S. for a deposition by Gersh’s attorneys from the Southern Poverty Law Center. Anglin says he lives abroad and claims it’s too dangerous for him to travel to the U.S. In an order last week, the magistrate warned Anglin that he faces a default judgment against him if he fails to appear for a deposition scheduled for this week.

In December, Dumpson reached a settlement with a third person she sued, Oregon resident Evan James McCarty. He posted on Twitter under the pseudonym “Byron de la Vandal,” an apparent reference to Byron De La Beckwith, who assassinated civil rights leader Medgar Evers in 1963. The settlement agreement required McCarty to get “anti-hate training,” apologize in writing and on video and publicly renounce white supremacy.

Anglin and the other remaining defendant, Brian Andrew Ade, weren’t involved in the settlement.

A day after Dumpson’s May 2017 inauguration as student government president, someone hung bananas with hateful messages from nooses on the university’s campus. Authorities investigated but didn’t identify any suspects. Anglin posted an article about the incident, including links to Dumpson’s Facebook page and the American University Student Government’s Twitter page.

“In the article, Anglin targeted Ms. Dumpson using racist language and directed his followers to ‘troll storm’ Ms. Dumpson by harassing her via social media,” her lawyers wrote in Monday’s filing.

Dumpson says Anglin’s article led to a barrage of threatening and harassing messages that caused her severe mental and physical trauma and left her fearing for her safety.

“Some days she was unable to carry on a conversation without having an anxiety attack, get out of bed and eat a proper meal, or do anything other than stare at the ceiling,” her attorney wrote.

Dumpson, now a law school student, is represented by attorneys from the Lawyers’ Committee for Civil Rights Under Law. Her suit accuses the defendants of violating the District of Columbia Human Rights Act of 1977 and the D.C. Bias-Related Crimes Act of 1989.