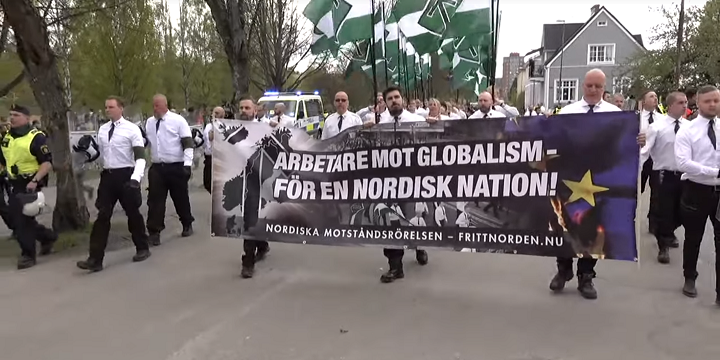 
A major Jewish group called on Sweden to ban an openly neo-Nazi organization that held demonstrations on Wednesday, and to increase protection for the local Jewish community.

The rallies, organized by the Nordic Resistance Movement (NMR), took place in the towns of Kungälv and Ludvika on the eve of Yom HaShoah, Israel’s Holocaust Remembrance Day.

The group’s stated political views including stopping “mass immigration” of non-northern Europeans, establishing “a National Socialist society,” and regaining “power from the global Zionist elite who have economically and militarily occupied the greater part of our world.”

About 250 people participated in the NMR demonstration in Kungälv, police said, while around 150 gathered in Ludvika, some of whom burned a European Union flag.

Counter-demonstrators were present in both towns, with around 500 showing up in Kungälv. Multiple individuals were accused of throwing various objects, including smoke-bombs and stones, at the neo-Nazi demonstrators, some of whom retaliated by wielding their flag poles as weapons.

A total of 61 people were detained on both sides, 40 for disorderly conduct, police said.

Other reported crimes include violations of masking prohibitions, drug offenses, and violations of the arms laws, police said. Investigations are ongoing.

“We had expected some confrontations and so it happened,” stated police commander-in-chief Erik Nord. “But the disruptions among the counter-demonstrators were so extensive that we had to prioritize it instead of intervening against [other] crimes, such as ethnic incitement.”

Addressing the NMR demonstrations in a letter to Swedish Prime Minister Stefan Löfven, World Jewish Congress CEO Robert Singer demanded on Wednesday “zero tolerance for such manifestations of evil,” and urged the government to do “its utmost to curtail this worrying development, by way of both firm denouncement as well as unambiguous action.”

The group attacked “innocent refugees with bombs and incendiary devices” and organized a march in Gothenburg on Yom Kippur, while “sympathizers repeatedly terrorized the small Jewish community in Umeå, ultimately forcing the closure of its center in 2017,” he charged.

“A ban on NMR, as is currently being urged in the courts in Finland, would prevent it from entering the political arena,” he added, “and would serve as a powerful demonstration that there is no place in Swedish society for this type of organized and violent hatred.”