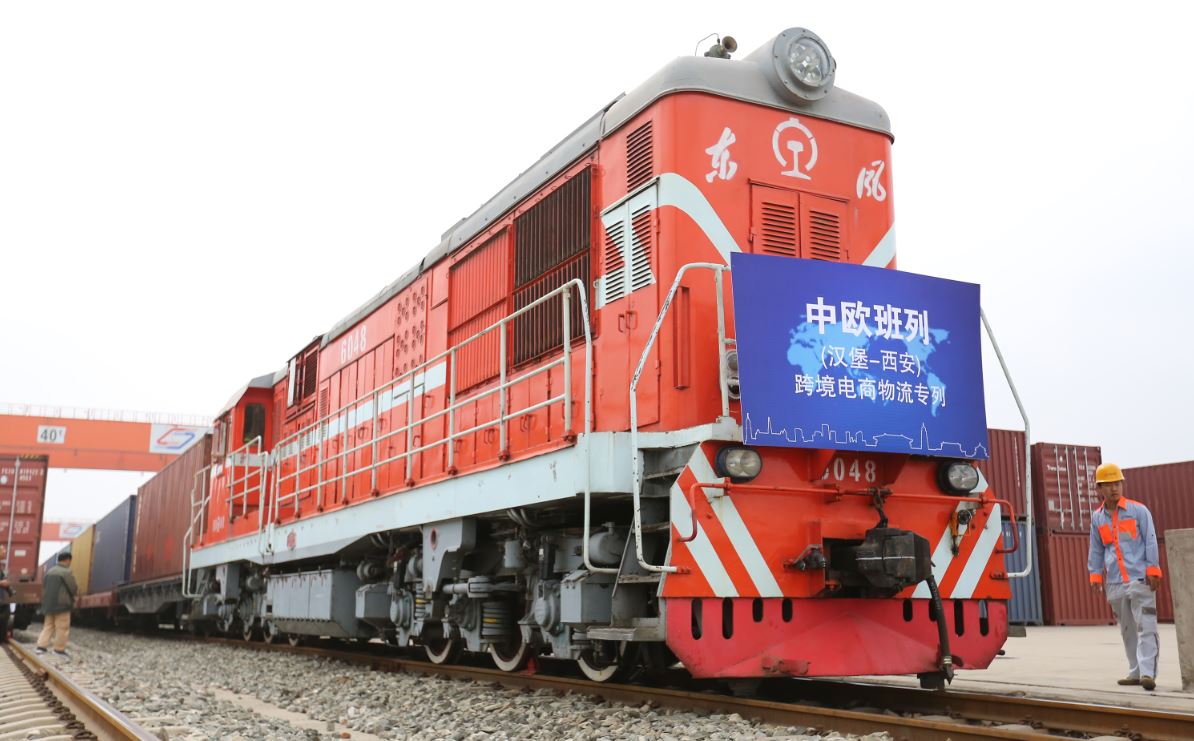 A railway employee stands beside a China Railway Express train in Xi’an, Shaanxi province. The train transports goods ordered via online platforms for deliveries to markets between Xi’an and Hamburg, Germany. [Photo provided to China Daily]

Shaanxi is taking advantage of the online Silk Road to develop cross-border e-commerce. Honey from New Zealand, coffee from Rwanda, durian from Cambodia, as well as healthcare products from Australia, are now all available through online channels.

He Jian, head of the management committee of the Airport New City of Xixian Area in Shaanxi, said on April 8 that Shaanxi completed its first cross-border e-commerce bonded import business in the Airport New City, building the online Silk Road that connects China’s northwestern inland region with the outside world.

“The Xi’an Xianyang International Airport now has 345 domestic airlines and 67 international airlines that connect 55 countries and regions around the globe. Three expressways, two inter-city railways and four subway lines meet at the airport, forming a multimodal transport center that can distribute cross-border e-commerce goods to anywhere in the shortest time,” He said.

Data from the Ministry of Commerce showed that in 2018, China’s cross-border e-commerce retail sales totaled 134.7 billion yuan ($19.5 billion), growing 50 percent on a year-on-year basis. Among them, import sales increased by 39.8 percent year-on-year to 78.6 billion yuan.

As cross-border e-commerce flourishes, it is deepening international cooperation. Under the framework of the BRI, the Ministry of Commerce has been promoting the online Silk Road, and has now inked deals with 18 countries and regions along the BRI, such as Australia, Cambodia and Italy.

“In the future, we will enhance policy support, perfect regulations, and create a more advantageous business environment for cross-border e-commerce, so as to realize the normalization of e-commerce among economies involved in the initiative as well as to promote trade liberalization and facilitation,” said Qian Fangli, deputy head of the ministry’s department of e-commerce.

Guo Tao, commercial counselor at the Australian Trade and Investment Commission, said “China is Australia’s largest trade partner, as the country is both Australia’s largest export destination and import resource. In the past, trade commodities between Australia and China were fixed in certain categories. But now, our business is more diversified.”

Data from the Australian Bureau of Statistics showed that in 2018, trade volume between China and Australia reached $143.1 billion, up 14.1 percent year-on-year.

“With the help of e-commerce, our trade relationship with China is even closer, and cross-border e-commerce is benefiting many Australian brands,” said Guo.

During last year’s Singles Day, China’s online shopping festival, which falls on Nov 11, Australia was the fourth-largest selling country to China on Alibaba’s T-mall platform. “With the online Silk Road built, our e-commerce trade with China is further enhanced. In the future, Australia is willing to participate more in the online Silk Road, and we are looking forward to working more closely with more cities, such as Xi’an, in China,” he added.

On May 11, the Xi’an Cross-Border E-Commerce International Cooperation Demonstration Zone was established, as the central government works to promote China’s northwestern region to the world, as well as promote reform and opening-up and the transformation of foreign trade.

He said the establishment of the Xi’an Cross-Border E-Commerce International Cooperation Demonstration Zone will open a new chapter in Shaanxi’s cross-border e-commerce development. In the future, the government will enhance support to the opening-up of West China, promote cross-border e-commerce among economies involved in the BRI, to build an inland area of reform and opening-up.

“This year marks the sixth anniversary of the proposal of the BRI, and we will continue to adhere to the principle of achieving shared growth through discussion and collaboration, encourage enterprises to develop cross-border e-commerce along the BRI, help countries and regions along the Belt and Road Initiative develop their digital economy to merge into trade globalization, maintain the multilateral trade system, promote the development of cross-border e-commerce, as a powerful momentum to the BRI construction, and constantly boost smooth trade,” he said.