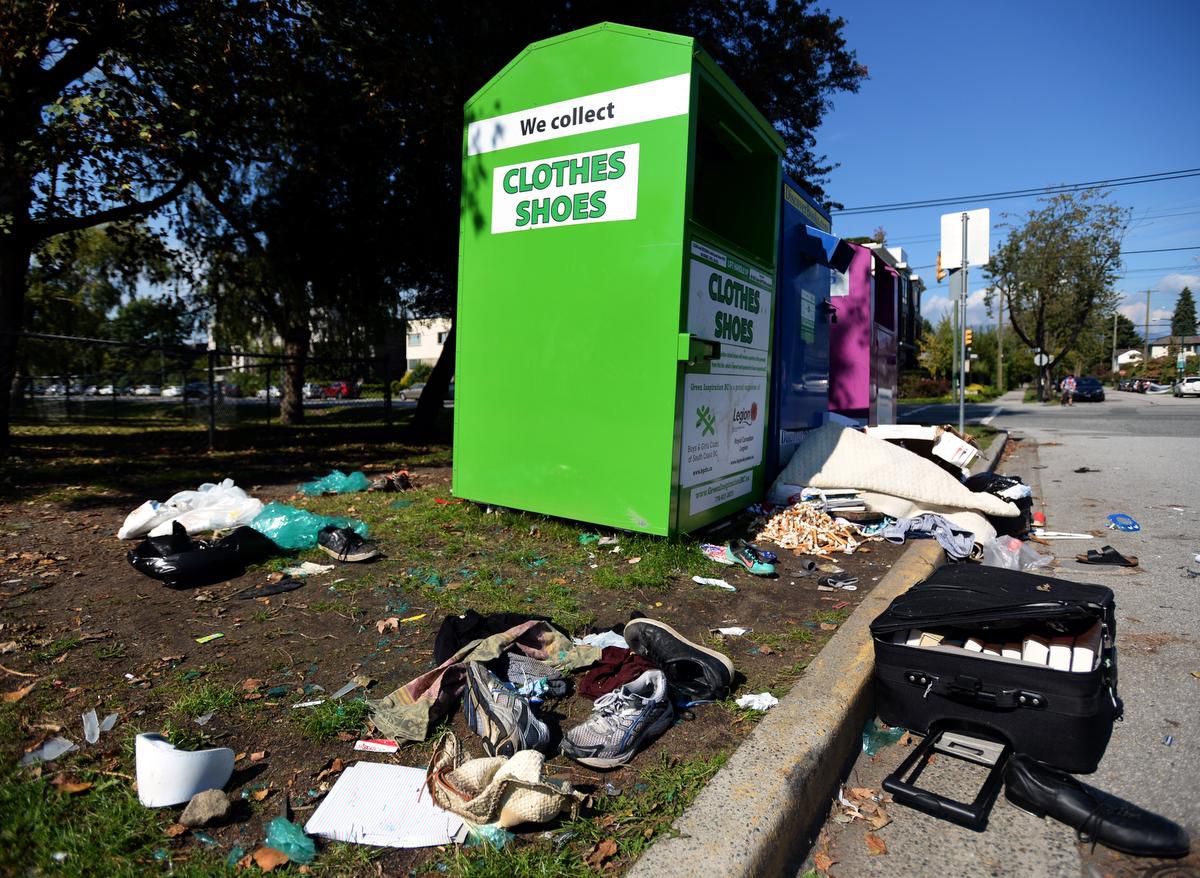 CALGARY—A southern Alberta city marked the latest case of a death in a charitable donation bin Monday, months after calls to make the boxes safer in the wake of two similar deaths in Ontario and British Columbia.

A 39-year-old woman died Monday after getting trapped in the opening of a bin in downtown Medicine Hat, a city of about 60,000 people located 300 kilometres southeast of Calgary.

Medicine Hat police said the woman was pronounced dead at the scene. Because her death is considered accidental, her identity hasn’t been released, and the provincial medical examiner is still investigating the exact cause of death.

Including this case, there have been nine donation-bin deaths in Canada since 2015. Five of those were in B.C., with the most recent instance being a 34-year-old man who died in the Vancouver area on Dec. 30, 2018. Just a few days later in Toronto, Crystal Papineau died after being trapped in a donation bin on a night when advocates said women’s shelters across the city were full.

Murray Jaster, the executive director of the Medicine Hat Salvation Army, said the bin where the woman died Monday was one of five his organization uses to collect clothing donations in the city. This bin, which has a mechanism to keep items from being taken out after they’re put inside, was behind the Salvation Army Thrift Store in downtown Medicine Hat. Jaster said it was decommissioned after the death.

Little is known about the woman. Police didn’t release details about her identity, but part of their response involved reaching out to social service agencies that work with “vulnerable populations” to remind people about the potential dangers of going into donation bins.

He died during a cold snap, trapped in a clothing donation bin. Poverty advocates say it’s time to act

‘She was such a beautiful girl’: Friends remember Crystal Papineau, who died after becoming trapped in a clothing donation bin

Jaster said he didn’t personally know the woman, but some of the people who stay in the Salvation Army’s 30-bed shelter or come to the organization’s hot-meal program knew her.

Jaster said he can’t recall another death like this in Medicine Hat over the more than 30 years he has worked in the city. But he has seen people who struggle with poverty try to reach in the bins to get dry clothing. It’s unclear what the woman in this case was doing when she died.

Charitable donation-bin deaths have prompted calls to replace the boxes with safer models. A task force at the University of British Columbia Okanagan even received funding this month to test a new bin design that would prevent people from getting stuck inside, as well as a retrofit option to make existing bins safer.

But people who work with those living in homelessness say that desperation often drives people to try to get to the bins’ contents, and while the boxes pose a problem that needs to be addressed, poverty is the root cause of the danger.

“You basically don’t have enough of anything — anything.

“Should we make (the bins) safer? Yes. But the problem is not going away, if a person is going in there for warmth or clothes or whatever it is. … It’s what happens to all of us as human beings when we live in chronic scarcity.”

Jaster said improving the bins’ design is worth considering, but he’s not sure what more his organization can do. But he’s seen first hand this week how traumatic these deaths are for the community, and he thinks trying to prevent tragedy while getting resources to people who need them is important.

“We’ve tried to do everything we feel we can do to negate these kinds of things from happening,” he said.

“It’s just a really tough thing. And unfortunately, in our line of work, those donation bins are part of that work in terms of how we’re able to collect items.”