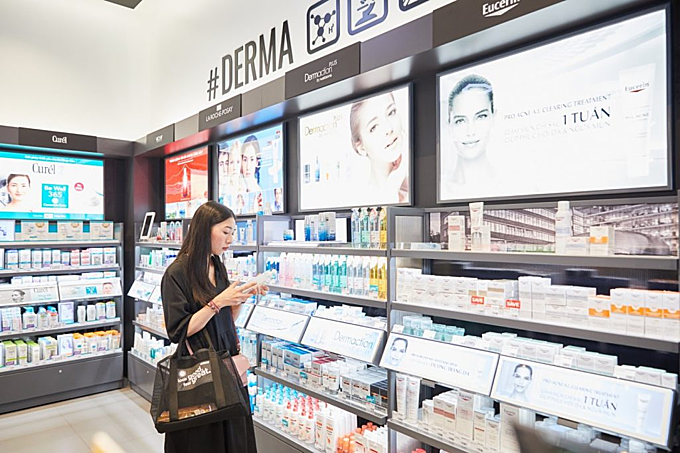 Many local and foreign health and beauty retail chains are eyeing the market. Hong Kong cosmetics giant Watsons, which has 12,800 stores worldwide, opened its first outlet in Vietnam in January.

Hong Kong cosmetics distributor Guardian has opened more than 90 stores in Vietnam since entering the country in 2011.

Local personal care chain, Medicare, established in 2001, said it is constantly looking to expand its product range as it faces mounting pressure from international competitors.

Bart Verheyen, commercial director of Medicare, said: “We are constantly looking for new brands that are looking to penetrate and find exclusive partners in the Vietnamese market. We are also looking for producers that can make our exclusive products.”

Next week pharmaceutical and cosmetics producer GeneWorld will begin selling natural cosmetics and organic beauty products. Vu Duy Quang, its director, said having newly entered the industry it wanted to begin with organic cosmetics products since it is the current trend.

According to global research firm Nielsen, the Vietnamese beauty and cosmetics market has much going for it like the growing middle class and increasing demand from young people, including men. Vietnam’s per capita spending on cosmetics is still very low at $4 spent compared to $20 in Thailand, indicating untapped potential.

According to a survey done in Hanoi and Ho Chi Minh City and released in June by market research firm Q&Me, the rate of people who wear makeup daily has increased to 30 percent now from 28 percent in 2016, while those who go completely without makeup fell sharply to 14 percent from 24 percent in 2016. The most popular makeup items were lipstick, foundation and blush.

Some 73 percent use skincare products once a week or more often. The most regularly used are facial cleansers, sunscreens and facial masks.

Patrick Mui, creative manager and consultant at Centdegrés Vietnam, a French brand intelligence and design firm, said Vietnamese producers could be split into two kinds: old brands like Thorakao and Lana who are well known but have not rejuvenated their brand image, and new, small and dynamic businesses who could capitalize on the potential of the market if they could leverage the online selling environment.

“Small and medium-sized cosmetics businesses who want to build a brand can take advantage of online channels.”

Among online cosmetics shoppers, Shopee is the most popular e-commerce site and Facebook the top social site.

Nguyen Manh Tan, marketing director of online marketplace Haravan, said online sales of cosmetics in Vietnam are second only to clothing. “Consumers, especially young buyers in Hanoi and Ho Chi Minh City, are turning to e-commerce not only for retail but also the beauty industry.”

This year many foreign brands have jumped on the bandwagon by selling on existing online platforms. American skincare company Clinique, which has 11 stores in Vietnam, began listing on Lazada in January, and Canada-based M.A.C did so three months ago.

Vietnam’s cosmetics market is estimated to be worth around $2.3 billion, according to U.K. market research firm Mintel.