ROME – Facebook and Instagram on Monday blocked the social media accounts of two Italian neo-fascist groups and some of their activists because they had violated the platforms’ policies against spreading hate, Facebook said.

Casapound and Forza Nuova, which espouse extreme right-wing ideologies, have boosted their profile in Italy by leading anti-migrant campaigns on their social media sites.

“This is an abuse by a private multinational in contempt of Italian law. A spit in the face of democracy,” he wrote in a tweet. Casapound had 250,000 followers on Facebook.

Di Stefano said his personal profile, which had 140,000 followers, had been shuttered along with those of a number of city councilors around Italy who belong to the group. 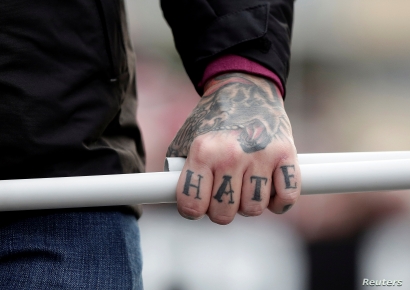 FILE – A tattoo is seen on a hand of a supporter of Italy’s far-right Forza Nuova party during a demonstration in Rome, Italy, Nov. 4, 2017.

“This is another step towards the end of an organized season of hatred on social networks,” said former lower house speaker and left-wing lawmaker Laura Boldrini.

On Monday, Casapound and Forza Nuova supporters took part in a protest outside parliament to demand snap elections after the center-left Democratic Party replaced the far-right League in a coalition with the anti-establishment 5-Star Movement.

Some of those in the crowd were filmed making the stiff-armed fascist salute.