Walmart-owned Flipkart said on Wednesday it would resume services and Amazon said it was working with the government to enable its deliveries after state governments reached out to the firms, which had temporarily stopped accepting new orders amid reports of police high-handedness.

The Delhi police issued a statement saying they were proactively engaging with e-commerce portals and were issuing passes to ensure agents were able to commute seamlessly and deliver essential goods to residents during the 21-day lockdown. The Bengaluru police, too, came out with guidelines for issuing curfew passes.

Following this, Flipkart Chief Executive Officer Kalyan Krishnamurthy said, “We have been assured of the safe and smooth passage of our supply chain and delivery executives by local law enforcement authorities and are resuming our grocery and essentials services later today (Wednesday).”

Similarly, a note on Amazon India’s Pantry page said, “Dear customers, due to local restrictions, we are not able to deliver. We are working with the government authorities to enable us to deliver essential items. We will communicate through e-mail/SMS when we have an update”. It also offered customers the option of cancelling orders. The Bengaluru police, too, came out with guidelines for issuing curfew passes.

These developments came after e-commerce firms sought the support of local governments and police authorities to meet customers’ needs after there were reports of some deliver personnel being beaten up while on duty. Additionally, officials of the Confederation of All India Traders met Union Home Secretary Ajay Bhalla, Department for Promotion of Industry and Internal Trade Secretary Guru Prasad Mohpatra and highlighted the issues faced. 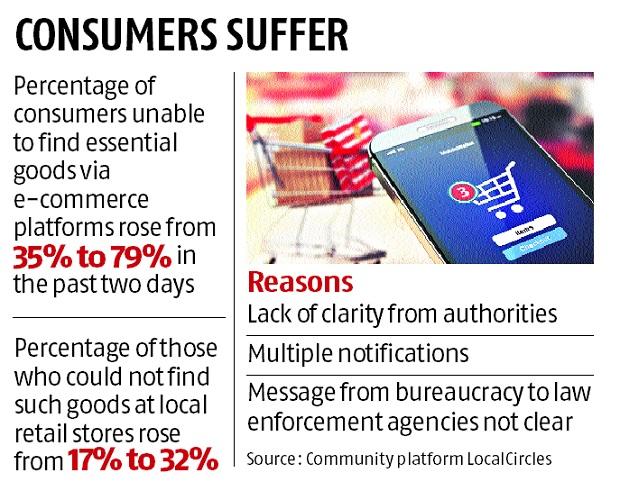 Earlier in the day, Amazon India had said it had temporarily stopped accepting orders and was disabling shipments of lower-priority products. It was prioritising products that customers needed most during the lockdown.

A senior industry executive said that the lack of clarity on the rules had made matters worse. “The authorities keep coming up with circulars that are contradictory to the previous ones, and this is creating confusion,” the executive said.