It’s been 11 days since the third bitcoin block reward halving. Data now shows that the overall SHA256 hashrate lost around 47 exahash per second (EH/s), since the all-time high of 140 EH/s on May 3. With more than 33% of the hashrate lost, reports stemming from Sichuan China indicate that bitcoin mining operations have been dealing with electrical shortages, and some operations have been forced to shut down machines.

Just before the third bitcoin halving, which cut miner revenue by 50%, the overall BTC hashrate spiked to around 140 EH/s on May 3, 2020. The network hit this monumental milestone, seven days before the notorious block reward halving. After the halving was complete, observers noted that the hashrate only dipped by 10-15% around 48 hours later. However, hashrate charts and data have some significant lag, and most of the time hashrate is measured in 3-12 hour intervals. 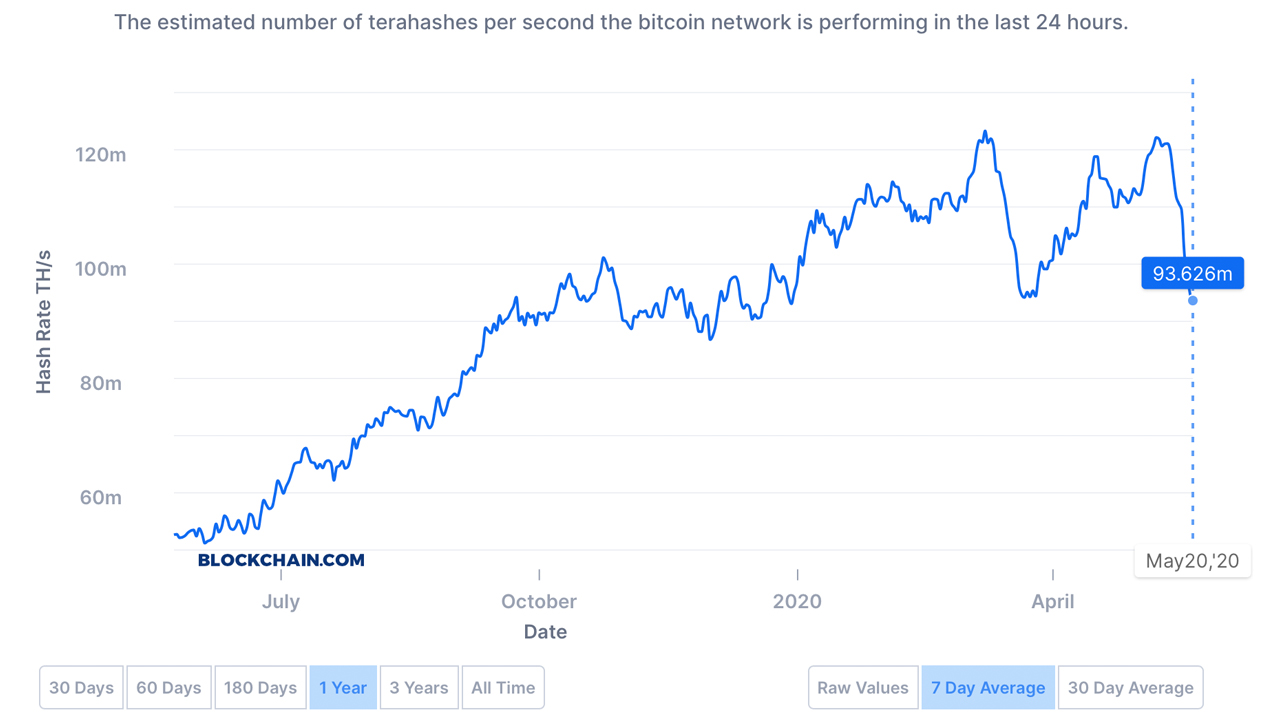 For instance, Blockchain.com statistics show the BTC hashrate is 93 EH/s on May 20. Fork.lol data shows that the hashrate has dropped even lower to just above 80 EH/s during certain periods, between May 20 until May 22. From the all-time high (ATH) on May 3, the BTC chain has lost 47 EH/s so far or roughly 33% since the ATH.

The BTC network difficulty also dropped by 6% on May 20, 2020, and whenever the difficulty drops it can be attributed to miners leaving the network. Additionally, the price of BTC has dropped from a high of $9,900 to a low of 9,100 on May 22. When the price of BTC drops lower in value it makes it more difficult for miners to prosper. Even the first signs of miners dropping off the network, meant a downward adjustment was in the cards for BTC’s overall mining difficulty. Today there are 17 known mining pools processing blocks on the BTC network. The top five BTC mining pools include F2pool, Poolin, Antpool, Btc.com, and Okex. F2pool on May 22, 2020 shows that it currently commands 27% of the BTC network hashrate.

One reason miners may be dropping off the network is due to issues in the Chinese province of Sichuan right now. There are two reports written by the regional financial columnist, lylian Teng, that show miners in the Sichuan region have a number of difficulties to deal with at the moment. One issue is the fact that the temperature in Sichuan has been hotter than usual which has been deterring the start of the region’s massive wet season.

The wet season every year, helps fuel hydropower plants that are located all around the province of Sichuan. Chinese bitcoin miners have always flocked to Sichuan, and the region is probably one of the most densely populated mining operation locations worldwide. lylian Teng reports that the local Sichuan government has been complaining that the region’s electrical load has increased by 22%. 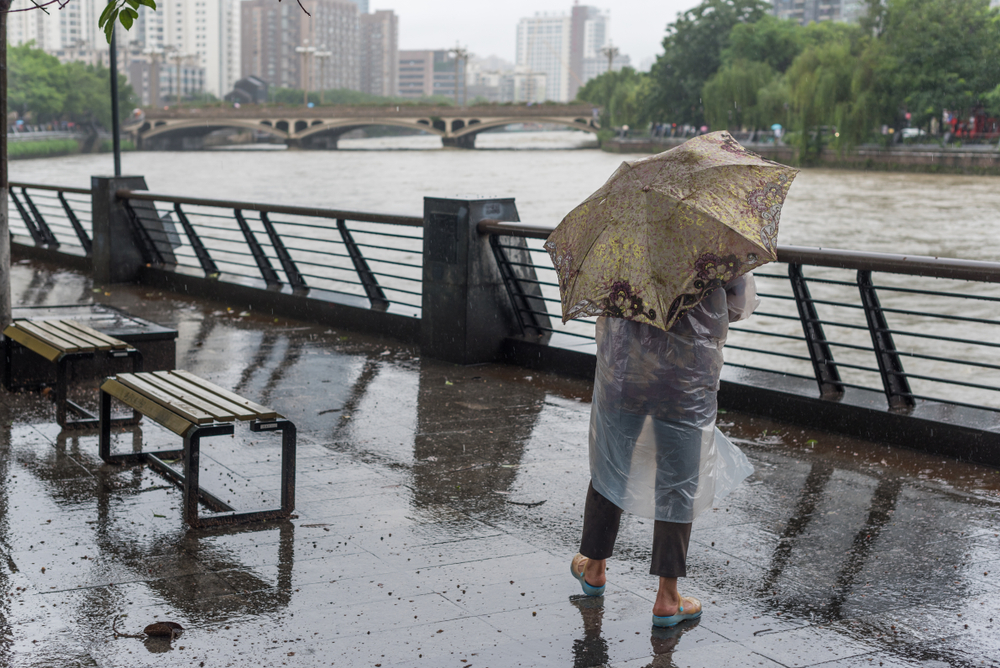 Chengdu, Sichuan Province, China. The photo shows a man with an umbrella watching Jinjiang river in flood after heavy rain in Sichuan province, two years ago when the wet season was very powerful.

There has been a “shortfall of hydroelectricity supply,” the report notes. This issue has led to electrical shortages and some mining operations have had to shut down machines. Teng discussed the subject with local mining operations who have told her that the “rainy season this year has delayed and the prolonged high temperatures in Sichuan have led to a surge in electricity demand.”

“Some mines have got power cut for over three days, and some are only allowed to mine during the night,” explains a mining farm owner who operates in Sichuan. “Areas close to Sichuan’s capital city Chengdu like Wenchuan are suffering from severe power outages, while remote places like Ya’an and Kangding, with small electricity demand and sufficient rainfall, see few power failures,” the miner added. 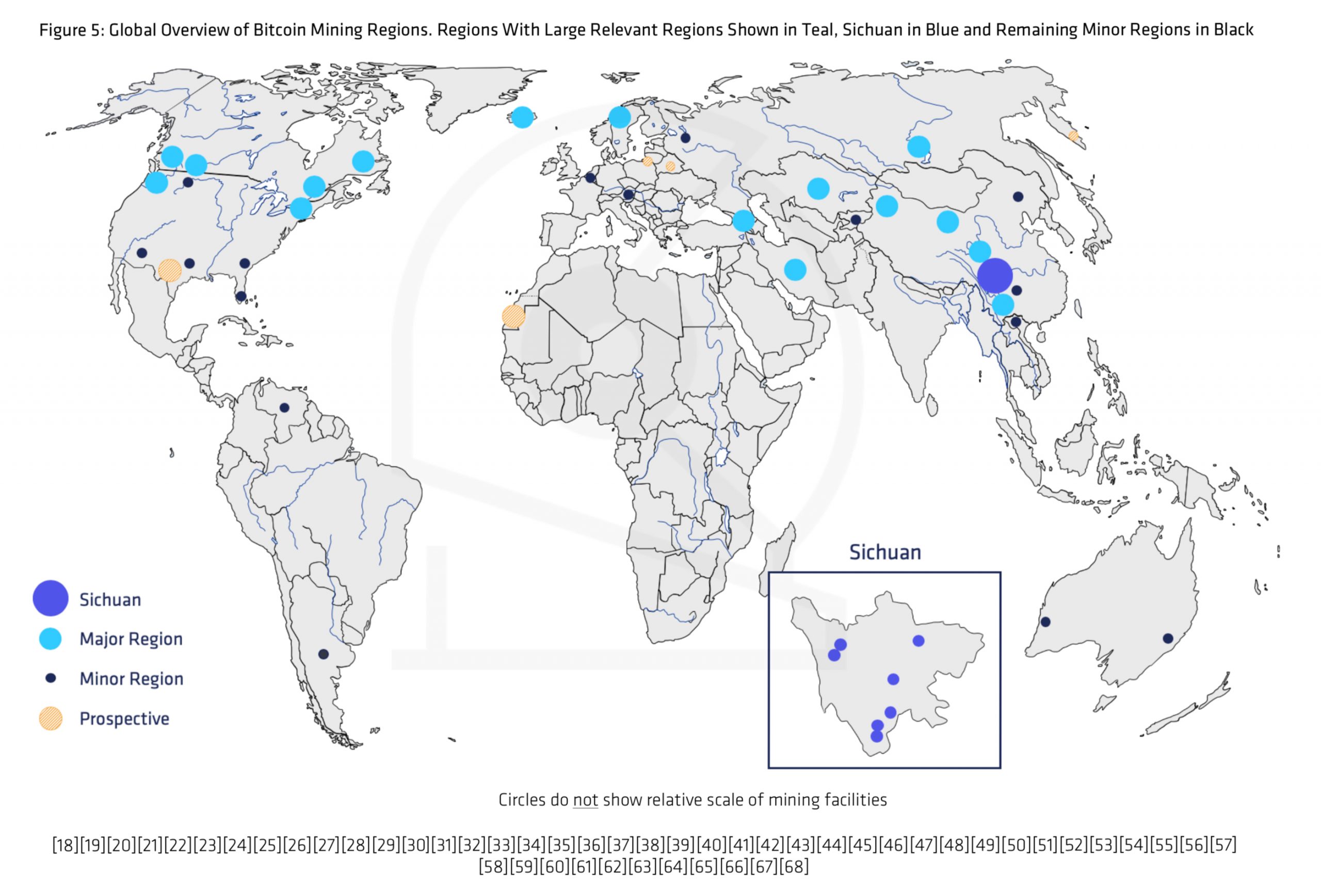 Concentrations of global bitcoin miners according to Coinshares stats in December 2019. At that time, China captured 65% of BTC’s processing power and the Sichuan region has always been the most densely populated mining region in the world.

Another report notes that bitcoin mining in the province may be “attracting too much attention” and assumes a government “crackdown” could come to fruition. A leaked Sichuan government document indicates that local officials believe bitcoin miners are taking advantage of the region’s cheap electricity.

The notice reportedly issued to all local offices of the financial regulator went on to request that regional governments use mandatory measures around power supply, electricity price, land use, taxation and environment protection to ensure existing bitcoin mining activities are phased out. 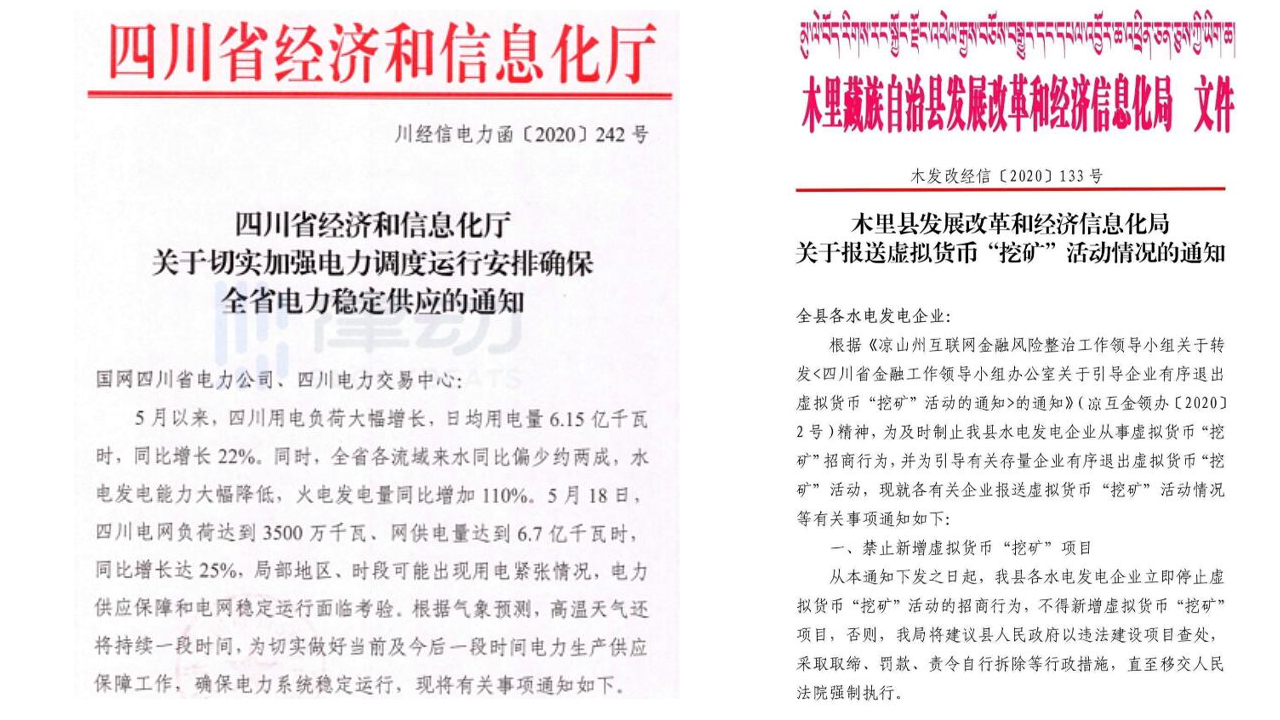 There’s a lot of mixed messages when it comes to the local Chinese governments and bitcoin mining rules. The latest news on alleged crackdowns in Sichuan, follows the report that had shown the local government of Ya’an city in China’s Sichuan province, was encouraging bitcoin mining throughout the province. In 2018, however, Sichuan lawmakers had an entirely different opinion and a number of statements published or leaked had shown a few Sichuan politicians called mining operations “wasteful” and discouraged the business.

What do you think about the hashrate drop and issues in China’s Sichuan province? Let us know in the comments below.