Analyst Explains Why Latest XRP Price Rally May Fizzle Ahead

XRP emerged as the best-performing cryptocurrency in the last 24 hours after staying quiet for weeks.

The fourth-largest crypto added up to $0.02, or 9.28 percent, to establish an intraday high at $0.254. While the gains appeared almost in sync with the rest of the cryptocurrency market, they propelled higher as Ripple Labs, XRP’s parent firm, survived two fraud allegations against it.

The U.S. District Court for the Northern District of California last Thursday dismissed charges against the San Francisco blockchain firm for violation of Section 17500 (prohibits advertising under the California Unfair Competition Law) and Section 1722 (forbids “fraudulent business acts or practices”).

An ongoing class-action lawsuit against Ripple Labs became one of the main catalysts behind XRP’s underperformance in the last 12 months. The plaintiffs accused the firm and its founders of selling them illegal securities in the form of XRP. That uncertainty related to the token’s legal status slowed down its uptrend. 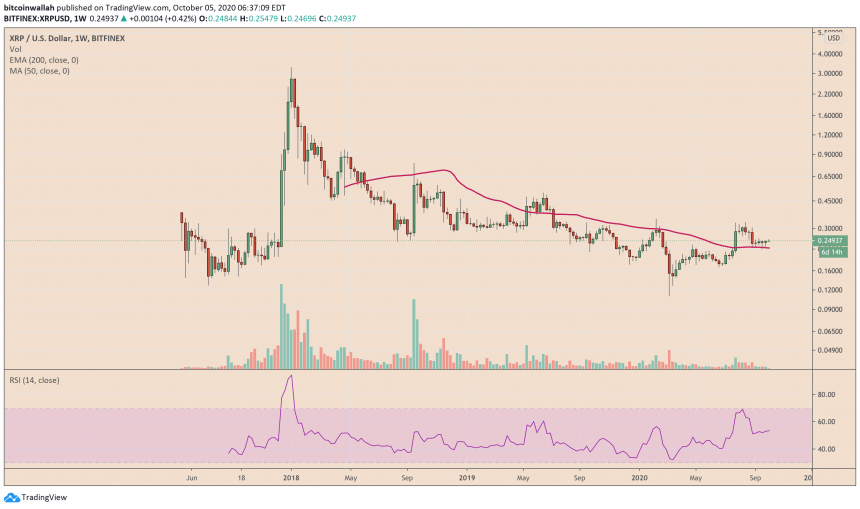 But now, with two out of three charges dropped, XRP showed signs of retaining its bullish bias this weekend. The third allegation, which concerns Ripple Labs’ CEO Brad Garlinghouse in the illegal promotion of XRP tokens, acts as the remaining bearish catalyst.

The daytrader noted that the Ripple token’s upside remains capped by a set of long and medium-term descending trendlines. They serve as a part of a so-called Descending Triangle, the support of which acts as a price floor for each of XRP’s bearish moves.

Mr. Prince tagged each bounce and pullback with successive alphabets, stating that XRP will hit ‘E,’ as shown in the chart above.

“XRPUSD is currently forming the final wave E of the major wave-count,” the analyst explained. “The pair is building in the descending-triangle-formation. That wave-count will end properly when XRPUSD bounces in the lower support-cluster marked in orange. It is where not only the lower boundary support is lying but also horizontal support in this range.”

He, meanwhile, anticipated the lower Triangle trendline to hold XRP, adding that the Ripple token may attempt another breakout above the resistance trendline.

“When XRPUSD manages to bounce properly within the underlying support cluster, the pair has to show further volatility finally moving above the upper boundary.”