NEW YORK, Oct. 16, 2020 /PRNewswire/ — Global peer-to-peer (P2P) cryptocurrency marketplace Paxful is highlighting the partnership with South Korea’s leading cryptocurrency exchange Bithumb Global. With 8 million registered users, 1 million mobile app users, and a cumulative transaction volume of over 1 trillion USD, Bithumb Global is the most influential digital currency exchange in the country. Like Paxful, they’re committed to providing opportunities to everyone in the world – the pooling of resources will help even more people gain access to financial freedom. 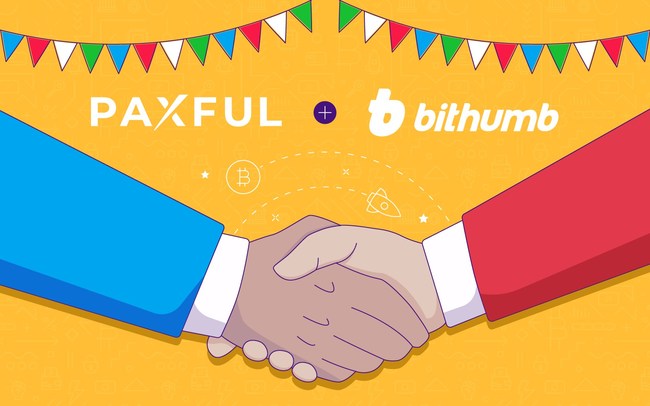 
South Korea is an important component of the cryptocurrency market, with an abundance of technological developments and digital currency exchanges in the country, as well as a high number of crypto adopters among its population. Following the recent announcement of a test distribution of digital won (CBDC) by the central bank, the country is on the way to becoming one of the major crypto nations.

“We are pleased to partner with Paxful to provide our users with a fast, secure, and more convenient fiat-to-crypto gateway. This collaboration marks another milestone in our global expansion,” said Javier Sim, co-founder and Managing Director of Bithumb Global.

Paxful will provide a fiat channel for Bithumb customers, giving access to over 300 different payment methods for buying cryptocurrencies. Acting as a fiat-to-crypto on-ramp, Paxful hopes the alliance will increase adoption, scalability, and real-world use cases for the entire cryptocurrency ecosystem.

“Paxful is proud to be joining hands with another industry leader whose goal is to remove the barriers for global transactions and bring financial inclusion to everyone. With growing global interest in digital currencies and blockchain technology, this partnership signals a move towards creating a truly global economy,” says Ray Youssef, co-founder and CEO of Paxful.

To seal this exciting agreement, Paxful and Bithumb Global launched a 5,000 USDT giveaway; users who use the kiosk trading system will have the chance to win from a pool of 5,000 USDT for successful transactions in an event that will run till 31 October 2020.

Paxful is a people-powered marketplace for money transfers with anyone, anywhere, at any time. Their mission is to empower the forgotten underbanked around the world to have control of their money using peer-to-peer transactions. The company, founded in 2015, has over 4.5 million users globally who you can instantly buy and sell Bitcoin (BTC) and Tether (USDT) using over 300 payment methods.

As part of their mission, Paxful launched #BuiltWithBitcoin, a social good initiative to build 100 schools funded entirely by bitcoin all across emerging markets.

Bithumb Global, part of the Bithumb family, is one of the biggest cryptocurrency exchanges based in Asia. Since its establishment, it has served millions of users around the world. Bithumb Global provides users with BTC, ETH, XRP, LTC, BSV, BCH, and other trading services like Spot and Margin Trading.