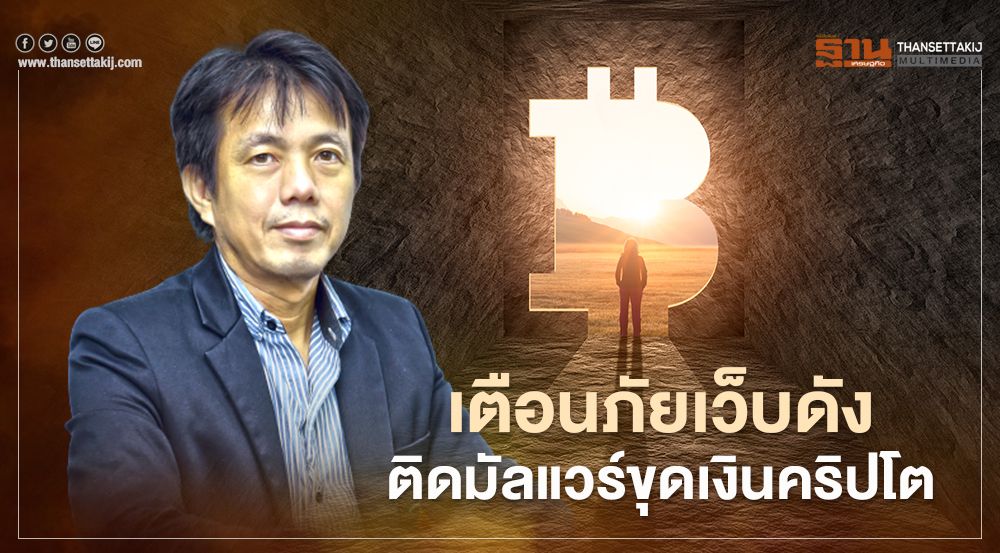 Dr. Chaiphon Khemaphatapan Dean of the College of Technology and Engineering Innovation (CITE) and director of the Master of Computer Engineering Dhurakij Pundit University (DPU) or DPU revealed that in the past 4 to 5 months, the value of cryptocurrencies has increased to a record high.Malware mining cryptoBack outbreak again Usually, there are two main ways to profit from major cryptocurrencies: trading and mining. In which mining requires large investment in equipment and the burden of electricity costs. Therefore, in order to save costs in such parts So there are hackers who want to mine crypto. By secretly embedding malware on computers that are web servers, people who open the web pages of these web servers act to mine cryptocurrencies without their consent or even knowing it. This method is called crypto jacking. (Cryptojacking)

Dr. Chaiporn said that in the past, Monero had been mining via Coinhive, allowing websites to embed their own programming code in exchange for crypto, but Coinhive shut down in 2018 due to: Crypto slump butMine crypto moneyNot going through the web Since the first crypto jacking was discovered around 2018, then by the end of 2020, it was more than 200% more infected with this type of crypto-jacking malware compared. In 2019, the websites that were the main target of hackers were those that were regularly visited or have a high number of readers. This includes websites that have left open or long-running pages, such as web portals, movie or music websites. Including the web of organizations or large agencies, etc. The initial survey found that many of the web sites in Thailand that are popular. There are many places for this type of malware infection. It is also possible that the web server has been hacked, or the programmer itself neglected, or intentionally embedded the program code on their website. To allow the user’s computer to mine crypto By allowing users to open such websites to pay for their service by helping to mine crypto instead However, according to research data, if a user opens 1,000 pages simultaneously with the malware, it is equivalent to a mining machine with a powerful graphics card.

“As for the crypto-jacking method, it is to embed a client script code, such as Javascript, in the code of the website program. The methods of embedding range from hacking through the system into the server and applying the code.Crypto mining programTo put it directly in the program code of that website Or the introduction of a program code used to run a cryptocurrency mining program Into the library that is free to use Most of them are published on the Internet or online, such as Git, for example. However, as many web servers have good defenses, it is difficult for hackers to break through. Therefore, it was found that the nature of malware infected by many websites came from inexperienced web developers or programmers. And write web program code with some programming code that uses code that has been published on the Internet, often without adequate verification, ”said Dr. Chaiporn.

Dr. Chaiporn said that in the past this type of malware will work byMine crypto moneyTo hackers by trying to use almost all of the user’s computer or mobile phone resources Malware running like this will cause the user’s machine to stop working in no time. Hence, hackers have developed new methods by making the malware run with less CPU and control the number of trades. Making users less aware As for the effect of users opening malware-infected websites, the user’s computer or mobile phone will slow down. Until sometimes even causing the machine to freeze Noticeable after visiting the website and the machine began to delay The CPU fan starts. Or the battery runs out quickly Therefore, unaware users may need to observe the operation of computers or mobile phones when accessing websites, if the device starts experiencing such symptoms, they must be examined immediately.

“Tesla” pushes the Bitcoin price up to New Heights

Binance pointed out that crypto continues to rise