Bitcoin Replaces Gold as the Global Index of Fear and Greed

Bitcoin (CCC:BTC) has taken over from gold as the global index of fear and greed. 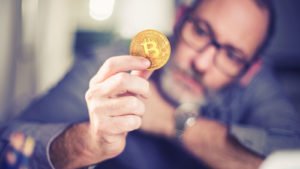 It’s an index of fear because the quantity of Bitcoin is limited. It’s an index of greed because it’s portable, living only inside computers and on thumb drives and used only through the internet.

Thus, there has been a second run on Bitcoin, even bigger than the one in late 2017 that took it to nearly $20,000. On Feb. 22, Bitcoin was trading at over $57,000, representing 61% of all cryptocurrencies and a market capitalization of over $1 trillion.

The Index of Greed

The latest run began in November with the price near $13,000. It has been helped by celebrity endorsements from Tesla (NASDAQ:TSLA) CEO Elon Musk and actor Lindsay Lohan.

Musk put $1.5 billion of Tesla’s cash into Bitcoin and said the company would start taking it as payment for vehicles. The famous “Bitcoin Pizza” order in 2010 was 10,000 Bitcoin for two pies. Soon you’ll get two Teslas for one Bitcoin.

Tesla is estimated to have the second-largest corporate collection of Bitcoin. The largest is that of MicroStrategy (NASDAQ:MSTR), a software company that has taking on debt to buy Bitcoin and is up now worth $9 billion, up 150% since 2021 started.

The Index of Fear

The latest rise even has banks like JPMorgan Chase (NYSE:JPM) considering Bitcoin as an inflation hedge.

The argument, from hedge fund managers like Paul Tudor Jones and Stanley Druckmiller, is that central banks are debasing their currency to fight COVID-19 and Bitcoin is a defensive play. Wall Street giants like Goldman Sachs (NYSE:GS) also fear that smaller fintech competitors are getting into Bitcoin and could leave them behind.

One such company is Intercontinental Exchange (NYSE:ICE), parent of the New York Stock Exchange. As I wrote in January, they’re taking a unit called Bakkt public through a SPAC, VPC Impact Acquisition Holdings (NASDQ:VIH). Bakkt plans to roll Bitcoin and other alternative forms of value, like loyalty points, into a single wallet app. Starbucks (NASDAQ:SBUX) and Microsoft (NASDAQ:MSFT) are both involved.

The long game is to have wallets like Bakkt be used for all kinds of transactions, disrupting the credit card industry. Visa (NYSE:V) and Mastercard (NYSE:MA) currently take 3% of transaction volumes to pay for “settlement,” the cost (and risk) of moving money between merchants and consumers after a transaction.

Settlement costs, which exist throughout the financial system, were a big factor in the Gamestop (NYSE:GME) mess at Robinhood. The trading platform was being paid by dealers for its order flow, and settlement income, which allowed it to offer free trading.

While consumer purchasing and stock trading are computerized, they’re not fully automated. You make a transaction, but the money doesn’t move until settlement. The big goal of fintech companies like PayPal (NASDAQ:PYPL) and Square (NYSE:SQ), both of which support Bitcoin, is to use cryptocurrency to move value with the transaction, eliminating settlement. So far in 2021, both PayPal and Square are up about 25%.

The second rise of Bitcoin is less about crypto’s rarity than it is about settlement, an expensive process loaded with technology debt.

However, Bitcoin’s volatility makes it a poor vehicle for solving the problem. You can’t ship a tanker of oil with Bitcoin because you don’t know what it will be worth when it reaches its destination. Real currencies need to be stable to act as a store of value.

The solution would be a “stablecoin,” like the Chinese digital yuan, that can hold its value within an instantly settled transaction. The yuan is now trading at 6.46 to the dollar. It was over 7 less than a year ago.

If the digital yuan takes flight in international trade, that’s when the alarm bells go off. Bitcoin is just the canary in that coal mine and it’s breathing hard.

At the time of publication, Dana Blankenhorn directly owned shares in MSFT. You can learn the value of Bitcoin at coinmarketcap.com.

Dana Blankenhorn has been a financial and technology journalist since 1978. He is the author of Technology’s Big Bang: Yesterday, Today and Tomorrow with Moore’s Law, available at the Amazon Kindle store. Write him at [email protected], tweet him at @danablankenhorn, or subscribe to his Substack newsletter.