Is The $100B Valuation Of Coinbase A Fair Estimate? 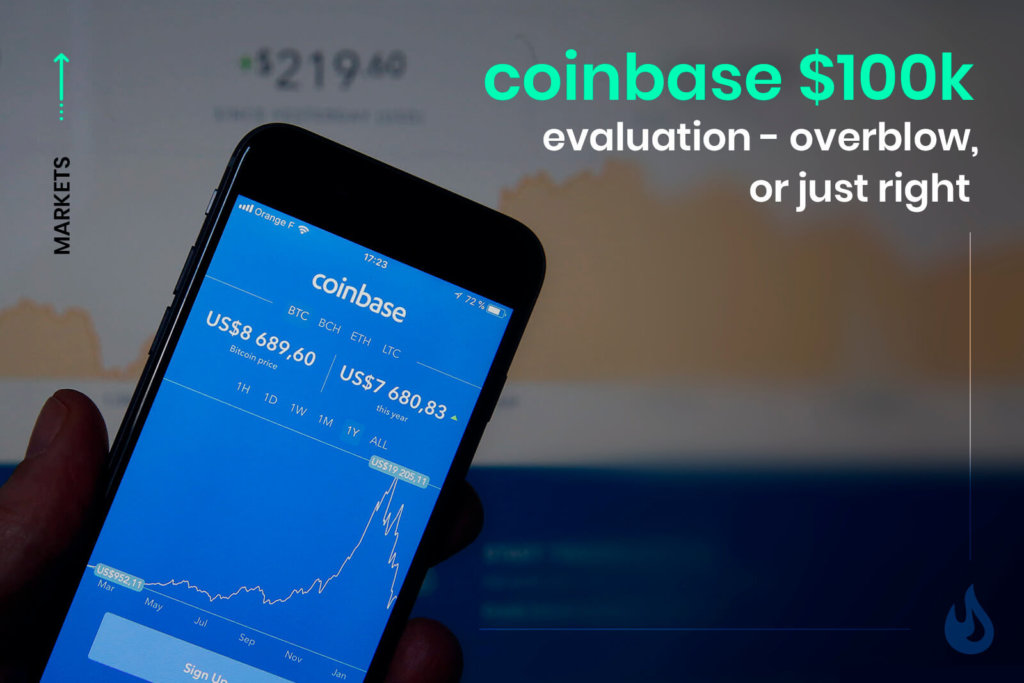 Ahead of its listing as a publicly-traded company, Coinbase has been valued at just over $100 billion after the latest batch of shares sold at $373 each.
Rather than using a traditional IPO, the company will adopt a direct listing method and trade under the ticker, COIN.

Coinbase has grown to become one of the dominant cryptocurrency exchanges in America since it was launched in 2012, now with a user base of over 30 million.

With the direct listing of Coinbase, we’ll experience a firsthand partnership between cryptocurrencies and traditional Wall Street trading. While this drums up excitement and gives credence to cryptocurrencies, investors should take a moment to put things into perspective.

Several arguments support the recent valuation of Coinbase, while analysts believe that it may have been overvalued, imploring investors to trade with caution.

Is Coinbase Worth $100 Billion?

There are strong arguments that confirm Coinbase is indeed worth over $100 billion. The last quarter of 2020 generated over $600 million in revenue for the cryptocurrency exchange; more than the previous three quarters and bringing 2020’s revenue to over $1 billion.

With institutional investors flocking into cryptocurrencies, the value of exchanges is bound to soar even higher. Flowing from the highs of 2020, Tesla’s $1.5 billion investment in Bitcoin sent shockwaves through the cryptocurrency space, setting off a remarkable price rally.

In addition, payments giants like Mastercard, Square, and PayPal have all signaled positive intentions to incorporate cryptocurrencies into their network and Wall Street Banks like BNY Mellon and Morgan Stanley are reportedly lining up investments in cryptocurrencies.

The rise of institutional investors has seen a meteoric increase in Coinbase’s custody and a prime brokerage arm. The exponential increase in the prices and volume traded of cryptocurrency assets such as Bitcoin has also resulted in the high valuation for Coinbase.

$100 Billion, Building Castles In The Air?

Some analysts have warned that Coinbase’s $100 billion valuation is not a true reflection of its value. Decentralized finance (DeFi) poses an ever-present threat to Coinbase.

Direct competition from centralized exchanges in the US cast a shadow of doubt on the $100 billion valuation of Coinbase; BlockFi, Celsius, and Voyager offer next to nothing fees on deposits. In February Gemini launched “Gemini Earn”, a new interest-generating program that offers customers up to 7.4% APY on cryptocurrency deposits.

This level of competition may pose real problems for Coinbase and its investors in the future. In the S-1 form published by the SEC, it was revealed that 96% of Coinbase revenue came from transaction fees on the platform.

This means that while asset prices are rising and volume increases, Coinbase makes a healthy profit but begs the question of what will happen when the market peaks or a bearish trend occurs. For Coinbase, the decision to list during the bullish trend is a smart and sensible move. However, analysts implore investors to move forwards with caution.