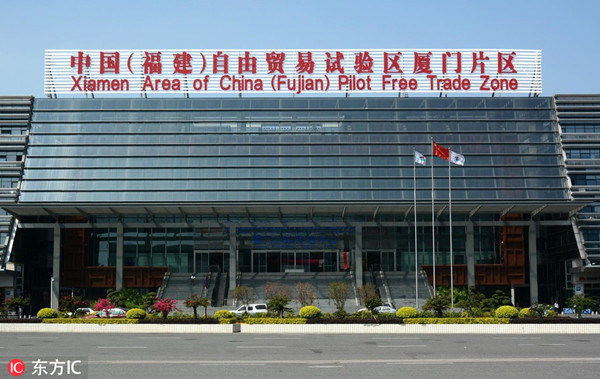 The Fujian FTZ, a test bed for reform and innovation, will give full play to its advantages, adopt an innovative cross-Straits cooperation mechanism, promote the free-flow of goods, services, capital and personnel and enhance the economic connection of Fujian and Taiwan, as well as promote economic ties between Fujian and the economies involved in the Belt and Road Initiative.

"Since it was officially launched in April 2015, the FTZ has conducted bold trials and experiments and implemented 480 innovative measures, 196 of which were pioneered in the zone, and 40 of which were replicated and promoted nationwide," according to Wu Nanxiang, head of the Department of Commerce of Fujian province.

According to the province’s development plan for the 14th Five-Year Plan period (2021-25), Fujian will expand opening-up and cooperation in service sectors such as telecommunication, medical treatment and finance in the zone.

Greater efforts will be made to further relax limits on foreign investment. The plan said that the FTZ will continue to promote opening-up based on the flow of goods and factors of production, and place greater emphasis on opening-up based on rules and related institutions.

The zone will also use its geographic advantage of being near Taiwan and deepen cross-Straits cooperation in the development of industrial, supply, innovation, and value chains, in a bid to forge a cross-Straits common market.

Efforts will also be made to boost high-quality growth through deeper reforms in the zone. The government will work to improve the zone’s economic and trade rules in line with world-class standards, and make new breakthroughs in its functions, policies and institutions.

The FTZ plans to deepen reform and innovation in trade and investment liberalization and facilitation in areas such as investment, trade, finance, transportation and talent.

The provincial government urged the zone to take bold steps to explore new ground in pursuing reform and innovation, make strategic progress in offshore and onshore businesses, and serve as an important area for connecting both domestic and international markets and resources to accelerate the establishment of the new development paradigm to drive high-quality development during the 14th Five-Year Plan period.

The zone should take advantages of its competition policies to cultivate a number of functional platforms and promote the development of new forms and modes of business. Efforts should be made to foster strategic emerging industry, modern services, and future industries, as well accelerate the transformation and upgrading of traditional industries.

The Fujian FTZ will continue its efforts to foster a business environment that is based on market principles, governed by law and up to international standards, the plan said.

The central government will give its FTZs greater power in carrying out reform during the process of establishing a new development paradigm, which has put forward new requirements in regard to the development of FTZs. The Fuzhou Area of the zone will focus on institutional innovation to speed up the high-quality development of its export-oriented economy to make new achievements in building a new development pattern, according to Liang Yong, deputy director of the Administration of Fuzhou Area of China (Fujian) Pilot Free Trade Zone.