The Chairman in Hong Kong Takes No.1 Spot at Asia's 50 Best Restaurants 2021 Awards 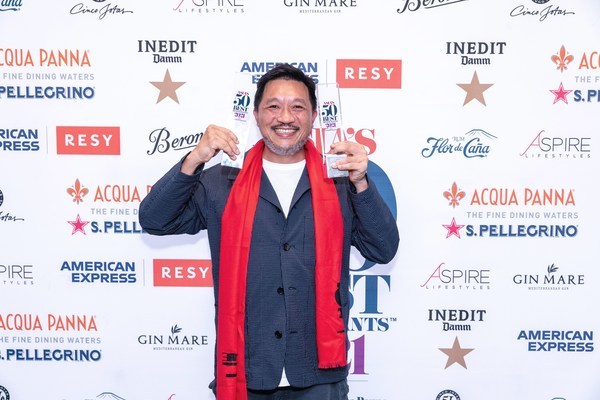 The 2021 list was announced today in a virtual ceremony streamed to a global audience. Now in its ninth edition, the 2021 list boasts 11 first-time entries. Hong Kong claims 11 restaurants on the list, followed by Japan with nine and Singapore with eight.

Hong Kong is also represented by Vea (No.16), this year’s recipient of the Gin Mare Art of Hospitality Award. Mainland China is represented by Fu He Hui (No.22) while Macau’s Wing Lei Palace returns to the No.50 spot on the ranking.

Japan
Den retains its No.3 place to win the title of The Best Restaurant in Japan for a fourth successive year. Climbing 29 places to No.19, Tokyo’s L’Effervescence is the winner of this year’s Beronia Highest Climber Award.

Singapore
After holding the No.1 spot for two consecutive years, Odette moves to No.2, retaining the title of The Best Restaurant in Singapore.

Chef Thitid ‘Ton’ Tassanakajohn has double reason to celebrate. His high-profile Le Du (No.4) is named The Best Restaurant in Thailand for the first time, while his latest venture, Nusara, debuts at No.20.

Taiwan
Mume rises three places to No.15 to hold the title of The Best Restaurant in Taiwan for a third year while Logy, Florilège’s sister restaurant in Taipei, makes a first-time entry at No.24.

Taipei is also home to Asia’s Best Pastry Chef. As pâtissier at Taïrroir, Singapore-born chef Angela Lai is a worthy recipient of the title, having delighted diners with her delicate creations for the last five years.

South Korea
Mingles is named The Best Restaurant in Korea for a sixth consecutive year, while its chef-owner Mingoo Kang earns the Inedit Damm Chefs’ Choice Award. South Korea counts two new entries to the list: 7th Door (No.34) and Born & Bred (No.36).

Indian Accent (No.18) is awarded The Best Restaurant in India, while Masque in Mumbai, the 2020 recipient of the One To Watch Award, makes its debut on the list at No.32.

Entering the ranking at No.39, Anan Saigon secures the title of The Best Restaurant in Vietnam.

William Drew, Director of Content for Asia’s 50 Best Restaurants, says: "In the last year, the restaurant sector has faced extraordinary challenges. We are proud to support the restaurants in their recovery by showcasing the region’s creative talents, celebrating the industry’s pioneers and recognising culinary excellence."

The 2021 list of Asia’s 50 Best Restaurants can be viewed online at  theworlds50best.com/asia/en