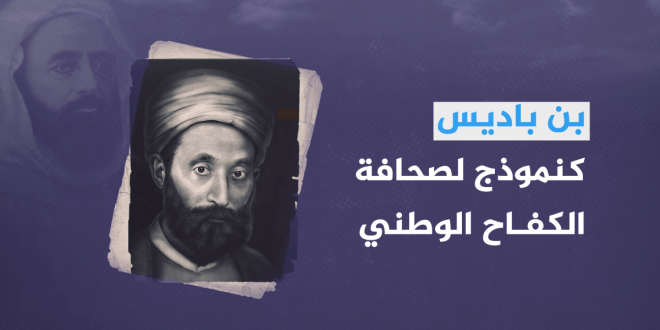 Our history needs researchers who discover the foundations on which the future of the nation can be built. This history is characterized by richness and experiences that can inspire peoples in their struggle, to achieve comprehensive independence and build a knowledge society.

Studying the history of Sheikh Abd al-Hamid bin Badis can make it clear to the nation that it is able – despite all the trials – to wrest its freedom and rights, and that it can – when it has its will – to lead the people and build a new world on the foundations of justice and comprehensive independence.

In this article, I will focus on one aspect only, represented by two questions: How did Sheikh Abd al-Hamid bin Badis develop the model of patriotic struggle journalism? How did he use the press to achieve change and mobilize the Algerian people to revolt against the French occupation?

Sheikh Abdul Hamid bin Badis used the theory of communication through two stages before the world knew it. He turned his scholars into opinion leaders who carry his messages to the masses and explain them to them.

An inspiring “pro” and “brigade” experience

A study of Sheikh Abd al-Hamid bin Badis’s biography shows that he was influenced by the experience of the national struggle journalism in Egypt, and that he was keen to read “Al-Moayad” and “Al-Liwaa” newspapers, but the most influenced newspapers by which he was affected was the magazine “Al-Manar” that was published by Sheikh Muhammad Rashid Reda.

Abdel Hamid Ben Badis was looking forward to publishing newspapers according to that model, as he used to describe the press as a great world, but the French occupation authorities used to prohibit Algerian patriots from publishing newspapers, even though they boasted about the freedom of the press in France, and this illustrates the double standards used by France, It is aware of the danger of the Algerian national forces using the press to educate and mobilize the people.

But Abdel Hamid Ben Badis faced that challenge by preparing the educated. Where he established schools, and succeeded in preparing more than a thousand scientists, then directed them to spread in Algerian cities and villages.

This shows that Sheikh Abdul Hamid bin Badis used the theory of communication through two stages, before the world knew it. He transformed his scholars into opinion leaders who carry his messages to the masses and explain them to them.

This illustrates the importance of linking media and education in building knowledge societies, and in the struggle to achieve comprehensive independence that is based on culture, thought and science.

But how did Abdelhamid Ben Badis face the restrictions imposed by the French occupation authorities on the press?

Abdel Hamid bin Badis’ newspapers were suffering from weakness in printing and editing methods, but they nonetheless had a great impact beyond their distribution, as they were the source on which opinion leaders of scholars relied on their messages that they conveyed to the masses using direct communication.

The most important characteristic of the national struggle journalism is that it fights its constant battle for freedom, and that it realizes that the colonial powers reject their existence, so it works continuously in the face of restrictions, and the experience of Sheikh Abdul Hamid bin Badis was an inspiration to all the free people, so he could not confront a journalist. Restrictions such as those he faced, but clearly stated his target; It is the return of Algeria to its Arab and Islamic identity, so that this would be a necessary prelude to the revolution against the French occupation, and he knows very well that the occupation authorities will close his newspapers and punish the journalists who work in them, and he has prepared for that, so when the occupation closes one newspaper, he is preparing to publish another newspaper.

Thus, Sheikh Abdul Hamid bin Badis presented a lesson to all free journalists, an inspiring experience characterized by wealth, and a conscious link between journalism and education, and showed that the press of the national struggle works in all circumstances, regardless of the harsh reality, and that the value and importance of this press stems from its ability to confront, challenge, influence and struggle Continuous to achieve goals.

The national struggle press – as the experience of Abdel Hamid bin Badis shows – must rely on its own resources in order to maintain its independence and be able to achieve its goals and face challenges, and it works with the least potential, so its ability to influence lies in the content that expresses the people’s hopes and pain, and responds For his longing for freedom, independence and pride in the Arab-Islamic identity.

Therefore, Sheikh Abdel Hamid directed his students to establish printing presses in several cities, the most important of which are Algiers, Constantine, and Tlemcen.

After the end of the First World War, the Sheikh and his students worked to publish newspapers, and the first successful attempt was the “An-Najah” newspaper, which was published in July 1925, but the occupation authorities closed it.

Subsequently, Abdul Hamid directed his students to publish many newspapers, the most important of which were “Al-Shehab,” “Al-Islah,” “Al-Insa`ir,” and “Al-Mundkayed.”

As it applies to Egyptian newspapers (Al-Muayyad and Al-Lewa) at the beginning of the twentieth century, Abd al-Hamid ibn Badis’s newspapers suffered from weakness in printing and editing methods, but nevertheless they had a great influence beyond the area of ​​their distribution, as they were the source on which opinion leaders of scholars relied Their messages they conveyed to the masses using direct communication.

Just as educated people in rural Egypt were reading Mustafa Kamel’s articles to farmers, so the Algerian scholars were among the students of Sheikh Abdel Hamid who read his articles that were published in those newspapers in their lessons in mosques or gatherings, thus enabling these scholars to build a public space in which ideas and knowledge could be exchanged.

Journalism of the “Nahdlatul Ulama” Association

The establishment of the “Nahdlatul Ulama” association marked the beginning of an important stage in the history of Algeria and the building of an inspiring experience for all peoples in the struggle for comprehensive independence.

The scholars presented their project by establishing their association, and the Algerian people were angry as a result of the celebrations held by France in 1930 to mark the 100th anniversary of its occupation of Algeria, in addition to the speech of the French leaders and their saying that Algeria is part of France.

Therefore, the Algerians received the project to establish the Association “Nahdhat al-Ulama” with love, and attached many hopes to it to unify the people, and Sheikh Abdel Hamid realized this, so he went to publish newspapers that express the association, and among the most important of these newspapers were “The Sunnah of Muhammadiyah” and “the purified Sharia.” And the “Right Path” and “Insights.”

Sheikh Abd al-Hamid had developed his capabilities to face the restrictions imposed on the freedom of the press, and on the French authorities closing his newspapers. So when these authorities shut down a newspaper, he instructed his pupils to create a new newspaper.

One of the most important achievements of Sheikh Abd al-Hamid bin Badis’s press is that it carried messages of hope to the Algerian people, assuring them that they are able to struggle and wrest their freedom and independence.

Therefore, his choice of the names of his newspapers carried many important meanings for the Algerian people, for “Shehab” is a name that carries the meaning of the light that clarifies the road to independence, and Sheikh Abdel Hamid was able to make the “Shehab” inspire all the peoples of the Arab Maghreb and influence public opinion in all its areas. And illuminates the nation on the path of independence and freedom.

The French occupation alerted that, and closed these newspapers, but Ibn Badis had been able to strongly influence the people of Algeria, and that is why the Association “Nahdlatul Ulama” was able to withstand all challenges, and the experience of Ibn Badis’s students in the struggle and leadership of the people matured and spread the principles of Islam And to stir up pride in him and Arabism.

The French writer Marcel Emeret admitted that the Nahdlatul Ulama Association was able – within 10 years only by using newspapers – to lay the foundations for the Arab renaissance, and set the ideal goals for a decent life or the attainment of the virtue of martyrdom.

Thus, the newspapers of the “Nahdet al-Ulama” association were able to lay the foundations for the Algerian revolution in 1954, and the Egyptian National Struggle newspapers (Al-Moayad and Al-Lewa) were able to prepare the ground for the 1919 revolution.

One of the most important achievements of the national struggle journalism – as shown by the study of the Egyptian and Algerian experience – was that this press was able to drop the strategy of intimidation used by the colonial authorities. Goals seem impossible in a reality in which colonial powers possess brute force and use it cruelly against peoples.

The “Nahdlatul Ulama” association smashed the fear of French cannons and their bombs in the hearts of Algerians, and this was one of the most important achievements of the national struggle journalism.

The words of Sheikh Abdel Hamid Ben Badis inspired the people of Algeria, as his speech was characterized by strength, and the peoples needed that speech to achieve the grand goals. Weak speech drives peoples to submission, submission, fear and concern for life no matter how humiliating it is.

Therefore, studying the journalism of Sheikh Abdul Hamid and “Nahdhat Al Ulama” can clarify for us the ummah’s need for strong scholars who explain to it the principles of Islam and lead it to cherish its identity and make sacrifices in order to achieve great goals.

An examination of the experiences of national struggle journalism can also show us that restrictions, however severe they are, will not prevent free journalists and powerful scholars from lighting the way for the nation and mobilizing it to achieve comprehensive independence.

Therefore, the people of Algeria went to bid farewell to their sheikh and leader Abdelhamid Bin Badis, then continued the path of struggle and resistance, and challenged France’s brute strength, and offered more than a million martyrs to seize their freedom and independence.

But can we repeat the experience and revive the model of patriotic struggle journalism?