Indonesia’s fintech industry is one of the most competitive and dynamic in ASEAN as evidenced by the emergence of four unicorns and one decacorn in the industry. The country is home to 20 percent of all fintech companies in the Southeast Asian bloc, which is expected to generate US$8.6 billion in revenues over the next five years, despite its infancy.

The fintech industry is one of the most funded sectors — along with e-commerce — and is dominated by peer-to-peer (P2P) lending (50 percent) and e-payment (23 percent) platforms. Despite having more than 300 fintech companies operating in Indonesia, foreign investors will find the industry has yet to fulfill its potential. One of the factors is that 60 percent of the country’s workforce is in the informal sector, and many micro, small, and medium-sized enterprises (MSMEs) have little access to financing from banks, as they too are mostly operating in the informal sector. 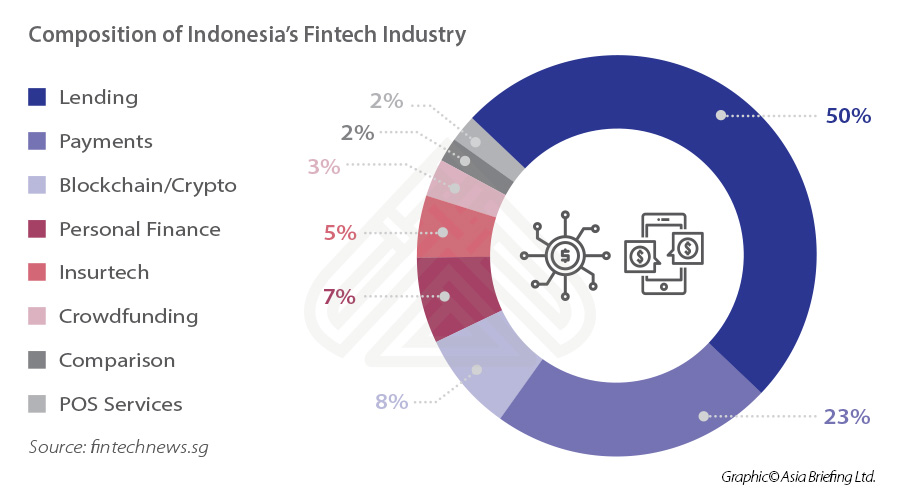 Many local MSMEs have business models that are not compatible with the characteristics of the banks’ financial products. That includes aspects such as payment terms for loan schemes, forms of collateral, and credit quality, among others.

Foreign fintech firms can plug this gap through new financing models that have the potential to serve Indonesia’s 47 million underbanked and 92 million unbanked adults. As of 2020, P2P lending reached US$7.7 billion from 160 fintech companies officially listed by the Financial Services Authority (OJK). This covered over 26 million borrowers throughout the country.

These microloans are popular because of their convenience as it normally takes just 24 hours for the funds to be disbursed, and the terms and maturity are small and short – with borrowers typically receiving not more than US$100. These are normally returned within a few weeks as there are often huge interest charges.

Electronic money transactions rose by 173 percent in 2020 and have become indispensable to Indonesian consumers. The country is predicted to be the next battleground for digital payment apps, with Indonesia possessing many of the key characteristics that are critical for the adoption of digital payment systems.

Some 196 million people have access to the internet and the smartphone penetration rate is 60 percent; above the ASEAN region’s 51 percent. Moreover, the middle-class now comprises 20 percent of the population, a key segment in the growth of the digital economy.

Local players still dominate the market (over 30), and GoPay, OVO, Dana, and LinkAja are some of the frontrunners in the industry. 58 percent of consumers used GoPay, an e-wallet developed by local decacorn Gojek. The company partnered with Bank Jago to develop its e-wallet services, which saw gross transactional value of US$12 billion in 2020. GoJek raised US$1.2 billion in funds to take on its rival Grab. It is also currently in talks with local e-commerce giant Tokopedia in a possible US$18 billion merger.

Grab also has ambitious plans for Indonesia and the region. It owns shares in the Indonesian digital payment platform OVO and is used in more than 115 million devices in over 300 cities. OVO has plans to merge with another local digital payment platform, DANA, which is backed by Ant Financial. If completed, the deal would help Grab in its battle for market share with Gojek.

Since it loosened investment rules in 2016, foreign investors from SoftBank to Alibaba have entered Indonesia’s domestic market and are competing with local firms like Tokopedia, thus providing consumers with a wider variety of services at competitive prices.

For foreign investors in the e-wallet industry, it is essential that they deliver a customer-centric experience to allow customers to pay with the local payment method of their choice, ranging from mobile banking to payments via convenience stores. This is because while Indonesia has a high smartphone penetration rate, a sizeable portion of its population is unbanked.

Indonesia is embracing cloud technology at speed and scale and has attracted investments from the world’s largest tech companies. In a report compiled by the Boston Consulting Group, Indonesia’s public cloud market is projected to see a compound annual growth rate of 25 percent — to reach US$800 million by 2023. The growing number of digital natives and the expansion of digital unicorns is fast turning Indonesia into one of Asia-Pacific’s fastest-growing public cloud markets.

Alibaba gained a first-mover advantage over rivals Google, Amazon Web Services (AWS), and Microsoft, has launched its second hyperscale data center in January 2019. Google Cloud was launched in Jakarta in June 2020, and AWS will invest US$2.85 billion to build data centers in Indonesia’s West Java province by end of 2021. Microsoft revealed plans in early February 2020 that it would also build data centers in the country.

The management of big data will be key to maximizing the future of Indonesia’s cloud technology industry. Big data will be of great importance in understanding consumer trends in the country, particularly in recording digital footprints through social media platforms. Many MSMEs are using Facebook and Instagram to reach their consumer base. These platforms have 140 million and 77 million users, respectively, as of 2020. It is estimated that the total number of social network users will reach 256 million by 2025.

ASEAN Briefing is produced by Dezan Shira & Associates. The firm assists foreign investors throughout Asia and maintains offices throughout ASEAN, including in Singapore, Hanoi, Ho Chi Minh City, and Da Nang in Vietnam, Munich, and Esen in Germany, Boston, and Salt Lake City in the United States, Milan, Conegliano, and Udine in Italy, in addition to Jakarta, and Batam in Indonesia. We also have partner firms in Malaysia, Bangladesh, the Philippines, and Thailand as well as our practices in China and India. Please contact us at [email protected] or visit our website at www.dezshira.com.