SHANGHAI, April 8, 2021 /PRNewswire/ — IM Motors, the first in the world to innovate a Customer Share Option Plan (CSOP), disclosed its core operation link a few days ago. Furthermore, it published two mining modes for digital assets known as "gemstones". These revelations push the company to the forefront in establishing the industry benchmark for user data value right confirmation.


With 4.9% of equity income from the initial round of investment as an endorsement, IM Motors issued 300 million gemstones to reflect the income and dividend of the assets corresponding to the equity. The company also applied a series of cutting-edge technologies, including blockchain, to reward users by providing data rights and interest, thus recognizing their contributions and value.

As confirmed through this press release provided by IM Motors, car users will obtain gemstones through processes known as "kilometer-based mining" and "formative mining". They may exchange gemstones for hardware or software upgrades, or even financial and insurance products. At the same time, users will be able to enjoy sizeable dividends as the company’s value appreciates.

"Kilometer-based mining" refers to the process in which car users obtain  gemstones based on "vehicle and driving behavior data" that is authorized for use by the users. Gemstones obtained this way account for about 70% of the total number of gemstones. In other words, from the moment that users begin driving a vehicle from IM Motors, the kilometer-based mining mode will already be enabled. As the car is being driven, gemstones will be accumulated at a set rate based on blockchain technology.

By contrast, the path is rather long to gain gemstones via "formative mining"; however, this method provides users with a social experience that is richer, more captivating, and more extensive. The gemstones obtained through this approach account for about 30% of the total. In the future, users will win "crystals" after completing various interactive tasks on the APP. After accumulating a certain amount of crystals, they will then be able to extract prizes from the IM Motors Mine Box. The Mine Box functions similarly to popular "blind boxes" from which "treasures" may fall out randomly, which in this case includes a variety of user rights and benefits. Both car owners and non-owners have the opportunity to extract prizes from the Mine Box, but only car owners are eligible to extract gemstones, as they reflect equity income.

It should be noted that the production rule of gemstones acquired based on kilometers driven will follow a principle of being halved every four years. Thus, early users will have a greater chance of obtaining gemstones in larger quantities through car driving in the form of kilometer-based mining. In addition, such gemstones are connected with the user’s account and never expire. 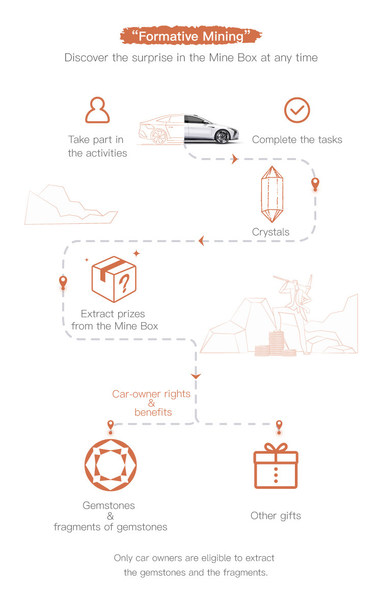 The two mining modes confirm driving data as the most valuable, while formative data is not to be overlooked

Prior to CSOP, there was no precedent for introducing blockchain technology into the user data value confirmation in the global automobile industry. The gemstone mining method proposed in the plan and its corresponding data categories are actually the first to clarify the boundary of company value growth driven by user data in the industry. Across all user data categories, users’ daily driving data and brand co-creation data possess the most potential for growth.