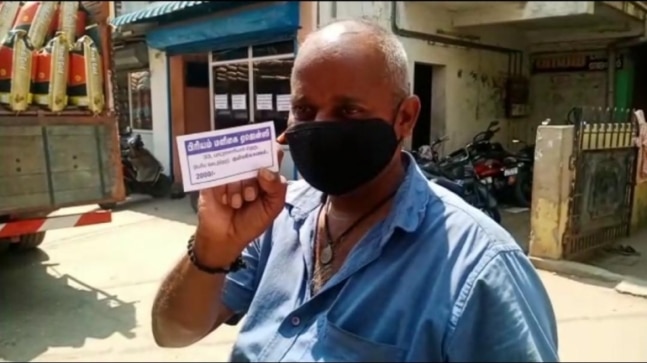 A person was in for a shock after several voters thronged his shop hoping to encash tokens worth Rs 2,000 issued to them allegedly by a local candidate in Tamil Nadu’s Kumbakonam.

Sheik Muhammad, who runs a shop that sells household items at Batrachariyar road in Kumbakonam, had to down the shutters temporarily as the number of people carrying the tokens surged.

On Wednesday, Sheik Muhammad had several visitors carrying a peice of token with his shop’s name and address printed on it. Sheik Muhammad said he had never given out any such coupon to avail products at his store.

It was later found that the team of a candidate, who was contesting from Kumbakonam constituency, had given out the tokens in “exchange for votes”.

He even had to stick posters on his shop explaining that he had nothing to do with the “tokens in exchange for votes or products”.

“Someone has given a Rs 2,000 token and sent people to my shop. When I told them to collecy the money from the person who gave the token, they walked away. I had to even stick a poster on my shop saying that I had nothing to do with the token,” Sheik Muhammad said.