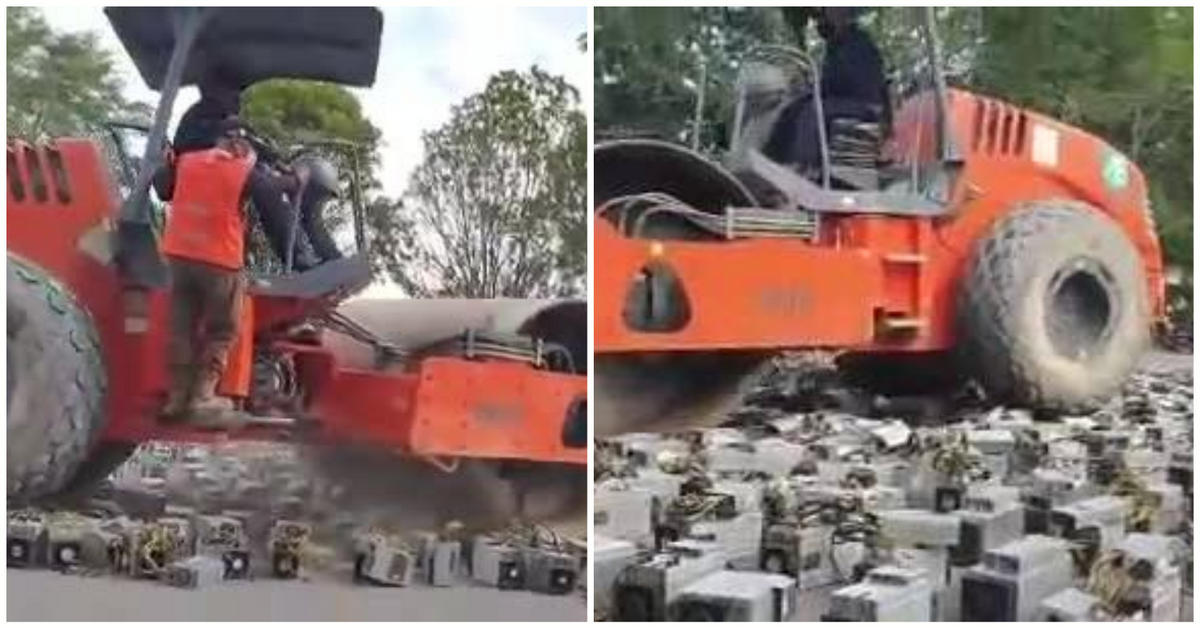 It’s not every day that one hears of people crushing Bitcoin machines, some would even pass that as a joke, but then reality can be funny. Malaysia police destroyed more than 1,000 Bitcoin mining machines using a steamroller. The machines were confiscated over alleged theft of electricity, which was used to mine Bitcoin. This raises the question- what could have led to the destruction of these money-making devices? The video that shows a steamroller crushing hundreds of Bitcoin ASIC miners on the ground first started to circulate among the Chinese crypto community on WeChat on Friday morning local time. The video went viral (as expected), and the world wanted to know who is pulling off this expensive stunt. Not China or America; it turned out to be Malaysia.

The video clip went viral on Twitter owing to the significant number of Bitcoin mining equipment. The police in the city of Miri on the island of Borneo and the Sarawak Energy company arranged for a steamroller to run over 1,069 Bitcoin (BTC) miners. The rigs were reportedly confiscated from residents of Malaysia attempting to illegally mine the cryptocurrency using stolen electricity between February and April. This is not the first time authorities have taken a stringent step. They said three houses in the area had been destroyed this year due to illegal Bitcoin mining, while the Sarawak Energy company lost a whopping $2 million from the operations.

Some people wonder why the Malaysian authorities outright destroyed the equipment instead of reaping some value from the parts. It could be due to disparaging news supported by multiple reports that operators in Malaysia have been stealing electricity to mine Bitcoin secretly. Based on the latest Bitcoin mining map compiled by the Cambridge Center for Alternative Finance, Malaysia accounted for about four percent of Bitcoin’s total network hash rate as of April this year. In similar news, $1.2 million worth of ‘contraband’ Bentley and McLaren supercars are bulldozed and crushed by the Philippines Bureau of Customs.

[Thanks for the tip Juan]