Strong earnings results from corporates that outperform during economic expansion helped US futures on the , , and and European stocks rebound on Tuesday after Monday’s selloff.

The dollar was also trading in the green even as gold and silver were rising.

After a rout yesterday during which investors focused on and the spreading Delta variant of COVID-19, while disregarding dovish Fed rhetoric as well as strong earnings, investors, it seems, dug deep and have found new faith in the recovery.

We on Sunday that investors were consistent over the weekend and decided to pay attention to actual data and disregard the promise of continued stimulus—perhaps for the first time in a very long while. We were surprised they hadn’t considered positive earnings as an optimistic signal and posited they might be concerned that rising inflation and the spread of the coronavirus would undo previous corporate profitability.

It seems, however, that investors have now returned to their old ways and are not willing to remain on the sidelines of what they consider an ongoing rally, irrespective of the economy.

Futures today demonstrate that the reflation trade is back. Contracts on the Russell 2000—whose listed domestic firms suffered the most during COVID-19 restrictions and therefore arguably provide the most value for a restarting economy—were outperforming, while NASDAQ 100 contracts, mega cap tech firms that profited the most during lockdowns and are therefore overvalued, lagged.

The Index ended a four-day selloff, rising on Tuesday with commodity producers, which usually perform well amid a growing economy.

UBS Group (SIX:), trading on the Swiss stock exchange, surged 4.6% after posting better-than-expected as it benefited from a jump in new assets and fee income, although the stock slipped back as management warned it foresees reduced client activity.

Switzerland’s largest bank is popular today, but underlying technical forces suggest bulls will have to prove themselves. 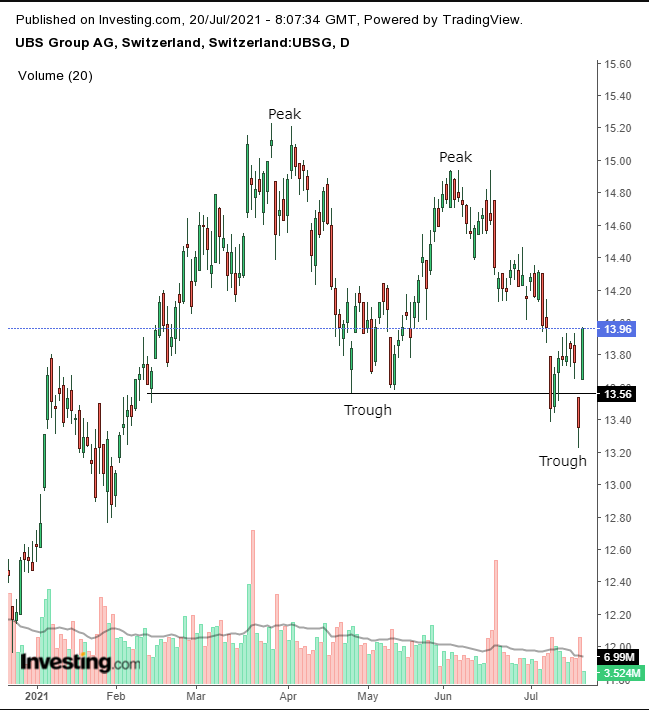 While the stock jumped back above the neckline of a top, it did so with muted volume, while previous down-days had spiking volumes. As of now, the stock is trading within a peak-and-trough downtrend.

Volvo’s (ST:) second quarter slightly missed expectations. The Stockholm-based car maker’s output has been disrupted due to the global chip shortage. The stock sold off as much as 4.7% and settled 3.2% lower, as of the time of writing. 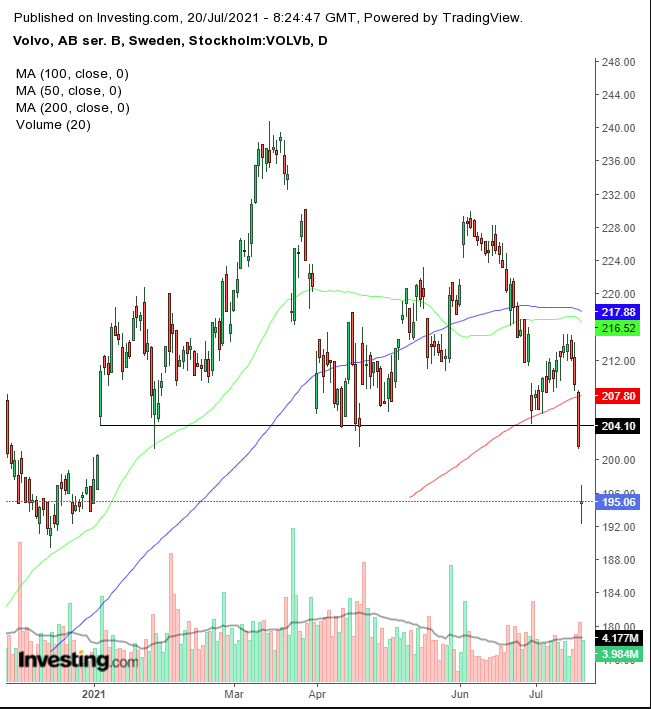 Concerns that the Delta variant of COVID-19 will disrupt the economic rebound—which global central banks have been carefully nurturing—were still dominant in the Asian session. Japan is feeling the effects of the resurgence of the virus as the Olympic games in Tokyo are set to start on Friday. Only 22% of the population there are fully vaccinated, possibly one of the reasons for the spread.

Japan’s underperformed the major regional benchmarks, falling 1%. On the other side of the vaccine rollout-spectrum, China, which has been vaccinating 20 million people a day and has vaccinated more than half its population, saw its outperform, down less than 0.1% .

US stocks slumped during Monday’s Wall Street session, led by economically sensitive sectors. The two indexes associated with value stocks, the (-1.8%) and the (-2.1%) underperformed, while the tech heavy- beat its peers, falling just 1%.

The Index declined 1.6%, with the reflation trade in full retreat. slumped 3.5%, following a strong selloff in oil prices after an OPEC+ agreement to boost output. weren’t far behind, with a 2.8% drop. In third place, , with a 2.10% selloff. slid 1.4%, demonstrating that investors were holding on to tech shares relative to cyclicals.

Yields on the Treasury note rebounded from daily lows after investors . Rates found support at the bottom of their recent, steeper, falling channel, increasing the likelihood of a return-move to a rising flag, whose bearishness was compounded by its breakout crossing below the 200 DMA, after the 50 DMA recently crossed below the 100 DMA. 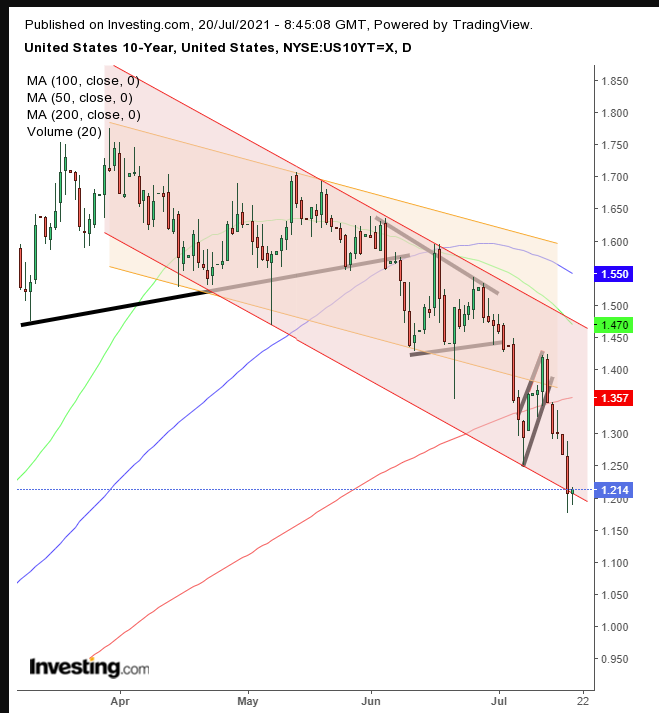 In other words, we could expect yields to rise amid a Treasury take-profit selloff, though as long as the falling channel holds, we anticipate a continued downtrend for yields, boosted by a resumed rally in Treasuries—all of which is generally considered bearish for stocks.

The rebound in yields pulled the from its session highs.

The USD will likely find resistance below the Mar. 31 highs, but if bulls manage to post a new high, we’ll have a large double-bottom on our hands.

Despite the dollar losing steam, failed to hold onto gains. 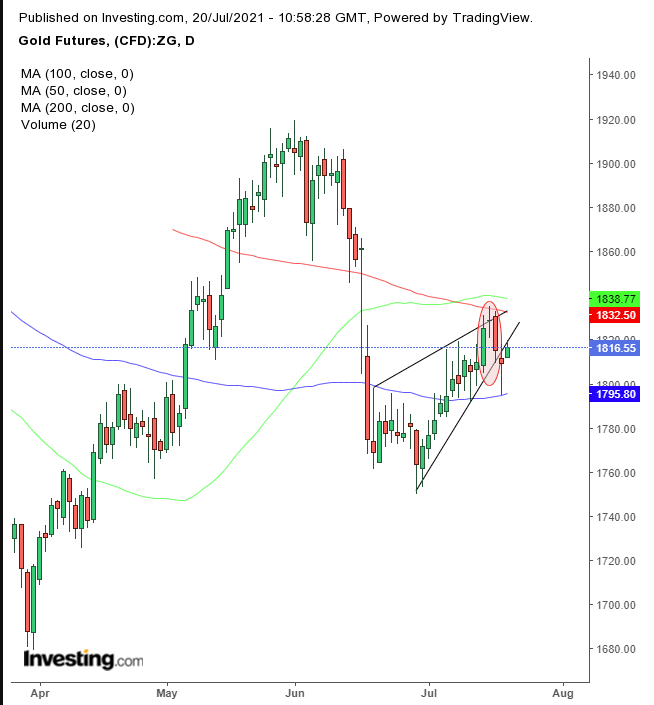 The yellow metal had found resistance by the underside of a bearish wedge, following an Evening Star that developed after a Death Cross.

fell below the psychological key $30,000 level despite its proponents considering it a haven asset amid the increasing concern about the Delta strain of COVID-19, a day after a video showing Malaysian police destroying over 1,000 mining rigs went viral. 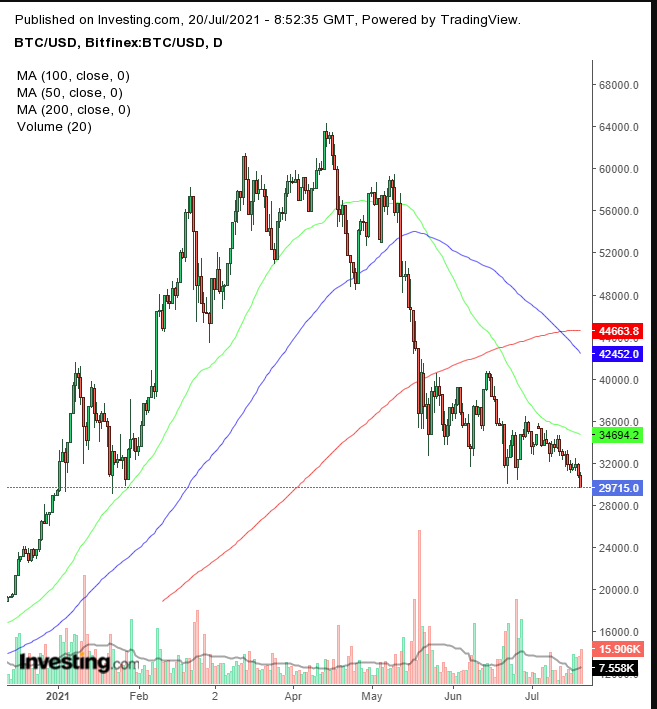 The cryptocurrency traded at the lowest since Jan. 1, as red days are hit with spikes in volume, following a Death Cross less than a month ago.

failed to come back, having dropped to an 8-week low after yesterday’s broad market rout. The selloff was exacerbated by OPEC’s elevated output targets. There are about future demand as the Delta variant continues to spread across the globe.

WTI found support at the apex of a symmetrical triangle, reinforced by the 100 DMA, whose implied target has already been reached. Given, that most of the small H&S top has also been realized, this would be an ideal long position for contrarian dip buyers. Most other traders, however, would be cautious, as the price fell below its uptrend line.