Bitcoin, Ethereum, Tether: A Look at Top Cryptocurrencies and Their Worth 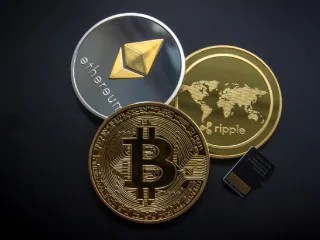 Cryptocurrency, a form of digital asset that is based on the idea of distributed ownership, is the newest craze in town. Investors see in it the possibility of a good return and consider it a store of value. There have been several digital coins in circulation for almost a decade but a rapid rise in their value earlier this year made them a popular investment destination now. The market crashed soon after, giving those on the fence an opportunity to buy the dip and get involved with what some have called the world’s “future currency.”

Can cryptocurrencies become the future currency of the world? There’s some uncertainty. Firstly, they are highly volatile. Secondly, they still lack regulation and government backing in most countries. Despite these issues, the crypto market is thriving, and more coins are being added to the vault. According to market research firm CoinMarketCap, there are more than 1,000 types of crypto coins in circulation today.

What are the most popular cryptocurrencies?

Bitcoin is the world’s oldest and the most popular digital coin. It was launched in 2009 by an anonymous person (or group of persons) under the pseudonym “Satoshi Nakamoto.” On June 1, Bitcoin was trading at Rs. 26,40,420; on July 30, the price closed at Rs. 29,13,645. Bitcoin’s current market capitalisation is Rs. 58.3 trillion.

Ethereum is currently ranked second. Ether is the main token of the Ethereum blockchain. It was first described in 2013 by Russian-Canadian programmer Vitalik Buterin in a white paper. Later, Buterin, along with other co-founders, crowdfunded the project via an online sale next year. They officially launched the blockchain in July 2015. On June 1, Ethereum closed at a price of Rs. 1,87,286; on July 30, it was trading at Rs. 1,74,817. The current market cap is Rs. 21.3 trillion.

The largest digital coin by market value, Tether is what’s known as a stablecoin. Unlike most cryptocurrencies, these coins are tied to real-world assets to maintain a stable value. Tether was designed to be pegged to the US dollar for stability, but the firm has revealed it does not have enough dollar reserves to maintain stability. In the last 15 days, Tether’s price has dipped from Rs. 74.61 to Rs. 74.41. Its market cap is Rs. 4.6 trillion.

Founded in 2017 by Ethereum co-founder Charles Hoskinson, Cardano is a proof-of-stake (PoS) blockchain platform. Under the PoS model, owners put up their tokens as collateral to get authority over the token in proportion to the amount they stake. Cardano traded at Rs. 90.24 on July 16. And by July 30, it had reached a value of Rs. 94.62. The current market cap is Rs. 3.1 trillion.

Ripple, a US-based technology company, created the XRP digital coin in 2012 to be a quick, cost-efficient, and more scalable alternative to digital assets and existing monetary payment platforms like SWIFT. You can buy XRP on any digital currency exchange and store them in a hot or cold wallet. Its price has jumped from Rs. 44.81 on July 16 to Rs. 54.61 on July 30. Its market cap is Rs. 2.6 trillion.

Launched as a meme-based currency to poke fun at Bitcoin, Dogecoin became so popular with people recently that it has taken on a life of its own. Based on the popular “doge” meme, it features the Shiba Inu face on its logo. Software engineers Billy Markus and Jackson Palmer launched the digital coin in 2013. After remaining in oblivion for almost seven years, billionaire entrepreneur Elon Musk endorsed it and began pushing it on his social media handle. On July 16, it traded for Rs. 13.35 but had gained some value to reach Rs. 15.71 by July 30. Its price has seen ups and downs throughout it journey. The market cap is Rs. 2 trillion.

Interested in cryptocurrency? We discuss all things crypto with WazirX CEO Nischal Shetty and WeekendInvesting founder Alok Jain on Orbital, the Gadgets 360 podcast. Orbital is available on Apple Podcasts, Google Podcasts, Spotify, Amazon Music and wherever you get your podcasts.
Affiliate links may be automatically generated – see our ethics statement for details.