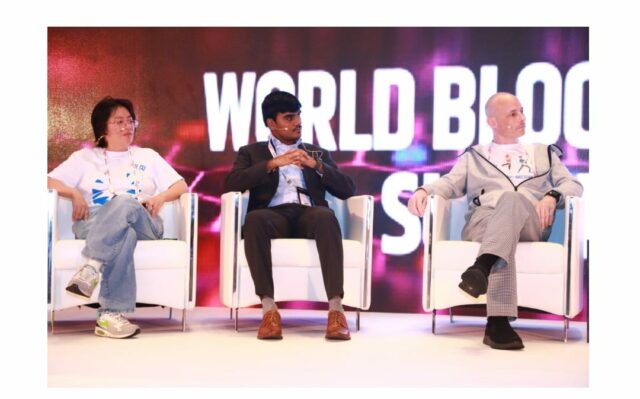 “Just like the same any product to be developed or serviced we are very choosy in terms of functionalities and work possibilities, but for us, just being goal-oriented is our success story” coined the visionary CEO of Chakravuyha, Sai Teja Annareddy during the development of Virtual Arena. Being a pioneer in the field of blockchain, Sai had inculcated a great prospect through his vision. Blockchain could hold transactional data on the internet through the blockchain server. In the current era, data is stored in the server in a way that there is much security threat over the storage. Other than this, the data center has various other drawbacks that were to be considered. Data privacy, security, financial liability was some of the major drawbacks. But when it comes to the Blockchain it overcomes all the conventional ways.

“Leveraging Blockchain, enterprises can increase the utilization rate of cash flows, and greatly improve the efficiency of value transmission to support more business development. Though we still need to wait for real internet-based sovereignty,” said Sai Tej Annareddy. Through the blockchain, he anticipated bringing on digital transformation in the industry. Through his ideologies, Chakravuyha was born a company based in Hyderabad, India. It had a primary objective to build a platform with Data availability and transparency. Sai being the brain behind the company not only focused on the product availability but also the research of the product. With the sturdy development, Sai and the team brought up various approaches to bring out the maximum output from minimal inputs. Chakravuyha leveraged the power of blockchain, to deal with huge network traffic and provided the convenience of full ownerships to the stakeholders of the data. The technologist mind of the founder, helped various other enterprises to reach their threshold. Under the umbrella of Chakravuyha, entities like Coinlancer, Femenergy, and a next-generation live-streaming app called Virtual Arena have tasted their success.

Sai Tej had multiple achievements under his list. During the development of the virtual arena, Sai and the team did extensive research and brainstorming before coming up with the concept. Through this, the Virtual Arena had unique compatibilities and revenue possibilities, unlike the conventional live-streaming applications. The terms that he and his team considered themselves to be selective in terms of what is offered to the client. Their success story is defined by their goal-oriented behaviour. Sai started Chakravuyha as a simple technological service providing company but with his advanced thinking and vision, the company was much more. He built the Company as a pioneer to one of its kind, the blockchain service provider with a higher success ratio. He inculcated the implementations of Machine Learning and Artificial Intelligence in his company which further accelerated the growth ratio.

Sai’s expertise as an entrepreneur with a zeal for blockchain has elevated him to the ranks of exceptional blockchain expert. His significant managerial and business abilities, along with his understanding of blockchain technology, have led him to be the founder of Chakravuyha. He is a critical thinker who sees things through the eyes of the client and solves problems with their help. Sai investigates the pain spots and devises solutions by developing, growing, and optimizing the application of business harmony and blockchain technology solutions into every project undertaken, ensuring that it is developed by the best, for the best. During his ongoing journey, Sai felt that the crypto space is unfilled and need to have efficient accessibility. He always believed to be ahead in the technological space. A new concept for a cryptocurrency application was evolved through his ideologies. An application that relied on simplified, secure and faster crypto transactions. This concept would be a revolution in the financial technology space for cryptocurrency. Through this application, it will allow users to obtain simplified and convenient transactions. Whether it be physical or digital, you can do anything.

Sai’s visionary platform would be one of its kind, as it will combine the crypto digital finances under one roof. It will offer multiple features such as buying, selling, staking cryptocurrency. Not only this but it will create hassle-free domestic and cross-border transactions. The proposed user interfaces will also be one of a kind and user-friendly. He aimed to create a secured ecosystem in its application by integrating with market leaders. The growing cryptocurrency adaptation requires a convenient system for the day-to-day transaction of cryptos. Through the visionary mind of Sai Tej Annareddy, a cryptocurrency application would be a showstopper in the future.