Cryptos Could Be a ‘Speculative Mania,’ Economist Eswar Prasad Says 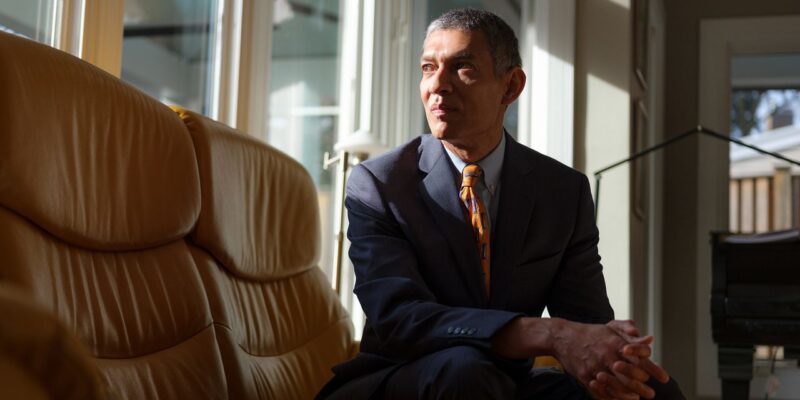 Discussions with central bankers at a conference a couple of years ago prompted economist Eswar Prasad to start writing what he anticipated would be a slim volume on how digital currencies could affect monetary-policy implementation. As he delved deeper into the world of digital technologies such as blockchain, cryptocurrencies, and stablecoins, however, he began to realize their potential to revolutionize, and potentially destabilize, financial markets and the international monetary system.

So much for the slim volume. Instead, Prasad wrote the The Future of Money: How the Digital Revolution Is Transforming Currencies and Finance, a 500-page book that has become a road map for money managers, market strategists, and others seeking to understand this new world. With a background in global trade, monetary policy, and financial regulation, including a stint as the International Monetary Fund’s top hand on China, Prasad has spent his career studying the global economic landscape. Currently an economics professor at Cornell University and a senior fellow at the Brookings Institution, he recently spoke with Barron’s about the “speculative mania” surrounding


Bitcoin
and the opportunities and risks inherent in moving away from traditional forms of money and finance. An edited version of our conversation follows.

Barron’s: China appears to have the lead in launching a digital currency. Does that put the US at a disadvantage and threaten the dollar’s reserve status?

Eswar Prasad:I don’t see a digital yuan posing a big threat to the US dollar. I don’t think it’s a huge first-mover advantage, nor does it mean China will set the standard for the world. The traditional use case for a central bank digital currency, or CBDC—to increase financial inclusion—is weak in China because AliPay and WeChat Pay [payment apps owned, respectively, by

Tencent Holdings
(700.Hong Kong)] do a fantastic job of providing digital payments. China’s motivation for the digital yuan is different. [China] is concerned about the dominance of these two payment providers limiting innovation, but also making them economically and politically too powerful for Beijing’s comfort.

As we move toward a world [of digital currencies] where China’s cross-border interbank payment system can communicate more effectively with other countries’ systems, we can see less need for the US dollar as a currency in international trade. As a payment currency, the US dollar could lose some of its prominence, although it will remain the dominant currency. But a reserve currency needs not just economic size and financial power but also an institutional framework—an independent central bank, rule of law, an institutional system of checks and balances—that maintains the trust of foreign investors. China has made it clear it’s not going to undertake any significant institutional reforms. Even if the renminbi were to get a little more traction, I don’t see the renminbi seriously threatening the dollar.

How will digital currencies reshape financial markets and central banking?

We are at the threshold of some big changes in domestic and international financial markets. The digital transformation has made it much easier to provide innovation in new products and services at scale, and make them widely accessible. This is going to have significant repercussions for the structure of financial markets and institutions. By extension, it’s going to have significant implications not just for the nature of money and money creation, but also for monetary policy and its transmission and implementation, and for financial stability and the international monetary system.

Get a sneak preview of the top stories from the weekend’s Barron’s magazine. Friday evenings ET.

Let’s talk specifics. How will the banking industry fare as a result of this transformation?

Commercial banks are facing serious challenges to their business models because of these new forms of financial intermediation and new technologies, like blockchain-based payment systems and other fintech payment platforms, which are handling international payments. That has traditionally been a big profit center for multinational banks, and it’s going to become much more competitive.

The emergence of new financial institutions and platforms will improve competition, promote innovation, and reduce costs, improving the working of the financial system. But it will also pose significant complications for regulation and financial stability. The weakening of banks carries its own risks, given their important role, including in credit creation.

The traditional instruments in normal times, such as the discount rate and the targeted federal funds rate, could have less traction if commercial banks have a diminished role in financial systems. When a central bank changes the policy rates that it directly controls, it affects interest rates on commercial bank deposits and loans in a way that is reasonably well understood. The corresponding effects on the lending rates of other institutions and platforms are much less clear. This makes it harder for a central bank to manage the economic variables it cares about—inflation, unemployment, and [gross domestic product] growth.

It’s also not clear how effective the Fed can be as a lender of last resort if institutions not directly under its regulatory purview play a larger role in financial markets. For example, it would be tricky for the Fed to provide access to emergency liquidity facilities for fintech platforms that it doesn’t regulate. The rise of digital finance built on decentralized blockchains could accelerate these shifts and, for all its benefits, also pose challenges to monetary and financial stability.

What scenario would lead to instability?

Amazon.com
[AMZN] issuing stablecoins [digital currencies pegged to a national currency, such as the dollar] that get a lot of traction within their own ecosystem, but they could also issue their own, unbacked currencies that could compete with existing fiat currencies. Perhaps the dollar won’t be threatened, but if you have a digital yuan, a digital dollar, and also a Facebook or an Amazon coin available around the world, this could pose an existential threat to the currencies of small economies or those that don ‘t have a credible central bank. We could get a real shakeout in terms of the international monetary order. There’s also the risk that many of these other currencies are used for illicit commerce, and it becomes much harder to regulate them. After all, Bitcoin knows no borders.

Cryptocurrencies have lost about $1 trillion in market value since November. Is this the beginning of the end?

Bitcoin was intended to serve as an anonymous medium of exchange that could allow financial transactions without relying on central-bank money or trusted third-party intermediaries. Bitcoin has failed in that, so it has no intrinsic value. Its value is underpinned purely by investors’ faith, which seems to be based on its scarcity. But scarcity itself cannot be a durable source of value for a digital asset. The recent plunge in the price of Bitcoin and other cryptocurrencies as the Fed gets set to hike rates makes clear that Bitcoin is also not much of an inflation hedge, as some had assumed. There is a legitimate concern that this is a speculative mania that could end badly. More price volatility is a certainty.

Could the selloff create broader ripples in the crypto ecosystem?

The prospect of a lot of retail investors getting burned is a serious risk. If the shine comes off the cryptocurrency revolution, it could deter some of the developments in decentralized blockchain-based finance that have significant benefits.

The real legacy of Bitcoin is blockchain technology. That is a marvel. Blockchain technology will give us the potential to improve various aspects of public governance. For example, India is considering putting land ownership records on a digital ledger, providing much greater security, resiliency, and transparency. [Blockchain] is also seeding the creation of decentralized finance, which has enormous potential for creating new products and services and making them easily accessible by connecting savers and borrowers through fintech platforms. It could, for example, lead to bespoke financial products and services at a low cost for less well-off individuals. That’s going to be a fundamental transformation in finance.

How could this go wrong?

The whole point of decentralized finance is that no one institution becomes very important, but there can be unintended consequences where some operators dominate the system. [There’s also the risk that] the huge disparities in terms of finance and digital access and digital literacy could be exacerbated rather than mitigated. Most importantly, if you start having central-bank digital currencies and corporations such as

Amazon
issuing stablecoins that gain traction, governments and major corporations could become even more intrusive into our lives. There is a lot of promise for better economic outcomes, but also the risk that we tip over into a much more dystopian world than we already live in.

What are the geopolitical risks created by a world where economies are reliant on digital money?

Finance is the lifeblood of any major economy. We could be setting ourselves up for a world where cyberwarfare becomes the primary battleground for geopolitical dominance. It creates a huge amount of vulnerabilities because payment and financial systems are vulnerable, and they could take down an entire economy or country if they are consistently hacked into.