INVESTING EXPLAINED: What you need to know about fintech – from challenger banks, to investing and payments technology

In this series, we bust the jargon and explain a popular investing term or theme. Here it’s fintech.

The term, a combination of ‘financial’ and ‘technology’, covers the software-driven companies that automate the delivery of financial services, including banking, investment management, insurance and cryptocurrencies.

The aim is to improve the experience of customers, while undermining the sway of the traditional names in the field. The companies that provide these services, either online or via an app, have themselves come to be known as ‘fintechs’. 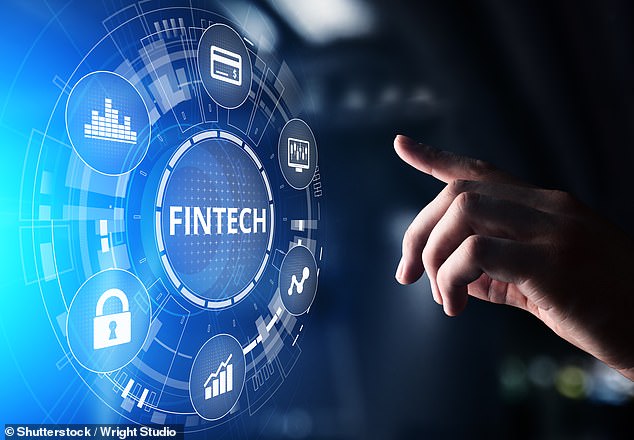 Pointing the way: The companies that provide these services, either online or via an app, have themselves come to be known as ‘fintechs’

Which are the best known fintechs in the UK?

There are about 2,500 in the UK. But the powerful players are the ‘challenger’ banks, Monzo, Revolut, Starling and Zopa.

These challengers strive to disrupt the business model of the high street names and they have pulling power.

Monzo has 5m customers. Starling, whose investors include Fidelity and Goldman Sachs, is valued at £2.5billion. Its founder and chief executive is Anne Boden, unusual in the male-dominated fintech industry.

Last year, a Government-commissioned report by Sir Ron Kalifa, the former boss of Worldpay, laid out five recommendations that would enable these and other fintech companies to produce a ‘digital big bang’, creating growth and job opportunities.

These are yet to be implemented, but this year’s Queen’s Speech gave hope that this could happen.

HOW THIS IS MONEY CAN HELP

Which is the world’s most famous?

The Silicon Valley-based Stripe, founded by the 30-something Irish brothers Patrick and John Collison. A fund-raising last year valued this business, which makes software for the processing of e-commerce payments, at $95billion (£77.8billion). Its customers include Amazon, Google and Shopify.

It was rumoured that Stripe, which is reported to be profitable, would float on the stock market this year, but investors have fallen out of love with tech stocks. It remains bent on global expansion, however.

And the second most famous?

Probably Klarna, the Swedish buy now, pay later (BNPL) group. BNPL, which until lately was a fast-expanding business, enables online shoppers to pay by instalments, rather than use credit cards.

Last month, however, Klarna warned that it was being hit by the cost of living crisis and would be cutting jobs. The loss-making firm was most recently valued at $46billion (£37.7billion).

But it is now facing greater regulatory scrutiny and competition from the high street banks, other fintechs like Zopa and Apple, all of which are moving into BNPL.

The challenger is being challenged.

Who are the backers of these businesses?

Such is the hope for the future profitability of this sector that it attracted $125billion (£102billion) from venture capitalists in 2021.

But there are now concerns that some of the valuations of these businesses may have been overhyped at the time of the love affair with tech stocks. This has become apparent with the fall in the share prices of US insurance technology (insurtech) companies like Lemonade, Hippo and Root.

Lemonade’s shares are down 85 per cent over the past 12 months. The company provides home and pet insurance and will soon offer car insurance. Its aim is to break down the distrust between customer and insurer.