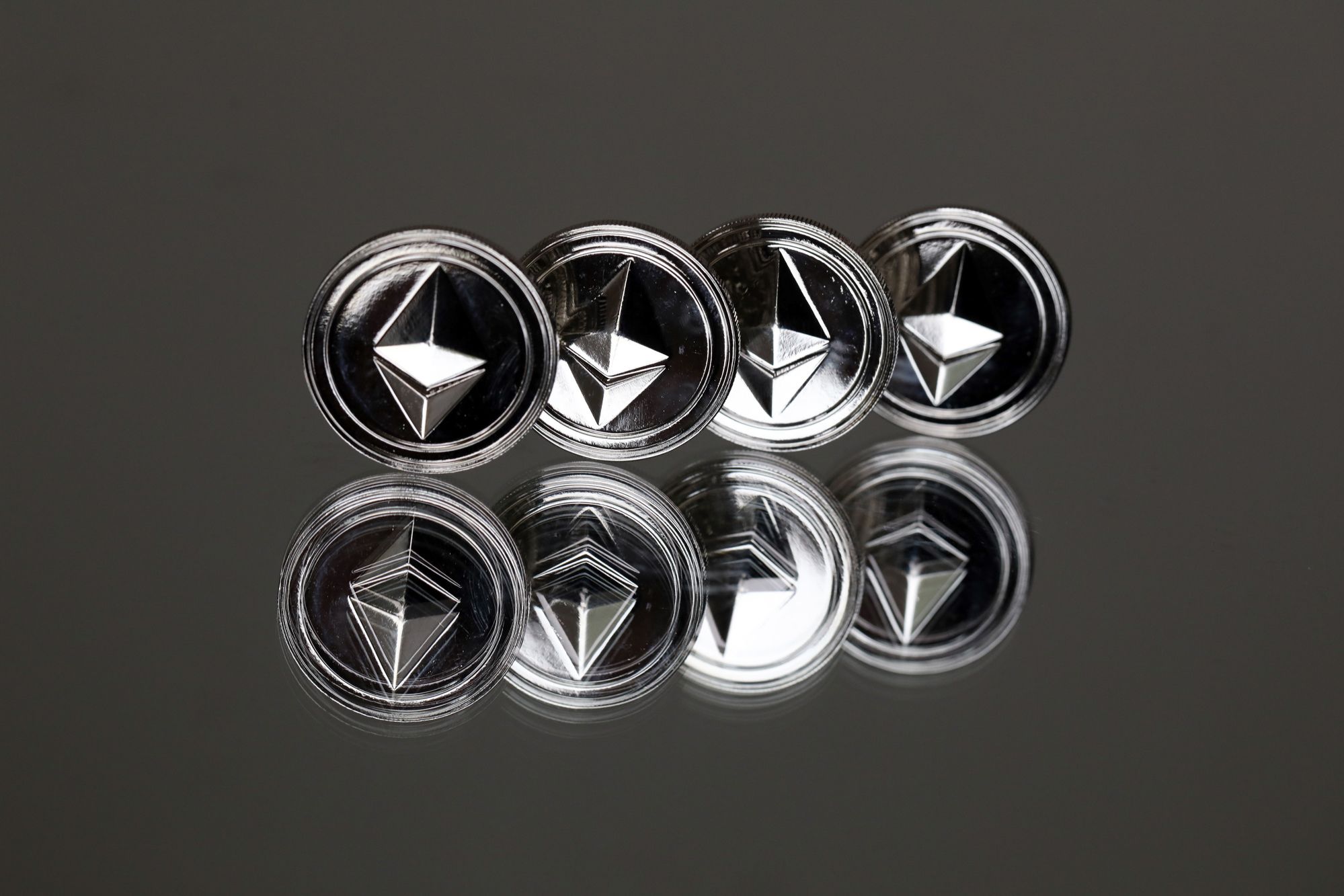 A collection of ethereum tokens sit in this arranged photograph in Danbury, U.K., on Tuesday, Oct. 17, 2017. On Wednesday, billionaire Warren Buffett said on CNBC that most digital coins won’t hold their value.

(Bloomberg) — After much celebration over the successful transition of Ethereum, the question remains what’s next for the most commercially-significant crypto project.

Most Read from Bloomberg

The long-awaited software revision, termed the Merge, shifted the blockchain from a so-called proof-of-work system to a more energy efficient proof-of-stake method for securing the network. There was no changes related to network transaction costs or speed, which are common gripes among Ethereum users.

Completing the upgrade without any software downtime is a brilliant engineering feat, said Harsh Rajat, the Mumbai-based co-founder of Ethereum Push Notification Service or EPNS. “Akin to changing the foundation of a skyscraper while it still remains standing!”

Now developers will address a key existential question. The Merge was the first step toward a series of upgrades on Ethereum to solve the scalability trilemma. After some point, the theory suggests that a blockchain has to compromise on one of its three key aspects — scalability, decentralization and security. And that a blockchain cannot have all three at the same time.

For Ethereum the first step to solve this problem was moving to POS with the merge and next comes four more phases of development.

The Surge: Implementation of sharding, a scaling solution which will lower the cost of bundled transactions on Ethereum.The Verge: Introduction of ‘verkle trees,’ an update which will make the network more decentralized by making it easier for users to become validators.The Purge: Elimination of historical data and technical debt.The Splurge: Miscellaneous updates after the first four stages to ensure smooth functioning of the network.

“The ultimate aim for all these upgrades is to make Ethereum more scalable, faster and cheaper to use,” said Aditya Khanduri, head of marketing at Biconomy, a protocol that helps improve user onboarding and transaction experience on decentralized applications.

“It’s hard to talk about the timelines of the following four stages because all of them are still under active research and development. But, in my opinion, it will easily take 2-3 years before all phases are complete,” said Sameep Singhania, co-creator of QuickSwap, a decentralized exchange built on Ethereum scaling solution Polygon.

The network will eventually be able to process 100,000 transactions per second after the completion of these five stages, according to Ethereum co-founder Vitalik Buterin.

In the meantime, more investors in Ether, the native token of the network, are expected to lock up their tokens in digital wallets that earn their owners a return under the new proof of stake format. But they won’t be able to take them out, at least not for a while.

Locked Ether plays a vital role on the upgraded network. Wallets with what’s being referred to as staked Ether are being used to help order network transactions. Currently, about 11% of Ether is already locked up — either directly or via providers such as Lido, Coinbase Global Inc. and Kraken — in staking wallets on the Beacon Chain of Ethereum that was used to test the process, according to blockchain analytics firm Nansen.

Ethereum will have to undergo yet another software change dubbed Shanghai, which is at least six months away, to enable withdrawals of the staked Ether. Even then, the withdrawals will be capped.

“After the Merge, the Ether locked in the staking contract would still not be available to withdraw,” said Kunal Goel, a research analyst at Messari.

Ethereum developers are also working on something called EIP 4844, or Proto DankSharding, that seeks to minimize the high network transaction costs referred to by users as gas fees, Goel said.

Most Read from Bloomberg Businessweek