Crypto: ‘There is no regulation’ that protects consumers, former FDIC CIO says 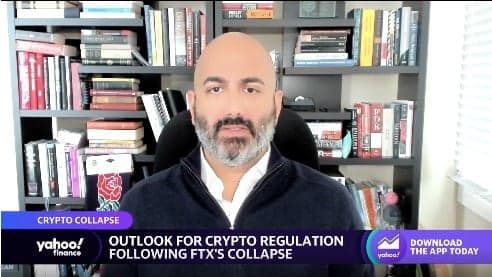 GARY GENSLER: There’s nothing incompatible about our securities laws and crypto. It’s really just that there’s sort of a worldwide market. Much of this is offshore.

I can’t speak to any one matter, but I can quote from the bankruptcy court that just 2% of the customer assets at FTX were US.

– That was SEC Gary Gensler there, speaking with our very own Jen Schonberger on the scope of the crypto market and how much of an international issue it is to regulate.

Meanwhile, India, now at the helm of the G20, has hinted that crypto regulation will be a priority for the group as it looks to build policy consensus around these digital tokens.

Joining us now for more on the implications for crypto and the economy in the wake of FTX’s collapse is former Federal Deposit Insurance Corporation CIO Sultan Meghji. Sultan, thank you for joining us today.

There does seem to be a bit of a disconnect between what Gary Gensler is saying is available for crypto investors versus crypto investors really trying to make sense of this patchwork approach. Where is the truth in all this?

SULTAN MEGHJI: Well, the patchwork approach, that’s a great way to say it. There is no consensus on this, even inside of the United States.

There are roughly 175 different financial regulatory bodies here in the United States, and each one of them has, to a degree, its own opinion on whether they have the authority over this, what their authorities are, or whether or not they have the ability to examine or analyze some of these firms.

And then your comment about being multi-jurisdictional, multinational, is a big deal. Everything from the G20 to the European Central Bank to the guys in Basel to the Federal Reserve to the Bank of Japan, everyone has a different view on this, and there’s absolutely no consensus.

And in some places, it’s entirely illegal. In other places it’s entirely built into the financial regulatory environment already. And it’s going to take quite a while for any sort of consensus, and then policy and rules around that to get rolled out.

– So with that in mind, then talk about some of the banking relationships because some companies think that some of these deposits are FDIC insured, and then it turns out that they’re not. How do you actually make sure that you’re actually doing this the right way so that you don’t get that tap on the shoulder?

SULTAN MEGHJI: Well, you know, speaking for any American listening to this, I’ll say it’s very simple. There is no regulation around crypto that protects you at all. It is entirely outside of the financial ecosystem. You are playing, to a degree, in the riskiest market available.

The vast majority of the activity happens outside the United States. So if you were to put a dollar into any sort of crypto function and something doesn’t go the way you want, you are entirely on your own.

FDIC insurance is only for American banks that are part of the Federal Deposit Insurance system, and there’s only about 4,500 of them. And there are about another 5,000 credit unions, but that’s it.

There’s no insurance. There’s no protection. You can’t call up the SEC if one of these digital assets loses value and you feel like you’ve been taken advantage of.

As we’re seeing with FTX, they had their own token. They were running a hedge fund on the side. And it’s going to take years just for the FTX “bag of spaghetti,” I like to say, to get untangled enough so that people can understand what happens. And as it stands, about $8 billion is missing, and I think it’s very unlikely too many people are going to get their money back.

– And we keep seeing these calls, obviously, for more global regulation because FTX, having some entities in the Bahamas, really making it difficult to really try and understand who should be governing what at this point.

Obviously, the majority of FTX’s transactions happening in the US, that helped with the jurisdiction there. But what does this mean in terms of global coordination on this? We saw India’s central bank are saying, look, unregulated crypto could lead to the next financial collapse.

SULTAN MEGHJI: Yeah, it’s a huge problem right now because there is no single, unified system for financial regulation globally. The G20 is obviously one body.

There are a myriad of international agreements and standards, whether it’s between groups of nations or individual nations relative to each other. And until some sort of structure comes into play, at something like a United Nations level or something globally, it’s not going to go anywhere.

It’s quite a challenge right now because the global financial order came out of Bretton Woods after the end of the Second World War, as I’m sure some people who know their history know. And out of that, only because of that kind of massive cooperation at the end of World War II to then rebuild Europe, did we create the monetary system we’re sitting inside of right now.

There hasn’t been yet that kind of global coming together to really do something about this. The Bretton Woods Committee currently has a program around this that’s going on, but the participation at the Central Bank level, which is really where a conversation like this should live, hasn’t really kicked off.

– So then if you had to just name one policy recommendation that you would have to at least try and get the ball rolling in a meaningful direction to give people some clarity, what would that be?

SULTAN MEGHJI: Yeah, it’s a great question, and I wish I had that perfect 10-word answer that people in the media love to have. But the simplest thing, I’ll answer it in two parts.

Part number one, if you’re an average person who wants to get into crypto, just recognize that it is entirely unregulated. There’s no security. There’s no insurance. There’s no nothing. And so, think about it from a risk perspective like that.

Here in the United States, there are, I think, seven different pieces of legislation working their way through Congress and have been for years, but it’s never managed to make it really out of committee into something that should be legislated.

So the biggest thing is for legislation to get passed that really nails where all of these different digital assets land inside of the regulatory system and who is accountable to ensure that they are regulated correctly.

– I’m sure the FTX collapse giving them a bit more motivation, at least, to go a bit faster on that. A big thank you to former Federal Deposit Insurance Corporation CIO Sultan Meghji for joining us this morning.