Don’t blame Chaim Bloom. It’s ownership that did this to the Red Sox, and other thoughts 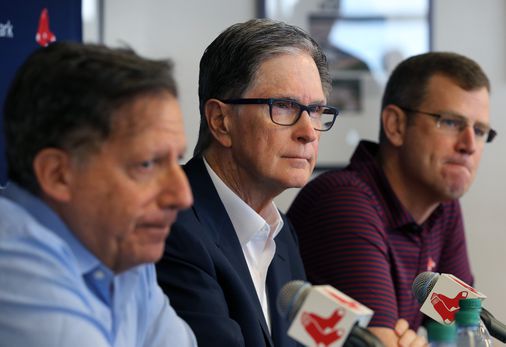 ▪ Chaim Bloom is having a horrible offseason, but he’s not the sole reason the Red Sox are bad.

It’s not Chaim. It’s not Alex Cora or Alex Verdugo. It’s not Joe Castiglione, Wally The Green Monster, or his sister, Tessie.

It’s ownership. It’s John Henry, Tom Werner, and whoever else is directing baseball ops to seek value over winning. Mookie and Xander are gone with virtually nothing in exchange, and the last Sox star — Rafael Devers — has a foot out the door. Fangraphs reports that the Red Sox — ever a top-five spending team — have dropped to 12th in cash payroll.

What is happening to the Red Sox is a direct result of ownership decisions made late in the 2019 season, after Dave Dombrowski was fired. That’s when they decided to put the bottom line above winning. And that’s why the Red Sox — while charging the highest ticket prices in baseball — have only one healthy star left on a team that will be a consensus favorite to finish last for the third time in four seasons.

All of baseball America sees it now. In the wake of Boston’s disastrous performance at the Winter Meetings, Red Sox owners are taking heat from well-respected, no-agenda, baseball experts.

Ken Rosenthal of Fox Sports and The Athletic this past week wrote, “Red Sox ownership deserves as much, if not more blame for the franchise’s current inertia . . . they’ve failed to read a changing marketplace . . . any analysis of [Bloom’s] shortcomings should start with the people who manage the Red Sox’ purse strings, the people who hold the ultimate power.”

Former New York Times scribe Buster Olney, now with ESPN, tweeted, “What [Mets owner] Steve Cohen has done — committing many hundreds of millions of dollars to improve his team — makes it impossible for his fellow owners to cite financial challenges and be taken seriously (The best example: the Red Sox).”

ESPN’s Joon Lee reported that the Sox and Devers are “galaxies apart” in talks for a contract extension. Referencing Fenway Sports Group’s never-ending quest to acquire more teams, Lee wrote, “Red Sox fans are a huge reason John Henry can build FSG into an international sports conglomerate, why the valuation of the team has risen from $380 million to an estimated $3.9 billion, according to Forbes. FSG is playing with fire right now.”

FSG built this empire largely on the backs of Red Sox fans. And now the owners have turned their backs on you as they seek new teams for their portfolio.

After Dombrowski’s departure, the Sox said their focus was on building a system that produces contenders year after year, but three years later, things look a lot like the recent past. They again opened the door for another homegrown star to leave by not taking care of the matter when they had exclusive negotiating rights, then, in the eyes of many in the baseball world, overpaid for a decent player from Japan.

How’s that for a lump of coal in your Red stocking?

▪ Thought I knew everything about 1960s Boston sports but only this past week learned of the existence of a 1966 record album of organist John Kiley’s greatest hits (“Red Sox Organ Music”) with Sox shortstop Rico Petrocelli playing drums. Hope there’s one under my tree Sunday morning.

▪ Spoke with Satch Sanders, 84, about his longtime teammate and friend, Bill Russell, for the Globe’s Bostonian of the Year issue last weekend. Space limitations trimmed some of Sanders’s comments, so I thought I’d share Satch’s take on Russell and American/Boston racism at the time they played together for the Celtics: “We all were going through those kinds of things we could do nothing about . . . We’re talking about America. So we’re talking about many, many opportunities to come into contact with racism across the country. There was no city that we ever went to that we didn’t have to encounter that foolishness. None. Which meant we had plenty of time to talk about situations that occurred. Boston was no different from New York or Los Angeles. You couldn’t get a cab to come to Roxbury. I couldn’t get an apartment in the Back Bay. The real estate people kept driving by me. There were all kinds of incidents.

“When Russell talked about it, he made it very personal. He’d say Boston was one of the most racist places that he’d ever been. But of course his situation was based on his experiences in Revere and Reading. Very personal stuff and very angry stuff. So when he said what he said, he was coming from the base of experience. People act like, ‘Well, that can’t be Boston.’ They were talking about the entire area. But they were just lying to themselves because it was going on in all American cities.”

▪ Patriots wide receiver Jakobi Meyers goes into the local sports Stand-Up-Guy Hall of Fame for taking every question and all the blame for last Sunday’s fiasco ending in Las Vegas. Adrian Gonzalez would have said it was “God’s will.”

▪ How many “must-win” games can one NFL team play in a season?

▪ Is anyone aware that the World Cup’s wide fields mean the Patriots will have to remove some sideline seats when Gillette Stadium hosts World Cup games in 2026? No doubt, the big-revenue-generating seats will be restored for NFL football.

▪ Jayson Tatum missed last Sunday’s Celtics home loss against the Magic because of what the team termed “personal reasons,” after posting photos from his son’s birthday party on Saturday in St. Louis. Not very MVP of him.

▪ When Charlie Baker takes over as president of the NCAA, he should find a way to kill UMass’s FBS football program, then reinstate UMass’s 2017 Atlantic-10 women’s tennis championship, which was taken away because of a phone bill.

▪ Speaking of the NCAA cesspool, nice of Colorado to re-neg on scholarship commitments made to high schoolers before Deion Sanders was named football coach. The Athletic reports that 13 recruits left after Sanders was hired — this after the Colorado athletic director promised that the school would honor its commitments. Contacted by The Athletic to explain himself, AD Rick George said, “Despite the unfortunate timing of the current recruiting calendar, difficult decisions were made as timely as possible.” Swell. Hope the Buffaloes lose every game.

▪ Get a load of the video of Cale Makar of the Avalanche declining a power-play opportunity after an NHL official thought Makar was tripped by the Islanders’ Mathew Barzal. Not wanting to be marked as a flopper (maybe he hates Bill Laimbeer), Maker told the referee that he merely slipped, and the penalty was waved off. Colorado won, 1-0 in a shootout.

▪ The CEO of the surging Detroit Lions is Mike Disner, who worked for Dick Quinn in the Williams College sports information office before graduating in 2006. Disner got his NFL start with the Patriots.

▪ Former Red Sox pitcher Bronson Arroyo is releasing an album with 10 original songs Feb. 17 and will perform live with his band at The Burren in Somerville Jan. 11.

▪ Tom Coughlin, one of the finest men to ever grace the sports world, has written a book, “A Giant Win.” Coughlin coached Boston College football back in the 1990s and beat the Patriots in a couple of Super Bowls. Coughlin told the New York Times that the Giants victory over the undefeated Patriots in Arizona in February 2008 was “the best Super Bowl game ever and certainly the greatest upset of all time.’’ Regarding the Giants’ strategy to stop Tom Brady, Coughlin said, “We knocked him down on their first play from scrimmage and 16 more times, including five sacks. It’s why we won that game.” Coughlin, 76, spent the last several years as his wife’s caregiver. Judy Coughlin, afflicted with an incurable brain disorder, died last month.

▪ I find it amazing that Staples Center is now known as Crypto.com Arena. It reminds me of when Houston’s Minute Maid Park opened as Enron Field in 2000.

▪ Austin Burton, son of Channel 4′s Steve Burton, will be Purdue’s starting quarterback against LSU in the Citrus Bowl Jan. 2.

▪ RIP former Bruins captain Don McKenney, who played with the Bruins from 1954-63, then worked at Northeastern for Fern Flaman as an assistant coach for two decades before becoming head coach of the Huskies. “As a kid watching the B’s he was one of my favorite players,” former Boston University coach Jack Parker said this past week. “I got to know him in my coaching days and was always impressed by his quiet manner. A true gentleman. Big loss for our hockey community.”

▪ RIP Denny Doyle, second baseman for the 1975 Red Sox, who hit safely in 9 of 10 games in that magical postseason.

Dan Shaughnessy is a Globe columnist. He can be reached at [email protected]. Follow him on Twitter @dan_shaughnessy.